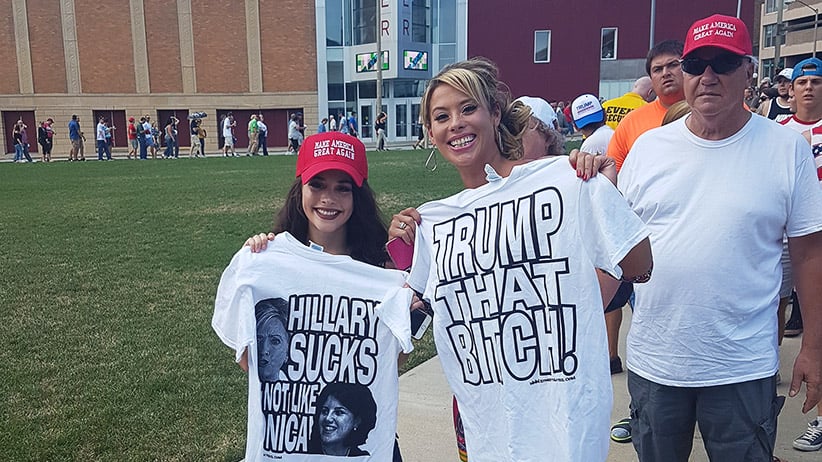 I was in line at the Trump rally for all of 18 seconds before I overheard the two middle-aged women discussing President Barack Obama’s citizenship.

Moments later, a guy walked down the line selling t-shirts. On the front it said, “Hillary sucks, but not like Monica.” On the back, just “TRUMP THAT BITCH!”

Two well-dressed women—a mother and daughter—both bought shirts. They proudly held them up for me so I could take a picture.

All this was, frankly, a thrill.

Like a lot of Canadians, I’ve been watching the Trump phenomenon south of the border with a mix of bemusement and horror. I obsessively watch Twitter, following the near-daily Trump eruptions—mocking a disabled reporter, getting into a fight with the family of a dead soldier, intimating that his supporters should physically attack protesters, and so many more.

He can’t win. Or, at least, even in its most generous projection, data journalism website FiveThirtyEight gives him less than a 22 per cent chance. The polling averages—both nationally and in the key swing states like Ohio, Florida and Pennsylvania—all put Trump well behind Clinton.

But even though his candidacy is likely doomed already, the Trump campaign feels significant. To many, the economic system feels rigged in favour of the one per cent, and every few months ISIS commits a horrific act of violence on the West. In the face of that reality, a big chunk of the electorate is clearly thirsty for exactly the brand of demagoguery Trump is offering. Nuance is hard. Isolationism is easy and seductive, if it means keeping the terrorists and immigrants out, and those good manufacturing jobs in America.

Trump may be the beginning of an ugly trend in North America that could play a major role in politics for much of the coming decades. If the current polls are borne out, tens of millions of people will vote for him. And even when he loses, these people aren’t going away. They’ll still be angry and hungry for somebody else promising simple solutions to make America great again.

Call it disaster tourism, but I just wanted to see it for myself.

I arrived in Erie, Penn., two and a half hours before the rally, amazed to find a line that snaked along the sidewalk for two and a half blocks from the hockey arena. One man said he showed up five hours early.

Inside the arena, standing about 10m away from the podium, was a friendly middle-aged lady, who told me a bit about Erie—a classic rust-belt community on the shores of the Great Lakes, in the northwestern corner of Pennsylvania. The economy has been bad for a while, and with the General Electric locomotive plant slated to downsize, things are going to get worse.

It all reminded me a bit of Newfoundland and Labrador, where I live.

Headlines about mines shutting down, and fish processing plants closing are routine, and young people moving “away” for work is a way of life. Economic hardship is real, and the foreigners are often blamed—be it the Spanish trawlers that wrecked the cod fishery, or Bridgette Bardot who unfairly maligned the seal hunt.

In Newfoundland and Labrador, people pride themselves on being friendly to outsiders, but it’s an overwhelmingly white province, and if you scratch the surface a little bit, you’ll find hints of xenophobia and cultural intolerance.

But Newfoundland and Labrador has never had a politician like Trump.

In Erie, there was a deep, visceral, indulgent hate on display. People spontaneously booed and jeered at the media, and did so especially enthusiastically after Trump castigated CNN. When I asked one woman near me which reporter on the nearby platform was CNN, she responded, “CNN is the devil.”

At another point, two people were discussing whether Hillary Clinton was literally Satan. “I call her Lucy. Because she’s the daughter of Lucifer,” one woman said.

Another group of people speculated about Clinton’s health—she probably has Parkinson’s, one surmised—and called Bill Clinton a sexual predator. A woman wearing a “Hillary for prison” shirt repeatedly tried to start, “Lock her up!” chants, and succeeded a couple times.

Trump gave one of his signature freewheeling speeches, repeatedly getting distracted by shouts from the crowd, prompting him into diversions on the supreme court and the Trans-Pacific Partnership trade deal.

Trump talked about his most recent controversy—claiming falsely that Obama was the founder of ISIS—and said he was being sarcastic. Then he immediately followed up by saying, “But not that sarcastic, to be honest with you.”

Trump read the lyrics to the song “The Snake”, by singer-songwriter and social activist Oscar Brown Jr., about a “tender woman” who rescues a snake only to receive a “vicious bite” in the end. In Trump’s telling, the snake is a metaphor for Syrian refugees and the tender woman is America. At around this time, a woman shouted, “We are a Christian nation!”

Trump promised to do something about that the General Electric locomotive plant in Erie along with blocking the cheap steel coming from China, and taking back all the jobs stolen by Mexico.

Through all of this, the crowd cheered, and chanted, and jeered at the protesters who periodically interrupted. I told people that I was a Canadian, but neglected to mention that I was a journalist. People were friendly, and excited that I came all the way from Newfoundland to see Trump speak.

The experience was intense and uncomfortable, but I never felt unsafe. (But then, of course, I’m a white man.) These were normal people, just giving themselves over to the alluring simplicity of hatred.

Leaving the arena, everyone appeared to be smiling, inspired. It made sense. Somebody was to blame for Erie’s troubles, and somebody else was promising to fix it.

I was rattled, though. I don’t think there’s any more disaster tourism in my future. There’s something ugly about going out of your way to experience somebody else’s disaster.

And no two ways about it, Donald Trump is a disaster, of a sort that I hope we never see here at home.

James McLeod is the political reporter for the Telegram in St. John’s, N.L., and author of Turmoil as Usual: Politics in Newfoundland and Labrador, and the road to the 2015 election