The travel ban from several Muslim nations is dismantling any goodwill the U.S. has built up, and boosting Iranian influence 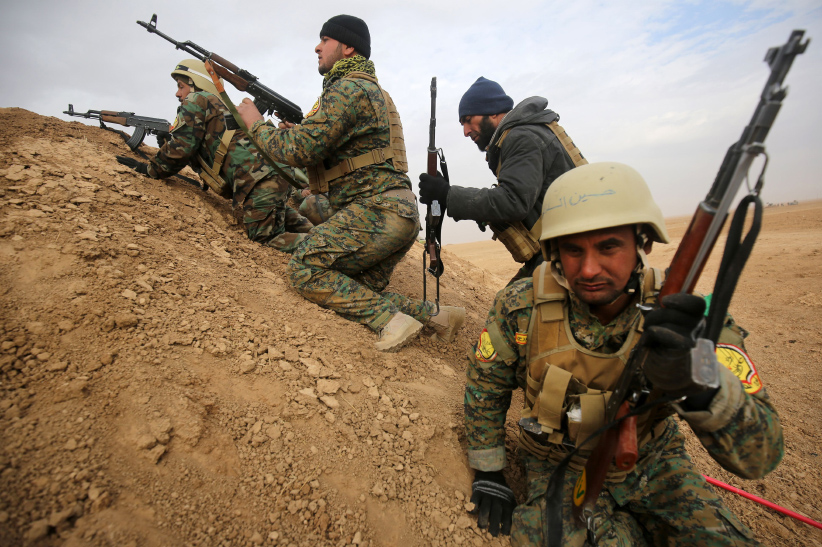 Shiite fighters from the Hashed al-Shaabi (Popular Mobilisation) paramilitary units advance towards the village of Shwah, south of the city of Tal Afar on the western outskirts of Mosul, on December 13, 2016, during an ongoing operation against Islamic State (IS) group jihadists. (Ahmed Al-Rubaye/AFP/Getty Images)

It’s been a week since U.S. President Donald Trump temporarily banned travel to the U.S. from seven Muslim-majority countries. Over those seven days, Trump has tried to downplay the consequences of what some members of his own administration have called a poorly thought out and implemented policy.

But Trump, as we’ve all come to expect, has doubled down, tweeting on Jan. 30 that “all is going well with few problems.”

But things are going anything but well. Since the ban was put in place, a growing chorus of world leaders, U.S. diplomats, and experts have warned of the unforeseen and potentially catastrophic consequences it could trigger. The war against the so-called Islamic State, which relies on coordination with some of the countries on the list, could be under threat. Perceptions in other parts of the Muslim world, where anti-American sentiment remains entrenched, could plummet even further and lead to an increased threat for Americans.

The inevitable is already coming to pass here in Iraq where the ban has sparked fury and outrage. On Jan. 30, three days after the ban was imposed, the Iraqi parliament voted on a motion urging Prime Minister Haider al-Abadi to put in place a reciprocal ban on Americans. One would have expected the Iraqis to come out strongly in favour of such a ban. But the result, according to one Iraqi politician, wasn’t as clear-cut.

The dissension, Shangali added, wasn’t surprising. Since its inception, the post-Saddam Hussein Iraqi parliament has been riven by factions, each with their own interests. Shia parliamentarians with strong ties to Iran voted overwhelmingly in favour of the ban while Kurds, who enjoy a close relationship with the U.S., voted against it, or abstained. Sunnis were split while supporters of Abadi, who opposes any move that would risk the ongoing Mosul offensive, heavily reliant on U.S. airstrikes and American advisors embedded with Iraqi forces, opposed it as well.

In the end, Abadi overruled the parliament, sparking anger among his opponents. Moqtada al-Sadr, an influential Shia cleric who led a powerful militia that fought U.S. forces in Iraq in the mid-2000s, came out strongly in favour of kicking Americans out.

“It would be arrogance for you to enter freely Iraq and other countries while barring them the entrance to your country,” he wrote on his website. “And therefore you should get your nationals out.”

The ripple effects spread from there. On Jan. 29, the spokesperson for the Popular Mobilization Units (PMU), a loose alliance of Iranian-trained Shia militias, including one that is on the U.S. list of foreign terrorist organizations, echoed Sadr’s demand.

Shangali warned the ban would strengthen Iran’s hand if it wasn’t modified to reflect the sacrifices Iraqis have made in the fight against the Islamic State. The PMU is increasingly making its presence felt in and around Mosul, despite promises that it would not enter the city. Human rights organizations have warned that its forces have engaged in widespread abuses against Iraq’s minority Sunnis.

“After Daesh is defeated,” Shangali added, using the Arabic acronym for the Islamic State, “the problems will come. Because of this ban, the U.S. has made it harder now to counter Iranian influence in Iraq. Beyond the Kurds, it has few friends left, but even Kurds are upset because the ban affects them as well. If there was any goodwill from the help the American military has given the Iraqi army, it is gone.”

More worryingly, he added, U.S. civilians in Iraq now face a more hostile local population, particularly American journalists covering the Mosul offensive who regularly come in contact with the PMU. Shangali pointed out the “special hatred for Americans” that elements in the militia harbour, and that hatred is now likely to increase.

For the time being, American journalists who spoke to Maclean’s said they are not changing the way they work or limiting their contact with PMU fighters, though the ban has sent a chill through their community.

The travel ban, Trump has said, is meant to keep Americans safe. In a memorandum signed on the same day, instructing the Pentagon to draft a more aggressive plan to defeat the Islamic State, Trump named four Americans the group has murdered, including journalists James Foley and Steven Sotloff. His policies could very well lead to the deaths of more.