Why Vicente Fox is so good at trolling Trump

The former Mexican president has been getting under the U.S. president's skin. And Canada has reportedly had to step in. 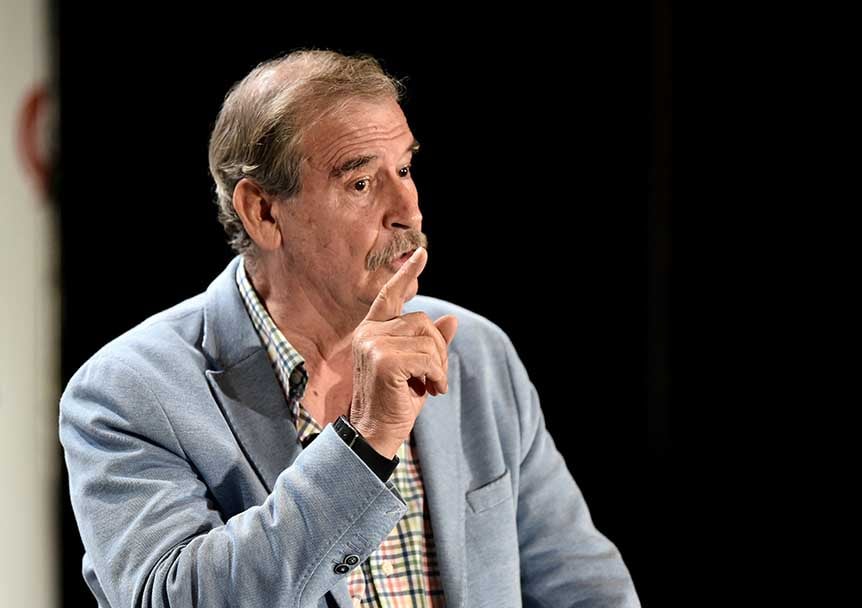 The day of Donald Trump’s address to a joint session of Congress, former Mexican president Vicente Fox took to patriotically trolling the U.S. president on Twitter. “That’s right! .@realDonaldTrump can’t mess with Mexico, we’re bigger than your #F–kingWall. I won’t stop standing up for my country.”

As the speech started, Fox tore into Trump: “.@realDonaldTrump is Condemning hate and evil, then he should start by example and take back his hateful words. #JointSession”.

And when Trump talked of building a border wall, Fox couldn’t resist tweeting another profanity (edited here): “.@realDonaldTrump wants to stop extremists with walls and war. Go and build the #F–kingWall around you and spare us from your evil.”

MORE: Why Canada shouldn’t throw Mexico under the bus

Fox is getting worldwide attention for his angry tweeting at Trump in often-misspelled English. His trolling reflects the raw feelings that Trump’s anti-Mexico rhetoric stokes south of the border. And it comes as the Mexican government treads cautiously with its Trump dealings—seemingly still believing it can convince the U.S. President of the importance of what had been an increasingly close bilateral relationship.

Fox appears often on the very U.S. cable channels that the president spends inordinate amounts of time watching. Mexican columnist Carlos Loret de Mola, host of the influential morning show on broadcasting behemoth Televisa, recently wrote an article in the newspaper El Universal titled “Control Vicente Fox, Canada suggests to Mexico”.  He cited sources in the Mexican government, who were reportedly told on a recent trip to Toronto that Trump detested the trolling.

The messenger, Loret de Mola said, was former prime minister Brian Mulroney, who apparently passed along the friendly advice to tone down Fox’s tweets after spending time at Trump’s Mar-a-Lago club in Florida.

The suggestion to control Fox—not known for biting his tongue—shows the ex-president’s rising stature beyond Mexico. Even Conan O’Brien couldn’t resist inviting Fox to appear on his “Conan without Borders: Made in Mexico” program, where Fox showed off his cowboy boots and gave Trump the finger. “See you all this Wednesday with my pal @ConanOBrien where I trumped on Trump’s #F–kingWall with my cowboy boots,” Fox tweeted in advance.

Yet for all of Fox’s increasing fame abroad, he wields scant influence in Mexico’s public and political life. And many Mexicans seem to see Fox as more of a crazy uncle figure  rather than a senior statesman. “He’s a laughingstock in this country and no one really takes him seriously,” said Esteban Illades, editor of the Mexican magazine Nexos.

Like Trump, Fox was an excellent campaigner. He also came from a business background (previously running Coca-Cola Mexico), challenged an entrenched political elite and even mocked his main opponent in the 2000 election, calling him la vestida (the dress)—a challenge to the candidate’s masculinity. Fox cursed, campaigned in cowboy boots, wore a big belt buckle emblazoned with his name and presented himself as a macho ranchero.

Fox took on a truly rigged system in the campaign—one that had a history of stuffing ballot boxes and stealing elections to keep the long-ruling Institutional Revolutionary Party (PRI) in power—and he won, evicting the PRI.

Governing, however, was another matter. Economic growth was sluggish, the PRI steadfastly refused to negotiate in Congress and the change he promised never materialized (though his approval rating never dipped below 50 per cent). “Fox squandered one of the biggest political opportunities in modern Mexican history,” Illades said. “It’s as though he felt his only responsibility was bringing a change in party to the government.”

Fox searched for relevance after leaving office in 2006. He opened a presidential library, started criticizing the drug war and even announced the formation of an energy fund after the country opened up the oil industry—something the PRI opposed while Fox was in office, but undertook when it returned to power in 2012. Fox also spoke well of PRI candidate (and now president) Enrique Peña Nieto in 2012, while showing scorn for his own party’s candidate, stoking a sense of buyer’s remorse from a population that was reminded of the change he promised, but never delivered.

MORE: Should Canada and Mexico become the ‘two amigos’?

Then Trump arrived. Fox took to tormenting him, with good reason, say some observers. As governor of Guanajuato in the late-90s, Fox oversaw an influx of automotive investments, turning his state into an early NAFTA success story. He also appeared poised to achieve an immigration agreement, only to have the 9-11 attacks turn attention away from Mexico. “His allies now turn out to be Trump’s enemies, so Fox is being true to form,” said Federico Estévez, political science professor at the Autonomous Technological Institute of Mexico.

In Mexico, however, his messages often fail to stoke much excitement. Fox doesn’t meddle much in domestic matters anymore—despite Peña Nieto having a 12 per cent approval rating and being hit by scandals—except to criticize populists on the left. He oddly praised Peña Nieto and his inner circle as “smart” and “visionary” for inviting Trump to an ill-fated encounter in Mexico in August.

And sometimes his tweets turn cringe worthy, such as when he turned his wife’s birthday dinner into a Trump Twitter attack: “What do you know about Love? Or you just know about hating. How sad!” he tweeted at Trump, prompting some online to wonder whether he was drunk tweeting.

“Were he not so raw and a bumpkin this guy would always be in line to be an elder statesman,” said Estévez, who considers Fox “a natural Trump” at a time when a candidate with a Trump-type message could make hay in Mexico. “We don’t see politicians out there marshaling this in their favor,” Estévez said. “[Fox] can rave it up quickly like they do on pro wrestling and he has the mic. No other Mexican does this.”