Meeting with staged ceremony on a Singapore island, Trump and Kim came together for a summit that seemed unthinkable months ago 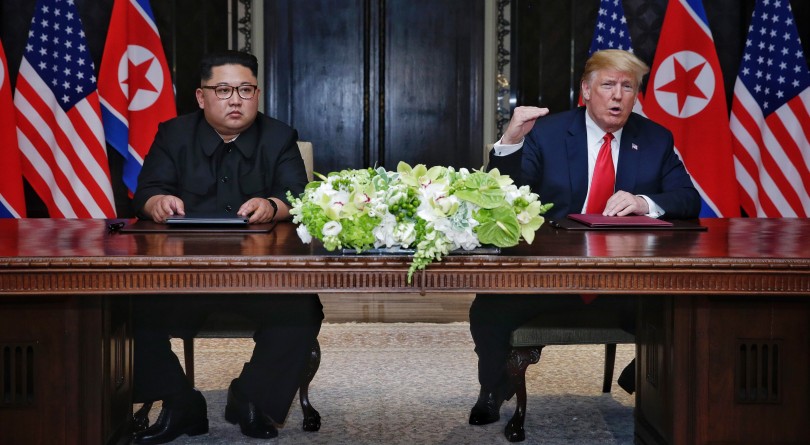 SINGAPORE – President Donald Trump and North Korea’s Kim Jong Un concluded an extraordinary nuclear summit Tuesday with the U.S. president pledging unspecified “security guarantees” to the North and Kim recommitting to the “complete denuclearization of the Korean Peninsula.” They coupled the summit agreement with lofty promises by Trump to handle “a very dangerous problem” and Kim’s prediction for “major change.”

Meeting with staged ceremony on a Singapore island, Trump and Kim came together for a summit that seemed unthinkable months ago, clasping hands in front of a row of alternating U.S. and North Korean flags, holding a one-on-one meeting, additional talks with advisers and a working lunch.

Both leaders expressed optimism throughout roughly five hours of talks, with Trump thanking Kim afterward “for taking the first bold step toward a bright new future for his people.”

Trump added during a news conference that Kim has before him “an opportunity like no other” to bring his country back into the community of nations if he agrees to give up his nuclear program.

Light on specifics, the document signed by the leaders largely amounted to an agreement to continue discussions as it echoed previous public statements and past commitments. It did not include an agreement to take steps toward ending the technical state of warfare between the U.S. and North Korea. (Story continues below)

Joint Statement of President Donald J. Trump of the United States of America and Chairman Kim Jong Un of the Democratic People’s Republic of Korea at the Singapore Summit.

President Donald J. Trump of the United States of America and Chairman Kim Jong Un of the State Affairs Commission of the Democratic People’s Republic of Korea (DPRK) held a first, historic summit in Singapore on June 12, 2018.

President Trump and Chairman Kim Jong Un conducted a comprehensive, in-depth, and sincere exchange of opinions on the issues related to the establishment of new U.S.-DPRK relations and the building of a lasting and robust peace regime on the Korean Peninsula. President Trump committed to provide security guarantees to the DPRK, and Chairman Kim Jong Un reaffirmed his firm and unwavering commitment to complete denuclearization of the Korean Peninsula.

Convinced that the establishment of new U.S.-DPRK relations will contribute to the peace and prosperity of the Korean Peninsula and of the world, and recognizing that mutual confidence building can promote the denuclearization of the Korean Peninsula, President Trump and Chairman Kim Jong Un state the following:

Having acknowledged that the U.S.-DPRK summit – the first in history – was an epochal event of great significance and overcoming decades of tensions and hostilities between the two countries and for the opening of a new future, President Trump and Chairman Kim Jong Un commit to implement the stipulations in this joint statement fully and expeditiously. The United States and the DPRK commit to hold follow-on negotiations led by the U.S. Secretary of State, Mike Pompeo, and a relevant high-level DPRK official, at the earliest possible date, to implement the outcomes of the U.S.-DPRK summit.

President Donald J. Trump of the United States of America and Chairman Kim Jong Un of the State Affairs Commission of the Democratic People’s Republic of Korea have committed to cooperate for the development of new U.S.-DPRK relations and for the promotion of peace, prosperity, and security of the Korean Peninsula and of the world.

The pair promised in the document to “build a lasting and stable peace regime” on the Korean Peninsula and to repatriate remains of prisoners of war and those missing in action during the Korean War.

Language on North Korea’s bombs was similar to what the leaders of North and South Korea came up with at their own summit in April. At the time, the Koreans faced criticism for essentially kicking the issue of North Korea’s nuclear arsenal down the road to Tuesday’s Trump-Kim summit. Trump and Kim even directly referenced the so-called Panmunjom Declaration, which contained a weak commitment to denuclearization and no specifics on how to achieve it.

The formal document signing followed a series of meetings at a luxury Singapore resort.

After the signing, Trump said he expected to “meet many times” in the future with Kim and, in response to questions, said he “absolutely” would invite Kim to the White House. For his part, Kim hailed the “historic meeting” and said they “decided to leave the past behind.”

In a moment that would never happen in North Korea, reporters began yelling questions to Trump and Kim after they signed the document, including whether they had discussed the case of Otto Warmbier, the American college student who suffered brain damage while in North Korean custody and died in June 2017, days after he was returned home to Ohio.

In the run-up to the meeting, Trump had predicted the two men might strike a nuclear deal or forge a formal end to the Korean War in the course of a single meeting or over several days. But in the hours before the summit, the White House unexpectedly announced Trump would depart Singapore earlier than expected _ Tuesday evening _ raising questions about whether his aspirations for an ambitious outcome had been scaled back.

The meeting was the first between a sitting U.S. president and a North Korean leader.

Aware that the eyes of the world were on a moment many people never expected to see, Kim said many of those watching would think it was a scene from a “science fiction movie.”

After meeting privately and with aides, Trump and Kim moved into the luncheon at a long flower-bedecked table. As they entered, Trump injected some levity to the day’s extraordinary events, saying: “Getting a good picture everybody? So we look nice and handsome and thin? Perfect.”

Then they dined on beef short rib confit along with sweet and sour crispy pork.

And as they emerged from the meal for a brief stroll together, Trump appeared to delight in showing his North Korean counterpart the interior of “The Beast,” the famed U.S. presidential limousine known for its high-tech fortifications.

Critics of the summit leapt at the leaders’ handshake and the moonlight stroll Kim took Monday night along the glittering Singapore waterfront, saying it was further evidence that Trump was helping legitimize Kim on the world stage. Kim has been accused of horrific rights abuses against his people.

“It’s a huge win for Kim Jong Un, who now _ if nothing else _ has the prestige and propaganda coup of meeting one on one with the president, while armed with a nuclear deterrent,” said Michael Kovrig, a northeast Asia specialist at the International Crisis Group in Washington.

Trump responded to such commentary on Twitter, saying: “The fact that I am having a meeting is a major loss for the U.S., say the haters & losers.” But he added “our hostages” are back home and testing, research and launches have stopped.

Giving voice to the anticipation felt around the world as the meeting opened, South Korean President Moon Jae-in said Tuesday he “hardly slept” before the summit. Moon and other officials watched the live broadcast of the summit before a South Korean Cabinet meeting in his presidential office.

Photographs of the document signed by Trump and Kim indicate the leaders agreed to "work toward complete denuclearization of the Korean Peninsula" https://t.co/IY9oUHMDoQ pic.twitter.com/HimEW4pdQ3

The summit capped a dizzying few days of foreign policy activity for Trump, who shocked U.S. allies over the weekend by using a meeting in Canada of the Group of Seven industrialized economies to alienate America’s closest friends in the West. Lashing out over trade practices, Trump lobbed insults at his G-7 host, Canadian Prime Minister Justin Trudeau. Trump left that summit early and, as he flew to Singapore, tweeted that he was yanking the U.S. out of the group’s traditional closing statement.

The optimistic summit was a remarkable change in dynamics from less than a year ago, when Trump was threatening “fire and fury” against Kim, who in turn scorned the American president as a “mentally deranged U.S. dotard.” Beyond the impact on both leaders’ political fortunes, the summit could shape the fate of countless people _ the citizens of impoverished North Korea, the tens of millions living in the shadow of the North’s nuclear threat, and millions more worldwide.

Alluding to the North’s concerns that giving up its nuclear weapons could surrender its primary deterrent to forced regime change, Secretary of State Mike Pompeo told reporters that the U.S. was prepared to take action to provide North Korea with “sufficient certainty” that denuclearization “is not something that ends badly for them.”

He would not say whether that included the possibility of withdrawing U.S. troops from the Korean Peninsula, but said the U.S. was “prepared to take what will be security assurances that are different, unique, than America’s been willing to provide previously.”

The North has faced crippling diplomatic and economic sanctions as it has advanced development of its nuclear and ballistic missile programs. Pompeo held firm to Trump’s position that sanctions will remain in place until North Korea denuclearizes _ and said they would even increase if diplomatic discussions did not progress positively.