Allen Abel: At the U.S. Capitol, the president, Congress and thousands of citizens mark the end of Billy Graham's long crusade 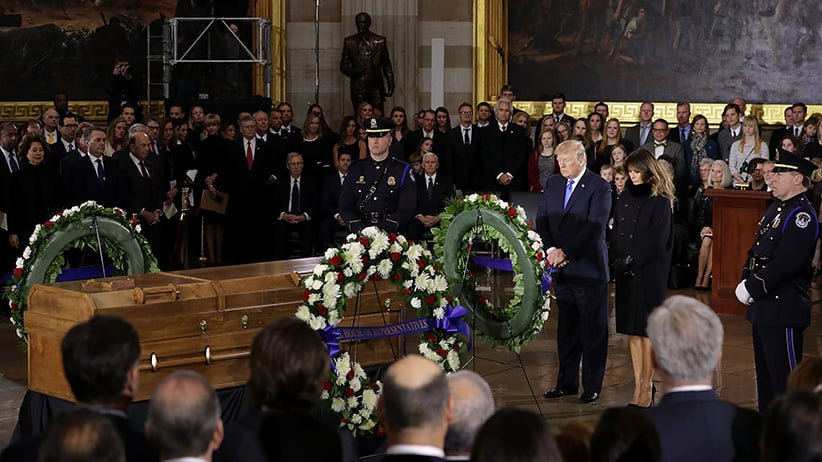 “I’m a pushover,” Woody Allen said to the Reverend Billy Graham on a television program in 1969. “If you promise me a very nice afterlife with a white robe and wings, you might convert me.”

Five decades later, a giant of the 20th century, a paramount communicator of what billions believe to be the certainty of Christian salvation, was borne through the nave of a supposedly secular cathedral, laying waste to America’s constitutional separation of church and state. Eight men of military uniform and bearing placed his coffin on the same catafalque on which Abraham Lincoln had been lain, and the long crusade of Billy Graham—who was born the week that the First World War concluded; who preached in person to more hearers than any other prelate or pontiff or president in human history—paused on its journey home.

This was the Rotunda of the U.S. Capitol as the body of the Bible-waving centenarian lay in formal honour, an honour never before extended to a holy man or woman of any formal faith: an invocation in the name of Jesus Christ in a nation that professes to hold no one creed above any other; Donald Trump recalling his own youthful attendance at one of the Reverend Graham’s crusades in a tiny tent called Yankee Stadium. Outside the dome, thousands of citizens waited in the sunshine for a glimpse of their lifelong guiding light; inside, men of temporal political power and other men of professional piety spoke words of praise for the evangelist.

(Such words as these echoed off the marble columns as if in mockery of the scurrilous mourner-in-chief in the long blue necktie, holding the hand of his black-robed bride: words such as “faithful,” “humility,” “scandal-free;” “a life of integrity;” “conduct beyond reproach.”)

“Today, we give thanks for this extraordinary life,” Donald Trump said then in his elegy. “And it’s very fitting that we do so right here in the Rotunda of the United States Capitol, where the memory of the American people is enshrined.

“Here in this room, we are reminded that America is a nation sustained by prayer. The painting to my left is of the pilgrims as they embarked for America, holding fast to the Bible and bowing their heads in prayer.

“Around us stand the statues of heroes who led the nation in prayer during the great and difficult times, from Washington to Lincoln to Eisenhower to King.”

There was more that the president could have added. Indeed, it was Billy Graham himself who paid the bail that freed the Rev. Dr. King from an Alabama jail; it was Graham who unknotted the ropes of racial segregation at his own rallies in the early 1950s. It was he who prayed with Lyndon Johnson as he prayed with Richard Nixon as he prayed in godless North Korea; he who steadfastly blew the trumpet of Gabriel while a sinful, youthful nation descended into the darkness of pot and easy sex and satanic rock and roll.

“And, today,” Donald Trump said, “in the center of this great chamber lies legendary Billy Graham, an ambassador for Christ who reminded the world of the power of prayer and the gift of God’s grace.”

Now the 45th president recalled his own pilgrimage to see the Reverend Billy Graham at the House That Ruth Built, though this was not the Biblical Ruth the Moabitess, great-grandmother of David.

“I remember that,” said Donald Trump, “because my father said to me, ‘Come on, son’ — and, by the way, he said, ‘Come on, mom. Let’s go see Billy Graham at Yankee Stadium.’ And it was something very special.”

That long-ago day, in the Sodom of New York, New York, when Donald Trump was in his early teens, the Reverend Billy Graham held up his well-worn Bible and he said this:

“Think of the thousands of people in America tonight who serve God with their lips.

“It’s a humbling thing to come to the foot of the cross and repent of your sins. But I tell you, no man shall enter the kingdom of heaven unless he comes.

“He certainly is the best in the world at what he does,” said Woody Allen in 1969.

(“I will try to convert you to agnosticism before the show is over,” Allen warned the great apostle. “MANY have tried,” said the Reverend Billy Graham.)

“Billy Graham was America’s pastor,” said Mitch McConnell in the Capitol Rotunda, though some secularists might question why America needs a national pastor at all; and, if it does, why he or she need be a Christian herdsman rather than an imam or a rabbi or a monk. “He was just a happy instrument in the hands of his Creator.”

“Here lies America’s pastor,” said Paul Ryan, the Speaker of the House. And he quoted the words of Jesus Christ from the Book of Matthew:

At the Capitol, in the throngs of the pious and the political who came to view the coffin, there was a sense that the man who lay in honour was singly deserving of this tribute; that the likes of Billy Graham would not soon appear again, and that this stirring hour should not be taken as a formal abnegation of the 1st Amendment: “Congress shall make no law respecting the establishment of a religion . . .”

“I don’t know why he shouldn’t be here,” Sen. Bob Corker, Republican of Tennessee, Donald Trump’s stinging nettle and now a lame duck who will not run for re-election this year, told a Maclean’s reporter. “We’ve had popes here, we’ve had Hare Krishnas. It will be very hard to find someone in the future with Billy Graham’s reach and with his moderate temperament.”

“Why should a Christian preacher be allowed to lie in this building?” Sen. Bill Nelson, Democrat of Florida, was asked. “No one else ever has.”

“The difference is that Billy Graham was a unifier, not a divider,” Sen. Nelson responded. “He preached a gospel of unity.”

“Why should a Christian preacher be allowed to lie in this building?” a group of women who were waiting in the queue to see the casket were asked. “No one else ever has.”

“Because there’s never been anyone else like Billy Graham,” answered Dr. Elaine Iuanow, a radiologist from Boston.

“The separation of church and state was to keep the government from controlling the church, not to keep the influence of the church out of government,” stated Lynn Jeandell, a retired elementary-school teacher from Delaware.

“I think it’s good for the country,” said Linda Maxwell, another Delaware educator. “This country was founded on Judeo-Christian principles and the founders organized the government according to those principles.”

“This should be a wake-up call that every member of Congress should conduct themselves to be held in high esteem,” noted Dr. Iuanow.

“That’s gone today. It started when they took religion out of the schools. The moral fabric of our country has been torn apart.”

“God is perfect,” America’s Pastor told Woody Allen on a television program in 1969.

“When I look at me in the mirror in the morning, it’s hard for me to believe that,” Woody Allen replied.