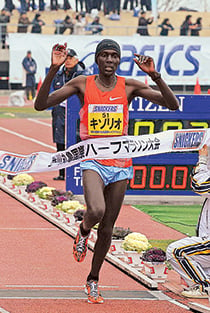 Kenya is internationally renowned for one thing: running. Ask a Kenyan youngster what they want to be when they grow up and the answer is invariably a runner. “Kenyans, they know that athletics is income, it’s an industry,” says Isaack Omulo, sports editor at the Standard, a Nairobi-based newspaper. “It’s the only area where Kenya competes effectively with, and often beats, the world’s economic and military superpowers.”

So when half-marathoner Mathew Kisorio tested positive for an anabolic steroid in 2012 and lashed out at Kenyan authorities, alleging doping was rife in the country, there was a sense of disbelief. But as of this month, the number of Kenyans who have tested positive has grown to 16, and allegations of doping among Kenyan runners has emerged as a national crisis.

The authorities were slow to act on Kisorio’s accusations, and now Kenya’s athletic credibility is being called into question as the country struggles to set up an internationally recognized drug testing centre to root out cheats. The centre, announced last year, was supposed to be operational by this month, but construction hasn’t even started. The delay is in part a result of bureaucratic foot-dragging. But there is also an ongoing turf war between the International Association of Athletics Federations (IAAF), the world governing body for track and field, and Kenyan officials who are reluctant to hand over control of testing to outsiders. “Until we can find the appropriate partner, [the centre] is still something under exploration,” says Gabriel Dollé, the IAAF’s medical and anti-doping director.

The lack of concrete action is frustrating for many Kenyans who see their country’s hard-earned international reputation suddenly at stake. Since Kipchoge “Kip” Keino won the 1,500-m in the 1968 Mexico City Olympics, Kenyans have been sweeping up medals in middle, long-distance and marathon races. Kenyan dominance has been attributed to a highly active, rural lifestyle. The majority of runners are from high-altitude regions and as such enjoy a natural advantage of greater oxygen intake over other athletes. In the past decade, Kenyan men have won eight Boston Marathons; its women, seven.

But with success comes scrutiny. Last year, the World Anti-Doping Agency singled out Kenya and Jamaica, saying it was frustrated by their lack of progress in investigating performance-enhancing drugs. An exasperated International Olympic Committee president Thomas Bach said if the countries are not adhering to the anti-doping code, they may face an Olympic ban. In response, Kenya’s secretary for sports, culture and the arts, Hassan Wario, appointed a task force to investigate doping. “Kenyans are under a microscope,” Wario told a local radio station last November. “We have to ensure that anti-doping measures are fully in place.”

Yet the task force has yet to release results of its investigation, a discouraging sign for Omulo. “Athletics Kenya and the government can do much more than just offer lip service and rhetoric,” says the journalist. For him, tangible results, including the construction of the testing centre, can’t come soon enough. “It is bad press for the country,” he says; “it’s a disaster of catastrophic proportions.”