At least 80 dead after truck slams into crowd in Nice, France 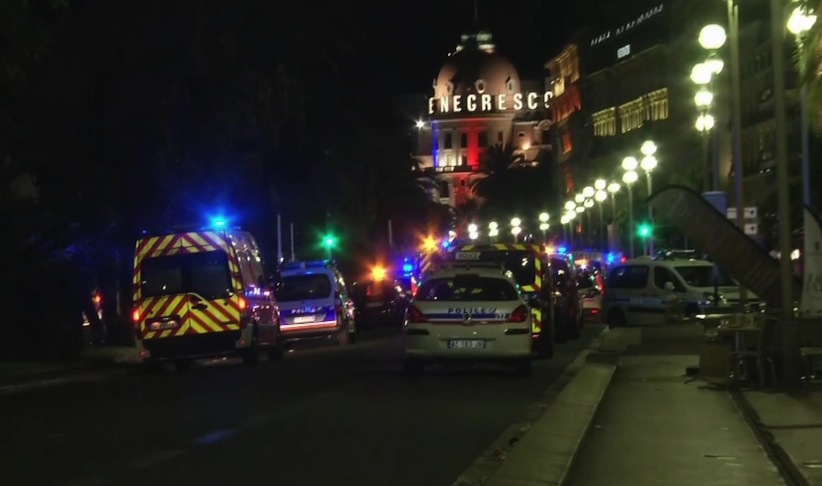 In this video grab taken Thursday July 14, 2016, ambulances and Police cars are seen after a truck drove on to the sidewalk and plowed through a crowd of revelers. (BFMTV via AP)

NICE, France — A truck loaded with weapons and hand grenades drove onto a sidewalk for more than a mile, plowing through Bastille Day revelers who’d gathered to watch fireworks in the French resort city of Nice late Thursday in what some officials and eyewitnesses called a deliberate attack that killed at least 80.

French President Francois Hollande says “the terrorist character” of the attack in Nice cannot be denied.

Hollande confirmed that 77 people, including some children, were killed when the truck drove through the crowds who had just watched a fireworks display on seafront in the city. The interior minister later updated that total to 80, adding that 18 wounded people were in critical condition.

Just hours after announcing in the traditional Bastille Day interview that the state of emergency, in place since November attacks that killed 130 in Paris, was to be removed, Hollande said it must be extended for three months. That decision will need parliamentary approval.

He also said other measures will be put in place to counter the threat.

Christian Estrosi, the president of the Provence Alpes Cote d’Azur regional council (which includes Nice) said the truck was loaded with arms and grenades. He told BFM TV that “the driver fired on the crowd, according to the police who killed him.” He added that flags would be lowered across the city on Friday, and that the city’s jazz festival, due to open on Saturday, and a Rihanna concert planned for Friday evening, have both been cancelled.

Nice prosecutor Jean-Michel Pretre described a horrific scene, with bodies strewn about along the roadway. However, he stopped short of using the word attack, while acknowledging that “it has many ingredients of an attack that allow us to think that.”

The ranking politician of the Alpes-Maritime department that includes Nice said the truck plowed into the crowd over a distance of 2 kilometres. Many of those on the ground were in shorts and other summer clothing.

Eric Ciotti said on BFM TV that police killed the driver “apparently after an exchange of gunfire.”

Sylvie Toffin, a press officer with the local prefecture, said the truck ran over people on a “long trip” down the sidewalk near Nice’s Palais de la Méditerranée, a building that fronts the beach. She called the incident “an attack.”

Wassim Bouhlel, a Nice native who spoke to the AP nearby, said that he saw a truck drive into the crowd. “There was carnage on the road,” he said. “Bodies everywhere.”

Images being broadcast across French media showed revelers running for their lives down Nice’s palm tree-lined Promenade des Anglais, the famous seaside boulevard named for the English aristocrats who proposed its construction in the 19th century.

Video footage showed men and women — one or two pushing strollers — racing to get away from the scenes. And, in what appeared to be evidence of a gun battle, photos showed a truck with at least half a dozen bullet holes punched through its windshield.

It was not immediately clear who would have been behind an attack. Meanwhile, Paris prosecutor’s office has opened a terrorism investigation over the attack. 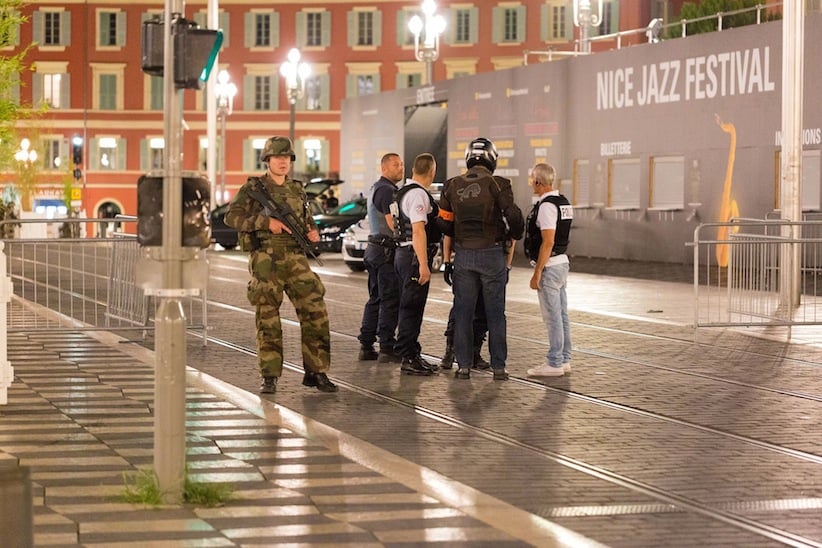 Police officers and a soldier stand by the sealed off area of an attack after a truck drove on to the sidewalk and plowed through a crowd of revelers who’d gathered to watch the fireworks in the French resort city of Nice, southern France, Friday, July 15, 2016. A spokesman for France’s Interior Ministry says there are likely to be “several dozen dead” after a truck drove into a crowd of revelers celebrating Bastille Day in the French city of Nice. (AP Photo/Ciaran Fahey)

Writing online, Nice Matin journalist Damien Allemand who was at the waterside said the fireworks display had finished and the crowd had got up to leave when they heard a noise and cries.

“A fraction of a second later, an enormous white truck came along at a crazy speed, turning the wheel to mow down the maximum number of people,” he said.

“I saw bodies flying like bowling pins along its route. Heard noises, cries that I will never forget.”

Graphic footage showed a scene of horror up and down the Promenade, with broken bodies splayed out on the asphalt, some of them piled near one another, others bleeding out onto the roadway or twisted into unnatural shapes.

“Help my mother, please!” one person yells out amid a cacophony of screaming and crying. A pink girl’s bicycle is briefly seen overturned by the side of the road.

The origin and authenticity of the footage could not immediately be verified.

Kayla Repan, of Boca Raton, Florida, was among the hundreds gathered on the promenade to watch fireworks.

“The whole city was running. I got extremely frightened and ran away from the promenade,” she said. “It was chaos. We hid in a restaurant but now we moved to a separate hotel.”

Canadian residents were among those starting to mark the safe on Facebook’s “Safety Check.”

Alex Mitchell, who lives in Kingston, Ont., wrote in an email that he and his family are staying in an apartment a few blocks from the scene.

He said they were already back from watching the fireworks when the news broke.

“What Val and I keep thinking about is all the families and children we saw tonight—and there were so many,” he said, referring to his wife. “To think that such a wonderful event could be turned into something so horrible makes us both sick. We’re just not sure what to tell our kids.”

Aman Cheema simply tweeted the hashtag “Canada” and “Hey guys me and my wife are safe, we were just two blocks away from the attack.”

World leaders have spoken out condemning the events in Nice.

President Barack Obama is condemning what he says “appears to be a horrific terrorist attack.”

“Our thoughts and prayers are with the families and other loved ones of those killed,” he said.

Noting that the attack occurred on Bastille Day, Obama praised “the extraordinary resilience and democratic values that have made France an inspiration to the entire world.”

Obama is offering French officials “any assistance that they may need to investigate this attack and bring those responsible to justice.”

Prime Minister Justin Trudeau has tweeted that Canadians are shocked by the attack.

He says Canada’s sympathy is with the victims, and he expressed Canadians’ solidarity with the French people.

The two presumptive nominees in the U.S. election also spoke about the attacks.

Republican presidential candidate Donald Trump said that if he’s elected president he would ask Congress for a declaration of war on the Islamic State.

In an interview with Fox News Channel’s “The O’Reilly Factor,” Trump said, “This is war.” He spoke after a truck carrying weapons and hand grenades drove onto a sidewalk in Nice, France, and plowed through people celebrating Bastille Day, killing at least 77 people.

Trump says to fight the Islamic State, which he calls a “cancer,” NATO should be used “for a purpose.”

In a separate interview on Fox, Democratic candidate Hillary Clinton says the U.S. needs to “stand strongly” with France and strengthen our alliances, including with NATO, to ferret out terrorism and prevent future attacks. Clinton says she would intensify efforts to put together a more effective coalition against terrorism.