Drawing a line: the political power of cartoonists in Iran

There are many ways one can land in an Iranian prison. Marching to protest a stolen election is risky. Calling for the end of Iran’s ruling theocracy is dangerous. Nikahang Kowsar was jailed for drawing a cartoon of a crocodile.

The crocodile, and the pun name he gave it, led readers to believe Kowsar was mocking a prominent cleric. He was, but he had hoped the metaphorical nature of the drawing would protect him.

It did, partially. Kowsar received death threats and was arrested. But when interrogated in court by Saeed Mortazavi—a judge who would later gain infamy for his involvement in the imprisonment and murder of Canadian photojournalist Zahra Kazemi—Kowsar could plausibly claim that he had drawn a fictional character, not unlike the Pink Panther. He was released after six days.

It is the potential ambiguity of cartoons that can make them such an attractive medium for artists and dissidents in repressive societies. They are able to push boundaries that others cannot safely touch.

This doesn’t mean drawing cartoons is safe. In 2003, Kowsar escaped Iran to Canada only days before authorities showed up at his old apartment to arrest him. Last year another Iranian cartoonist was sentenced to 25 lashes after a parliamentarian took offence to a caricature the cartoonist had drawn of him.

And yet despite the risks inherent in their art, Iranian cartoonists continue to work: challenging taboos, taking swipes at their rulers. Many have been forced to leave their homes and now live abroad. This year the International Campaign for Human Rights in Iran, a New York-based NGO, published a collection of their drawings, along with essays by Iranian activists, artists, academics and the spouses of political prisoners. Sketches of Iran: A Glimpse from the Front Lines of Human Rights was funded by a successful Kickstarter campaign that solicited financial support through a website. It’s a window into the lives of diverse Iranians—inside and outside the country—who have tried to change Iran or who love those who have, or who have simply been caught in the maw of the state’s sometimes arbitrary repression.

Throughout the book, illustrating every essay and written recollection, are cartoons, caricatures and portraits drawn by seven Iranian-born artists—four of whom later moved to Canada. One of the seven, Hadi Heidari, still lives in Iran. The messages in his drawings are subtle. Iranian expatriate artists depict abused prisoners. Heidari draws a caged bird.

“Cartoonists cannot directly criticize Iranian authorities or the situation of freedom of speech and freedom of assembly, but if you live there and you’re a smart reader, you get what the cartoon is saying. It’s very powerful,” says Omid Memarian, the collection’s editor.

“That creative process of finding the key and uncoding the message, that’s a beautiful thing. People like that it’s not very direct. My culture is a land of ambiguity and sophistication. They are not direct people. I think it has entered our genes because of the governments we’ve had for generations. It has changed our psyche and our way of thinking.”

Memarian, a journalist, was arrested and tortured in Iran in 2004. Writing for reformist newspapers, he was not an obvious target but was nonetheless swept up in a larger crackdown on journalists and bloggers.

“If even a moderate writer like me could be in trouble, it would be a lesson for others. It creates a lot of fear, and that intimidates other journalists to be careful and cautious about what they do,” he says.

Saeed Mortazavi, the prosecutor, warned Memarian not to speak out about the torture he had suffered, telling him that in Iran even important people can have accidents, and “you’re not s–t.”

Memarian did speak out. He caused a scandal in Iran, and later moved to America. He hopes this book will make people think about Iranians still inside the country—“people who are suffering on a daily basis.”

The glimpses into those lives that these drawings and articles offer can be heartbreaking and infuriating. But they are not all bleak. There is also longing and love and enormous creativity.

In one essay, Mohsen Namjoo, a singer, writes about the frustration of obtaining government permission to record and perform songs—a process the Internet and home studios now largely circumvent. “The environment and the excitement I described are truly sad,” he says. “However, we got used to both living in danger and constantly thinking of ways to liberate ourselves.”

Click on the right of the first cartoon to scroll through the gallery: 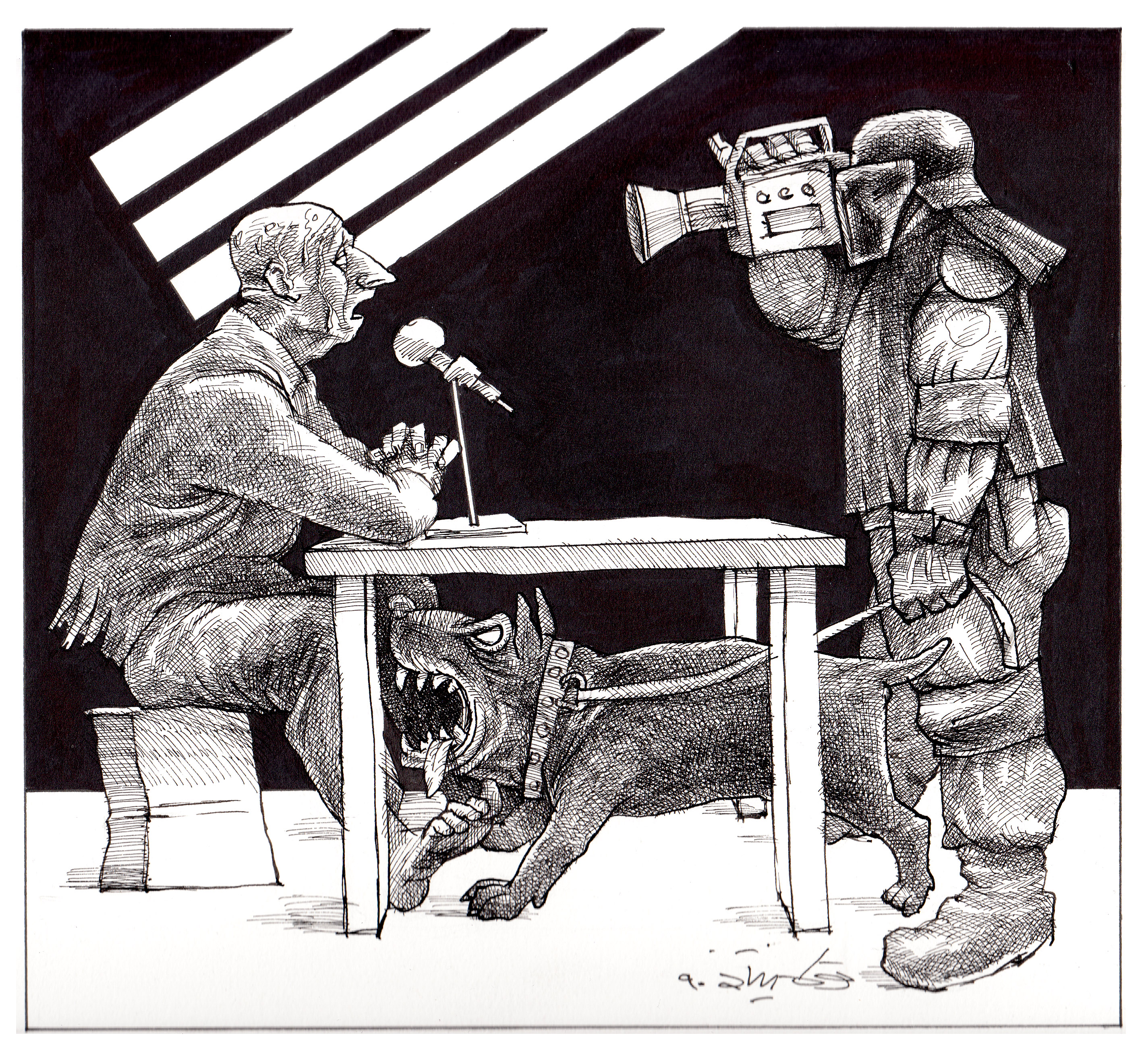