Dressing a pope from head to toe

What Francis has to look forward to, sartorially speaking 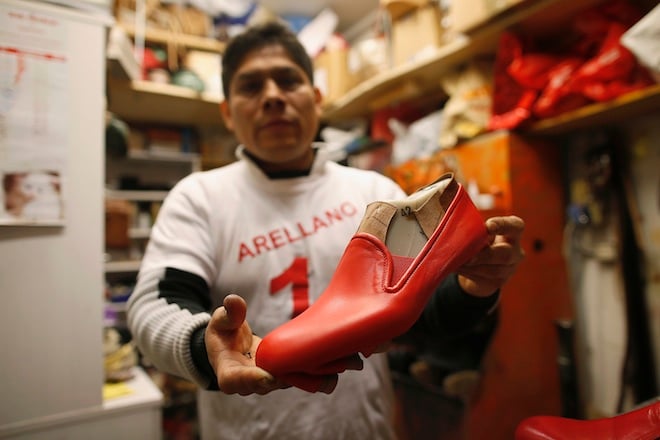 A PRIMER ON PAPAL FASHION:

Red is the colour of martydom, and thus used for papal footwear. A few years ago, the Vatican newspaper quashed the rumour that Benedict’s were made by Prada, stating, “The pope, in summary, does not wear Prada, but Christ.” Since he was a cardinal, he had frequented the tiny shop of Antonio Arellano (below)—a Peruvian-born shoemaker with a shop close to Vatican City—for handmade footwear, size 42. Arellano also did any repairs: Benedict’s shoes often wear out in the toes from kneeling in prayer. As pope emeritus, Benedict can no longer wear red, so on his first day of retirement, he switched to brown loafers purchased during a trip to Mexico. 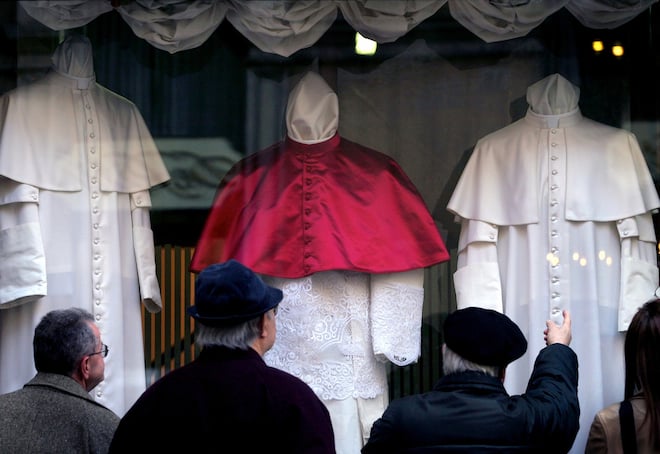 When it comes to colours, white rules for the pope. It’s reserved exclusively for popes, current and former. So the cassock, mozzetta (shoulder cape), mitre (tall pointed bishop’s hat) and even the zucchetto (skullcap) are all white. On top of the plain white cassock, the pope’s vestments will change with the liturgical calendar—so he’ll often wear purple during Lent and Advent, gold on feast days such as Easter, and red on Good Friday and Palm Sunday. In 2012, Pope Benedict XVI reintroduced the fanon, a gold-and-white striped double cape that had rarely been seen since the 1960s. He also altered the appearance of the pallium (above, middle and right), a narrow circular piece that fits over the shoulders with tails front and back. Shaped like a Y and decorated with crosses, it is worn over his other vestments. Its wool is woven in a Roman monastery and comes, in part, from two sheep consecrated by the Pope on St. Agnes day (she takes her name from the “lamb of God”) and cared for by nuns. For the new pope, three sets of clothes were at the ready—in small, medium and large—and they were quickly tailored by nuns before he was seen by the outside world. They were made by the tailors at Gammarelli, which has been in the papal fashion business for two centuries. 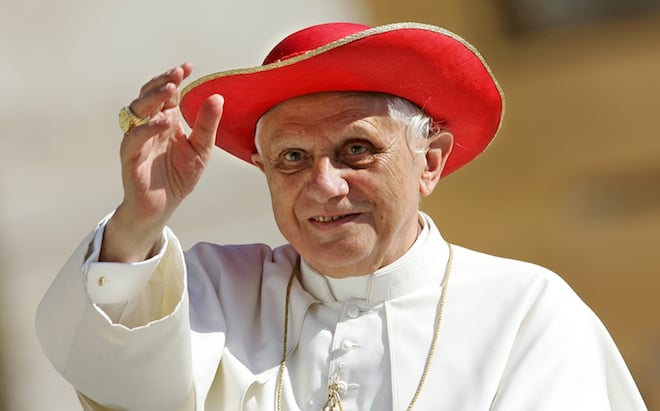 Most often the pope wears his white zucchetto (skullcap), reserving the mitre (a tall pointed bishop’s hat) for big religious events. Benedict wore hats of all shapes and sizes, including papal designs not seen for centuries. During the 2005 Christmas season, he wore a camauro, a red velvet hat trimmed with white ermine, while at a 2007 open-air mass he chose a traditional red cappello romano (a wide, flat-rimmed hat). Each pope gets a custom-made fisherman’s ring at his inauguration. Made of gold, it features Peter casting his net—the apostles were “fishers of men,” according to Mark 1:17—and is inscribed with the pope’s name in Latin. Part of his regalia, it was used to seal letters until the 19th century. While Benedict XVI usually wore his (top), most popes find the ring too cumbersome. John Paul II had a ring in the shape of a cross (middle). John XXIII (bottom) chose an ornate ring set with a stone, while others had simple bands. Upon the end of a papacy, the fisherman’s ring is destroyed.