Dubai airliner crashes in Russia killing all 62 on board 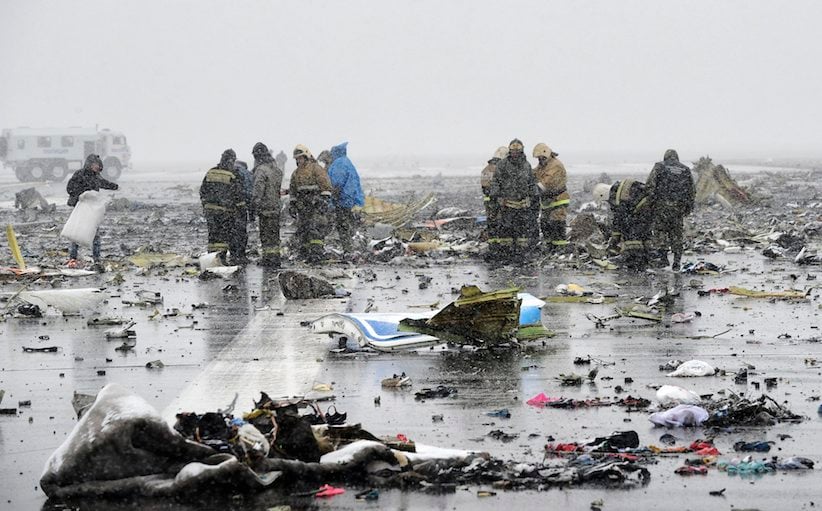 MOSCOW — A Dubai airliner with 62 people on board nosedived and exploded in a giant fireball early Saturday while trying to land in strong winds in the southern Russian city of Rostov-on-Don, killing all aboard, officials said.

Russia’s Emergencies Ministry said the Boeing 737-800 operated by FlyDubai was carrying 55 passengers, most of them Russians, and seven crew members of various nationalities. FlyDubai confirmed that there were no survivors and said four children were among those killed.

The powerful explosion pulverized the plane into fragments, but investigators quickly recovered both flight recorders. The cause of the crash wasn’t immediately known, but officials and experts pointed at a sudden gust of wind as a possible reason.

“Our primary concern is for the families of the passengers and crew who were on board. Everyone at FlyDubai is in deep shock and our hearts go out to the families and friends of those involved,” said CEO Ghaith al-Ghaith.

Vasily Golubev, the governor of the Rostov region some 950 kilometres (600 miles) south of Moscow, was quoted by Russian news agencies as telling local journalists that the plane crashed about 250 metres (800 feet) short of the runway.

Russian investigators said they were looking into adverse weather and a possible pilot error as the most likely causes of the crash.

According to the weather data reported by Russian state television, winds at ground level weren’t dangerously strong at the moment of the crash, but at an altitude of 500 metres (1,640 feet) and higher they reached a near-hurricane speed of around 30 metres per second (67 miles per hour).

Ian Petchenik, a spokesman for the flight-tracking website Flightradar24, told The Associated Press that the plane missed its approach then entered a holding pattern.

According to Flightradar24, the plane circled for about two hours before making another attempt to land. It said a Russian Aeroflot plane scheduled to land around the same time made three landing attempts but then diverted to another airport.

According to its data, the Dubai plane began climbing again after a go-around when it suddenly started to fall with vertical speed of up to 6,400 metres per minutes (21,000 feet/min0.

The closed-circuit TV footage showed the plane going down in a steep angle and exploding in a huge fireball that lit up the night sky.

Some Russian pilots and aviation experts said the steep descent appeared to indicate that the crash most probably have been caused by a gust of wind.

“It was an uncontrollable fall,” said Sergei Kruglikov, a veteran Russian pilot, said on Russian state television. He said that a sudden change in wind speed and direction could have caused the wings to abruptly lose their lifting power.

Several planes had landed in Rostov-on-Don shortly before the Dubai airliner was scheduled to touch down, but other flights later were diverted.

Another pilot, Viktor Zabolotsky, said a gust of wind probably caused the airliner to lose speed and crash as the pilot was making an attempt to go round. Pilot Vitaly Sokolovsky agreed, telling Rossiya 24 television that a sudden gust of wind could be particularly dangerous at low altitude while the pilot was throttling up the engines to make another run.

Viktor Gorbachev, the director of Russian airports association, said the airport in Rostov-on-Don has modern equipment allowing the planes to land in adverse weather, pointing at side gusts of wind as the most likely cause.

President Vladimir Putin offered his condolences to the victims’ families and top Russian Cabinet officials flew to the crash site to oversee the investigation. German Chancellor Angela Merkel sent condolences to Putin, saying she and the people of Germany felt “great dismay and sadness.”

Officials said the plane and bodies of the victims were torn into small pieces by the powerful blast, but investigators already have found the plane’s cockpit conversation recorder and another one recording parameters of the flight.

It was FlyDubai’s first crash since the budget carrier began operating in 2009. It was launched in 2008 by the government of Dubai, the Gulf commercial hub that is part of the seven-state United Arab Emirates federation. The carrier has been flying to Rostov-on-Don since 2013.

The airline shares a chairman with Dubai’s government-backed Emirates, the Middle East’s biggest airline, though the two carriers operate independently and maintain separate operations from their bases at Dubai International Airport, the region’s busiest airport.

FlyDubai’s fleet consisted of relatively young 737-800 aircraft, like the one that crashed. The airline says it operates more than 1,400 flights a week.

The airline has expanded rapidly in Russia and other parts of the former Soviet Union. Dubai is a popular tourist destination for Russian visitors, who are attracted by its beaches, shopping malls and year-round sunshine. Many Russian expatriates live and work in Dubai, a city where foreigners outnumber locals more than 4-to-1.

FlyDubai has a good safety record. In January 2015, one of its planes was struck on the fuselage by what appeared to small-arms fire shortly before it landed in Baghdad. That flight landed safely with no major injuries reported.