Missile exploded less than a meter from the cockpit, killing two pilots and the purser in an instant and breaking off the front of the plane 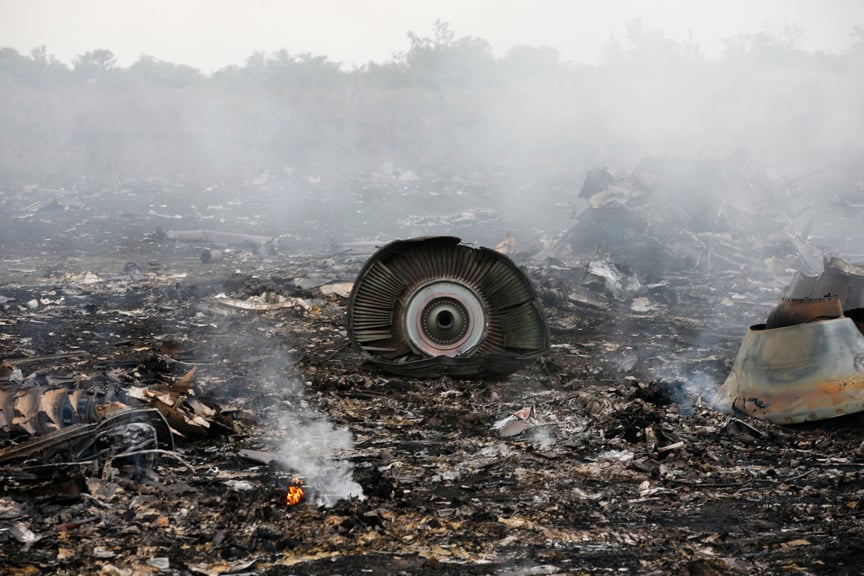 Site of a Malaysia Airlines Boeing 777 plane crash is seen near the settlement of Grabovo in the Donetsk region. (Associated Press)

GILZE-RIJEN AIR BASE, Netherlands — A missile launched from rebel-held Ukraine smashed into Malaysia Airlines Flight 17, ripping off the cockpit, Dutch investigators reported Tuesday, adding that some passengers may have remained conscious for another minute or so as the airflow tore off their clothes and objects spinning through the cabin killed people in neighbouring seats.

The investigators said in their final report that the Buk missile that downed the Boeing 777 exploded less than a meter from the cockpit, killing the two pilots and the purser inside in an instant and breaking off the front of the plane. While some of the passengers may have been conscious in the up to 90 seconds it took to hit the ground, they probably were not fully aware of what was happening amid the oxygen-starved, freezing chaos.

The tragedy that killed all 298 people aboard the flight from Amsterdam to Kuala Lumpur wouldn’t have happened if the airspace of eastern Ukraine had been closed to passenger planes as fighting raged below, the Dutch Safety Board added.

“Our investigation showed that all parties regarded the conflict in eastern part of Ukraine from a military perspective. Nobody gave any thought of a possible threat to civil aviation,” Safety Board chairman Tjibbe Joustra said.

The report did not consider who launched the missile. However, it identified an area of 320 square kilometres from which the launch must have taken place. All the territory within the area was in rebel separatist hands at the time of the crash, according to daily maps of fighting released by the Ukrainian National Security Council.

Joustra said the 15-month investigation found the warhead was that used on a Buk surface-to-air missile system. Missile fragments found in the cockpit crew’s bodies, as well as paint traces, enabled investigators to identify the Buk.

Ukraine and Western nations contend that the missile was launched by Russian-backed rebels, while Russia says if the plane was brought down by a missile, it must have been launched by Ukrainian government forces.

Joustra said Russia had been given a chance to review the conclusions in advance, and added that it was not possible to determine the type of missile or warhead with certainty.

Dutch Prime Minister Mark Rutte called on Russia to fully co-operate with the criminal investigation into the downing of the plane. He said a key priority “is now tracking down and prosecuting the perpetrators.” U.S. National Security Council spokesman Ned Price said the Dutch investigation was conducted in a professional manner and should serve as the basis for further investigation to identify those responsible for the downing of the aircraft.

However, Russian deputy foreign minister Sergei Ryabkov said the “attempt to make a biased conclusion, in essence to carry out a political order, is obvious.”

Russia in July vetoed a U.N. Security Council resolution to establish an international criminal tribunal to investigate the airliner’s destruction. Russian Ambassador Vitaly Churkin said his country “seeks justice” but that the resolution was politically motivated.

The investigators unveiled a ghostly reconstruction of the forward section of MH17. Some of the nose, cockpit and business class of the Boeing 777 were rebuilt from fragments of the aircraft recovered from the crash scene and flown to Gilze-Rijen air base in southern Netherlands.

On Tuesday in the village of Hrabove where the jet came down, Lyudmila Grigoryak — whose house was the closest to the crash site — brought red carnations to the field of dry grass where small pieces of the fuselage are still scattered.

Unlike a year and a half ago when heavy fighting was just nearby, the area is quiet and deserted. All the camouflaged rebels who were patrolling the area and manning the checkpoints are gone.

Hours before the report was released, the missile’s Russian maker presented its own report trying to clear the separatists, and Russia itself, of any involvement in the disaster.

Almaz-Antey contended that its experiments — in one of which a Buk missile was detonated near the nose of an airplane similar to a 777 — contradict the conclusion that it was a Buk missile of the kind used by the Russians. It had earlier suggested that it could have been a model of Buk that is no longer in service with the Russian military but is part of the Ukrainian military arsenal.

It said the experiments also refute claims that the missile was fired from Snizhne, a village that was under rebel control. An Associated Press reporter saw a Buk missile system in that vicinity on the same day.