Vote to leave raises likelihood of years of negotiations over trade, business and political links with EU 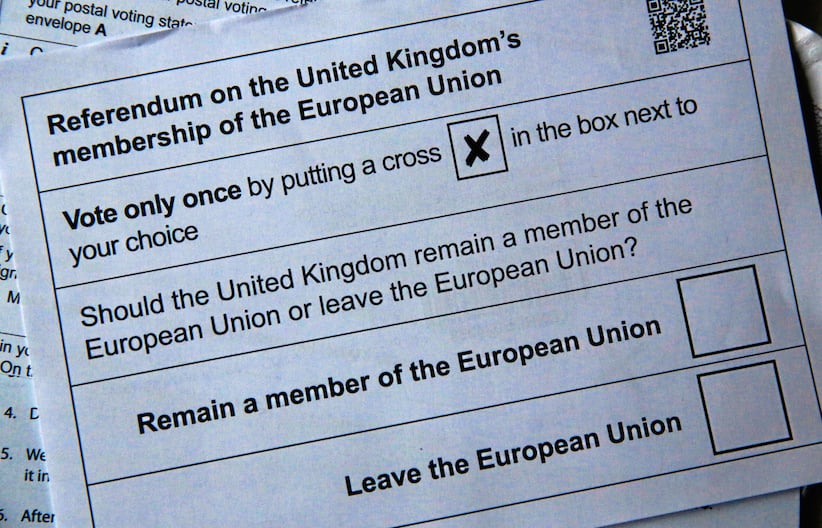 Illustration picture of postal ballot papers June 1, 2016 in London ahead of the June 23 BREXIT referendum when voters will decide whether Britain will remain in the European Union. REUTERS/Russell Boyce – RTX2F84Q

LONDON — Britain entered uncharted waters Friday after the country voted to leave the European Union, according to a projection by all main U.K. broadcasters. The decision shatters the stability of the project in continental unity forged after World War II in hopes of making future conflicts impossible.

The decision raises the likelihood of years of negotiations over trade, business and political links with what will become a 27-nation bloc. In essence the vote marks the start — rather than the end — of a process that could take decades to unwind.

The “leave” side was ahead by 51.7 per cent to 48.3 per cent with more than three-quarters of votes tally, making a “remain” win a statistical near-impossibility.

The pound suffered one of its biggest one-day falls in history, plummeting more than 10 per cent in six hours, from about $1.50 to below $1.35, on concern that severing ties with the single market will hurt the U.K. economy and undermine London’s position as a global financial centre.

But if it shocked the markets, the result delighted “leave” campaigners.

“Let June 23 go down in our history as our independence day!”

MORE: Britain’s out. Turn off the lights.

As results poured in, a picture emerged of a sharply divided nation: Strong pro-EU votes in the economic and cultural powerhouse of London and semi-autonomous Scotland were countered by sweeping anti-Establishment sentiment for an exit across the rest of England, from southern seaside towns to rust-belt former industrial powerhouses in the north.

“A lot of people’s grievances are coming out and we have got to start listening to them,” said deputy Labour Party leader John McDonnell.

The “leave” campaign had a lead over “remain” with about 70 per cent of voting districts reporting. Turnout was above 70 per cent — higher than the 66 per cent in last year’s general election.

“It may be possible that the experts are going to have egg on their face later on tonight,” he said. 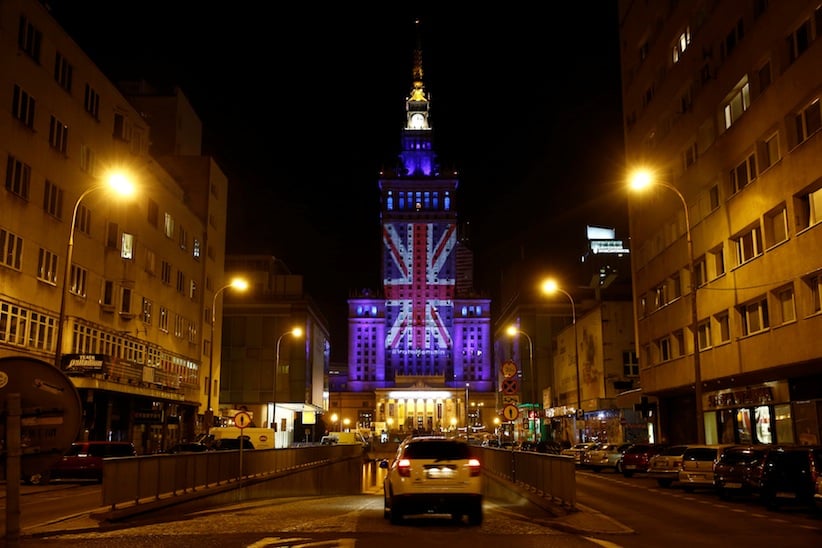 The Palace of Culture and Science is illuminated in Union Jack colours by Warsaw’s capital authorities in support of Britain staying in the EU, in Warsaw, Poland June 22, 2016. REUTERS/Kacper Pempel – RTX2HHM0

A vote to leave the EU would destabilize the 28-nation trading bloc, created from the ashes of World War II to keep the peace in Europe. A “remain” vote would nonetheless leave Britain divided and the EU scrambling to reform.

The Betfair market predicted an 81 per cent chance of Britain leaving the EU, and bookies made Brexit the favourite outcome for the first time.

The first results, from England’s working-class northeast, were a smaller-than-expected “remain’ win in Newcastle and a bigger-than-expected “leave” vote in nearby Sunderland. The “leave” side also outperformed expectations in other areas of England, though “remain” was ahead in early Scottish results.

There was better news in London, where many areas had strong “remain” majorities.

As polls closed Thursday, pollster Ipsos MORI said a survey conducted on Wednesday and Thursday suggested the “remain” side would win Britain’s EU referendum by a margin of 54 per cent to 46 per cent.

Earlier Thursday, the firm had released a poll that indicated a 52-48 victory for “remain.” That phone poll of 1,592 people had a margin of error of plus or minus three percentage points. But the firm’s chief executive, Ben Page, said continued polling on Thursday suggested a bigger swing to “remain” that gave the 54-46 result.

As polls closed, Farage set a downbeat tone for the supporters of a British exit — or Brexit — from the EU, telling Sky News television “it looks like ‘remain’ will edge it” in the referendum, sending the pound to a 2016 peak of $1.50.

But he walked back those comments later, telling reporters at a “leave” party in central London that “maybe just under half, maybe just over half of the country” had voted to pull Britain out of the EU. And by early morning he was declaring the dawn of a new era.

The high turnout had been expected to boost the “remain” vote, because “leave” supporters are thought to be more motivated. But high turnout in working-class areas that typically have lower tallies could also boost the “leave” vote.

“I think it is going to be really close,” said photographer Antony Crolla, 49, outside a London polling station.

That was certainly the case in Newcastle, a city which had been expected to deliver a resounding victory for “remain.” Instead, the pro-Europe side squeaked by with 50.7 per cent of the vote. In Sunderland, 61 per cent of voters chose “leave,” a bigger-than expected margin.

Polls had for months suggested a close battle, although the past few days have seen some indication of momentum swinging toward the “remain” side. But torrential rains, especially in the “remain” stronghold of London, raised fears of diminished turnout. London’s Fire Brigade took 550 weather-related calls as the capital was hit by heavy precipitation, thunderstorms and lightning strikes. Some polling stations were forced to close because of flooding.

MORE: So Britain voted to leave the EU. Now what?

Prime Minister David Cameron, who called the referendum and led the “remain” campaign, faces an uncertain future whichever side wins. Almost half the lawmakers from his Conservative Party backed an EU exit, and the “leave” campaign was led by potential leadership rivals, including former London Mayor Boris Johnson.

If “leave” wins, he may have no choice but to resign.

“If the prime minister loses this I don’t see how he can survive as prime minister,” said Scottish National Party lawmaker Alex Salmond. “Talk about lame ducks. This would be a duck with no legs and no stability whatsoever.”

At a referendum night party at the London School of Economics, Kevin Featherstone, the head of the European Institute, said that whichever way things went, the vote should serve as a wakeup call to politicians across the continent.

“One of the deeper headlines from tomorrow, of a narrow victory either way, is that wider Europe has got to learn the lesson about how to re-engage with ordinary publics,” he said. “We can see across Europe countries which have been … far bigger supporters of the European Union for a number of years starting to have serious doubts.”