One family’s desperate struggle for survival 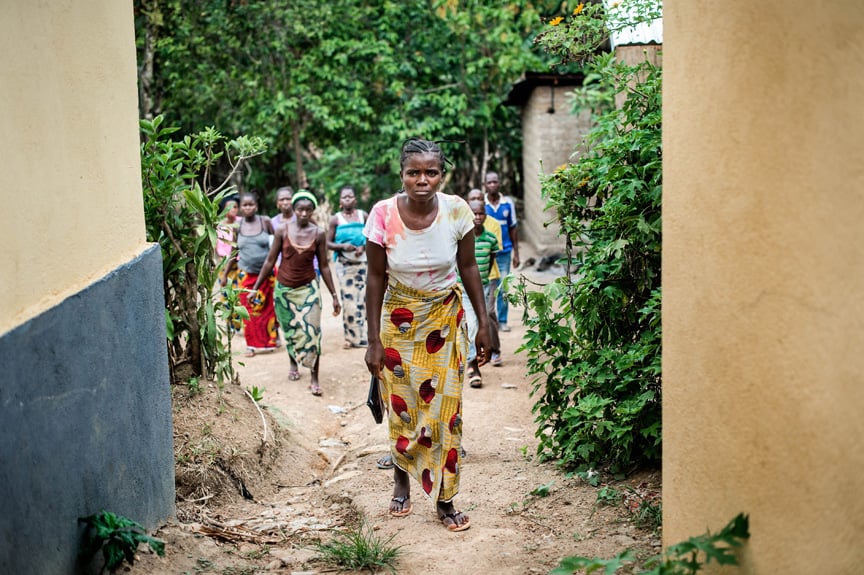 Finda Marie Kamano, 33, struggles to walk through her hometown of Guéckédougou in Guinea (Sylvain Cherkaoui/Cosmos for MSF/Redux)

On assignment to photograph the West African Ebola outbreak for Doctors Without Borders (MSF), Sylvain Cherkaoui set out to capture a typical Ebola story.

He found one in Finda Marie Kamano, a 33-year-old woman from Guéckédougou, Guinea. Her sister Fatou had called MSF in a panic, suspecting Ebola. When help arrived, Finda was vomiting and feverish. She could barely hobble 30 metres to the ambulance.

Five of their close family members had recently died of the virus. Finda had helped wash and prepare a loved one’s body—no doubt coming into direct contact with bodily fluids. That’s the only way Ebola spreads.

The next day, Cherkaoui donned protective gear, stepped into the field hospital, and snapped a picture just at the moment when health workers told Finda she had Ebola.

Though dressed “like Martians,” they rubbed her back and took their time to comfort her, Cherkaoui says. “They are trying to be human. With [personal protective equipment] it’s very difficult. It’s difficult to recognize who is talking to you.”

By his third day documenting Finda’s struggle, Cherkaoui had befriended her family members, one of whom works for MSF. They chatted as they waited to see Finda, and Cherkaoui said he felt hopeful she would recover. The previous day, she’d managed to sit up and sip a little water. But then a nurse arrived with the psychological team. Finda had slipped away during the night. Her death wasn’t gruesome, Cherkaoui says—just “so, so fast.”

Most Ebola stories end this way. The virus kills up to 90 per cent of those infected, though simple measures like IV rehydration dramatically improve the odds. The current outbreak, the worst in history, has sickened 1,603 people and killed 887. Ebola continues to spread out of control in Guinea, Sierra Leone and Liberia.

Finda’s story didn’t end with her death. The community turned on Fatou, insinuating that her sister would still be alive if she hadn’t called for help. Efforts to contain the disease are being stymied by local distrust of Westerners and widespread belief that they’re spreading the disease on purpose.

The surviving family was “exceptional,”Cherkaoui said. They even invited him to photograph Finda’s funeral, and asked him to share the pictures and help spread the word that Ebola is a real disease that can be controlled.

“It’s personal to me,” Cherkaoui says. “Ebola is killing people, because people don’t know what it is.”

FILED UNDER: Doctors Without Borders Ebola