Ebola: The cure is worse than the disease

It is not the virus you should fear. It's what comes after. 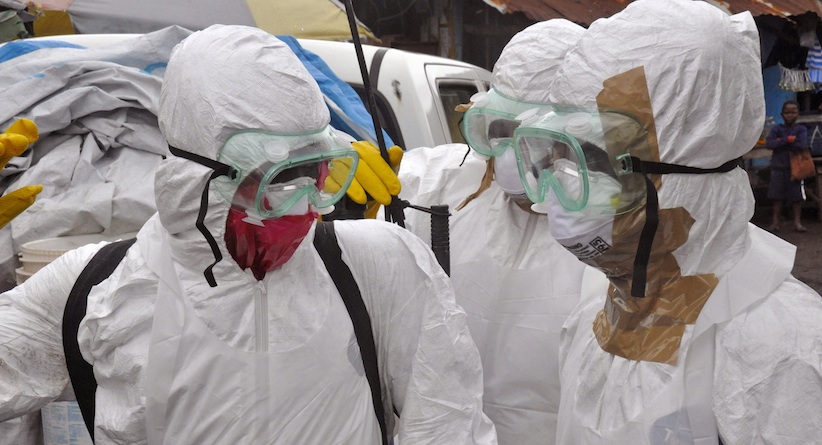 Ebola is an efficient virus. Five thousand people have contracted the disease in the past three months. Only 2,540 are still alive. That is a survival rate of less than 48 per cent.

The clean, clear charts tracking the steep growth of the outbreak camouflage the horrible, messy deaths of victims bleeding out on sidewalks in front of hospitals that are too full or too frightened to let them in. This is the worst outbreak since the disease was first identified, and experts project fatalities will increase by a factor of 10 before it is contained.

The World Health Organization is calling Ebola a health crisis “unparallelled in modern times.” The Canadian Parliament and the UN Security Council have convened emergency meetings. The U.S. is deploying 3,000 troops and other countries around the world are rushing to send money and supplies.

But, as grim as the death count sounds, it fades when compared to the 564,000 Africans who died from malaria last year. And this carnage is mostly confined to only five countries of West Africa: Guinea, Liberia, Nigeria, Senegal and Sierra Leone. It remains relatively difficult to transmit, and basic measures stop it quickly. There is almost no chance of it taking hold in Europe or North America. Massive safeguards ensure that even barely suspected cases are quickly quarantined.

This would normally be the part where I tell you, “Don’t worry; the panic is overblown.” But with Ebola, it is not the disease you should fear, it is what comes after.

In the early stages, frightened local governments closed off villages, hoping to protect the crowded cities. When this failed, states closed borders and shut down trade. Airlines soon balked at flying into West Africa, and countries like Liberia were effectively cut off from the world, preventing even the arrival of humanitarian relief workers. As hospitals became overwhelmed, they began to turn away patients. Worse still, the precious few doctors and nurses began to die at a faster rate than anyone else.

This damage to the infrastructure of West Africa has already maimed the regional economy. Last year, Liberia’s economic growth outpaced China’s, at a staggering 11 per cent. This week, they announced a recession. The IMF is warning that affected countries may soon need international bailouts.

The effects of this will reach across the Atlantic in a way that the virus cannot. Canada is the biggest foreign investor in the African mining sector. While Canadian-owned mines can protect their workforces, they cannot keep the rail yards and ports open to ship their ore abroad.

Hedge funds and institutional investors have been clamouring to enter the African market recently, potentially bringing hundreds of billions of much needed capital. With airports closed, and growth rates dropping, those deals will be delayed or will disappear entirely.

As trade and investment dry up, West Africa will face the real menace of Ebola: unemployment. Sub-Saharan Africa has the largest number of youth in the world. Forty-three per cent of the population is below the age of 15. Every year, millions of these youths enter the workforce. Creating jobs for them is the greatest concern of the political leadership. Even with the historic growth rates of the past decade, job creation was barely keeping pace with birth rates. Now, rising unemployment numbers are inevitable.

Earlier this year, before the Ebola outbreak, the European Union was already reporting a dramatic rise in illegal migrants from Africa. The social and economic disruption will result in more overcrowded boats and more bodies floating onto Italian beaches. Even though the actual number of migrants is very small, the stigma of “plague carrier” will come with them, adding fuel to the xenophobia that is already unsettling European cities like Paris and Naples.

Unemployment and social unrest may also feed the jihadists who are gaining and holding ground across the region. Nigeria, in particular, is vulnerable. If Ebola spreads into its cities and disrupts them to same degree as its neighbours to the West, it can only cripple the government’s already inadequate response to Boko Haram.

Ebola won’t kill you or anyone you know, but you won’t be able to ignore it, either. Although the virus will likely be contained to a handful of countries, its effects will be felt across the world.