Egypt: No deal yet on Gaza ceasefire, talks to continue 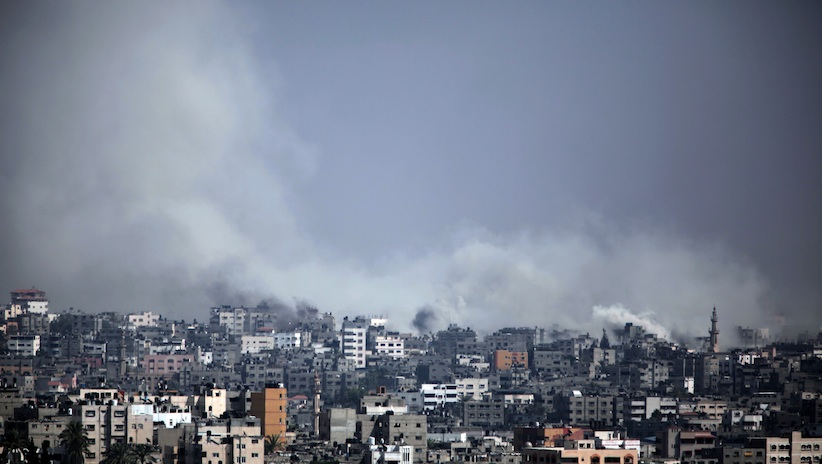 Smoke rises after an Israeli shell hit at Shijaiyah neighbourhood in Gaza City on Monday, July 21.

Egypt late Monday announced a 24-hour extension in talks between Israel and the Hamas militant group aimed at salvaging a long-term arrangement that would allow reconstruction of the Gaza Strip following a monthlong war that killed more than 2,000 people.

The announcement came just minutes before a temporary truce was set to expire at midnight, averting a resumption of the fighting that has caused devastating damage across Gaza and disrupted life throughout southern Israel.

“Palestinians and Israelis agreed on extending the cease-fire by 24 hours to continue current negotiations,” the Egyptian government said in a statement. Palestinian and Israeli officials confirmed they had accepted Egypt’s request for an extension.

Since last week, Egypt has been hosting indirect talks between Israel and Hamas aimed at ending the war.

Gaza Health Ministry official Ashraf al-Kidra said Monday the death toll from the fighting had jumped to over 2,000 Palestinians, the majority of them civilians, while U.N. officials, who often take more time to verify figures, put the number at 1,976. Thousands of homes were destroyed, and tens of thousands of people remain huddled in U.N. shelters. Israel lost 67 people, all but three of them soldiers.

Egyptian mediators shuttled between the sides Monday, but gaps appeared to remain wide. Hamas is demanding an end to a seven-year Israeli-Egyptian blockade of Gaza that has devastated the local economy. Israel wants guarantees that Hamas, which fired thousands of rockets into Israel during the fighting, will be disarmed.

In an apparent attempt to pressure Hamas, Egypt said early Monday it would co-host an international fundraising conference for Gaza, but only if a deal is reached. Israel, meanwhile, said in recent months it had arrested nearly 100 Hamas operatives in the West Bank in an alleged plot to topple Palestinian President Mahmoud Abbas.

The Gaza blockade, imposed after Hamas seized control of Gaza in 2007, remains the main stumbling block. It has greatly limited the movement of Palestinians in and out of the territory of 1.8 million people, restricted the flow of goods into Gaza and blocked virtually all exports.

Israel says the blockade is needed to prevent arms smuggling, but critics say the measures have amounted to collective punishment. Israeli Prime Minister Benjamin Netanyahu already said this week he would not allow Hamas to win a diplomatic victory at the negotiating table.

An Egyptian compromise proposal has called for an easing of the blockade to allow more movement of goods and people in and out of Gaza. Although it would not disarm Hamas, it would give Abbas, whose forces were routed by Hamas in the 2007 takeover, a foothold back in Gaza and put him in charge of border crossings and internationally backed reconstruction efforts. Larger issues, including Israel’s calls for disarmament and Hamas demands to reopen Gaza’s sea and airports, would be left for later talks.

An official in Abbas’s office said the Palestinian leader was supposed to arrive in Qatar, the base for top Hamas leaders, on Tuesday and stay until Friday.

During his stay, he is to hold meetings Tuesday with Hamas leader Khaled Mashaal and the emir of Qatar. The official said Abbas would urge Mashaal and the Qataris to support the Egyptian cease-fire efforts. The official spoke on condition of anonymity because he was not authorized to speak to the media about internal deliberations.

Robert Serry, the U.N. special co-ordinator for the Middle East peace process, urged the parties “to reach an understanding on a durable cease-fire which also addresses the underlying issues afflicting Gaza.”

“At the very least, we hope that the cease-fire will be extended and the situation will remain quiet,” he said.

Palestinian negotiators said there was no desire for a return to fighting.

“The war is behind us now,” said Ziad Nakhleh, head of the Islamic Jihad faction within the Palestinian delegation in Cairo. “We are not returning to war.”

Hamas repeatedly has said it will not give up its weapons, while Israel says it needs to maintain some degree of control over Gaza crossings to prevent the smuggling of weapons and weapons production materials into the coastal strip.

In a possible move to pressure Hamas to soften its positions, Norway’s foreign minister said Monday that his country and Egypt were planning to co-host a donor conference in Cairo for the reconstruction of Gaza. Boerge Brende said invitations would be sent out once there is an agreement in the Egypt-mediated truce talks with Israel.

Meanwhile, Israel’s Shin Bet security service said Monday it had thwarted what it described as a Hamas coup attempt in the West Bank aimed at toppling Abbas, though it offered few details. The security agency said Hamas operatives had tried to stir up an uprising that would have led to the collapse of Abbas’ Western-backed Palestinian Authority.

Shin Ben said the plot was orchestrated by a senior Hamas official, Salah Arouri, who is based in Turkey.

Abbas said he had ordered authorities to look into the reports, saying the “implications” could be “very serious.”

“This new information constitutes a real danger to the unity of the Palestinian people and its future,” Abbas said in a statement issued by the Palestinian news agency Wafa.

The latest round of fighting was precipitated by Israeli arrests of Hamas members in the West Bank following the abduction and killing of three Israeli teenagers. Shin Bet said it uncovered the coup plot due to information gleaned from the arrests.

The three teens were slain in June in the West Bank. Their killings were followed by the slaying of a Palestinian youth in Jerusalem in what was a likely revenge attack.

Also on Monday, Israeli troops demolished the homes of two militants suspected in the abduction and killing of the three Israeli teenagers and sealed up the home of a third. Minor clashes were reported during the demolition, with Palestinian youths hurling rocks and stones at armoured Israeli vehicles.