By The Associated Press November 7, 2015 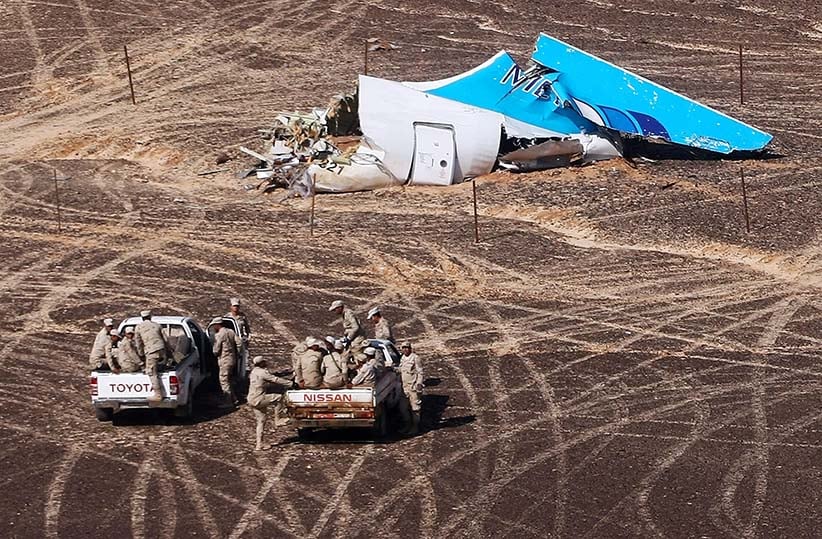 In this photo made available Monday, Nov. 2, 2015, and provided by Russian Emergency Situations Ministry, Egyptian Military on cars approach a plane’s tail at the wreckage of a passenger jet bound for St. Petersburg in Russia that crashed in Hassana, Egypt, on Sunday, Nov. 1, 2015. The Russian cargo plane on Monday brought the first bodies of Russian victims killed in a plane crash in Egypt home to St. Petersburg, a city awash in grief for its missing residents. (Maxim Grigoriev/Russian Ministry for Emergency Situations/AP)

SHARM EL-SHEIKH, Egypt — Egypt’s foreign minister complained on Saturday that Western governments had not sufficiently helped Egypt in its war on terrorism and had not shared relevant intelligence with Cairo regarding the Russian airplane that crashed last week in the Sinai, killing all 224 people onboard.

Sameh Shoukry, speaking at a press conference, said that “European countries did not give us the co-operation we are hoping for.”

Egypt’s past calls for assistance and co-ordination on terrorism issues from “the countries that are now facing the danger” had not been dealt with seriously, he said.

Shoukry also complained that Western nations that have suspended flights to Sharm el-Sheikh did not share with Cairo the relevant intelligence upon which they based their decisions. U.S. and British officials have cited intelligence reports as indicating that the Russian flight from the Sinai resort town to St. Petersburg was brought down on Oct. 31 by a bomb on board.

Shourky told reporters that Egypt “expected that the information available would be communicated to us instead of being broadcast” in the media.

The foreign minister’s comments came as Egypt launched an investigation into the staff and ground crew at the Sharm el-Sheikh airport, according to Egyptian airport and security officials.

The officials told The Associated Press on Saturday that authorities were questioning airport staff and ground crew who worked on the Russian flight and had placed some employees under surveillance. The officials all spoke on condition of anonymity because they were not authorized to speak to the media.

The crash one week ago dealt another blow to Egypt’s battered tourism sector, which is yet to fully recover from years of political turmoil. Russians comprise nearly a third of all tourists who visited Egypt in the past year.

Islamic State extremists have claimed that they brought down the Russian Metrojet flight, though they did not offer any proof.

Egyptian authorities have been trying to whip up support for a war on terror after the military overthrow of Islamist President Mohammed Morsi in 2013. A crackdown on Islamists and a series of militant attacks on security buildings and checkpoints, mainly in the restive Sinai Peninsula, have followed Morsi’s ouster _ with a Sinai-based affiliate of the Islamic State group claiming responsibility for some of the most devastating attacks.

On Friday evening, Russia suspended all flights to Egypt, joining the UK, which had specifically banned all flights to Sharm el-Sheikh. Ireland has also suspended flights to the Red Sea resort, while the Belgian, French and Dutch governments told their citizens not to travel there. Empty charter planes have been flying to Sharm el-Sheikh to bring home stranded Russian and British tourists. But these flights have banned the passengers from checking in any luggage — reflecting an apparent concern about security and luggage-screening procedures at the airport.

Maya Lomidze, acting director of the Russian Association of Tour Operators, said 46 empty Russian planes were expected to be sent to Egypt on Saturday to bring tourists home and another 47 flights were planned for Sunday. The Russian Emergencies Ministry also said it would send planes to Egypt to bring back the checked baggage of Russian tourists who were forced to leave their suitcases behind.