Maclean’s Bulldog, Oct. 11: Hillary Clinton is hit again by WikiLeaks, while Kenneth Bone (who?) becomes the hero of the election 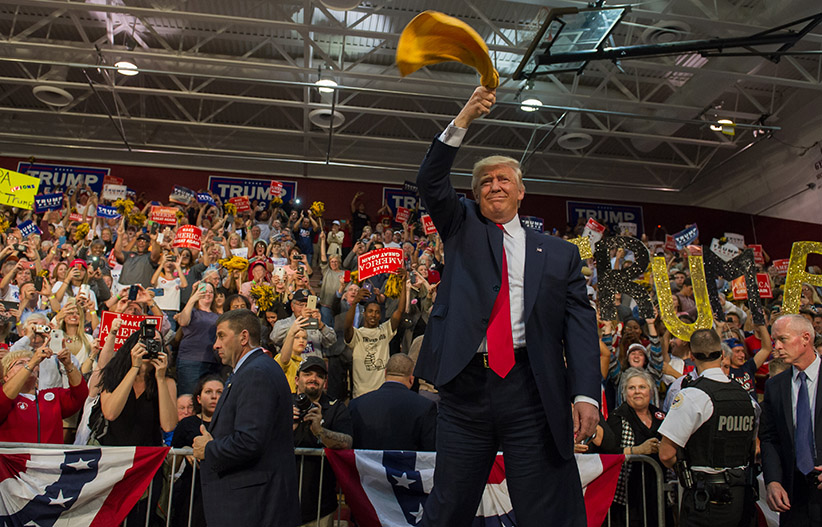 Republican candidate for President Donald J Trump waves a Terrible Towel to supporters at a rally at Ambridge Area Senior High School on October 10, 2016 in Ambridge, Pennsylvania. Ambridge, Pennsylvania, named after the American Bridge Company, a steel fabricating plant that employed 60,000 workers is a traditionally Democratic stronghold, but is shifting Republican as a shrinking tax base and lost jobs having devastating economic effects on the former industrial community. (Jeff Swensen/Getty Images)

Oct. 11, 2016: Donald Trump took his war with the Republican Party to the next level after losing the support of John McCain (among many other prominent Republicans) and hearing that House Speaker Paul Ryan will no longer be campaigning with him or defending any of his comments. Hillary Clinton, meanwhile, was hit with another series of WikiLeaks emails.

But if there is any good to come out of this election, it’s the growing legend of Kenneth Bone.

Republican House Speaker Paul Ryan won’t withdraw his endorsement of Trump, per se, but he will essentially ignore him the rest of the campaign. No public appearances together. No more defending Trump’s comments—especially the most recent ones unearthed from a 2005 Access Hollywood tape where Trump has some very crude things to say about his treatment of women.

Ryan’s focus, his team said, will be making sure Republicans don’t lose their majority in Congress. Trump’s reply? “The shackles have been taken off me.”

Despite winning the second debate in a landslide (every poll), it is hard to do well when Paul Ryan and others give zero support!

Our very weak and ineffective leader, Paul Ryan, had a bad conference call where his members went wild at his disloyalty.

It is so nice that the shackles have been taken off me and I can now fight for America the way I want to.

There’s only one month left for voters to see exactly what an “unshackled” Trump looks like.

“Lock her up” has for months been a favourite chant among the Trump faithful, who believe Clinton should be in jail for reasons stemming from her deleted email scandal to her role in the security failures during the Benghazi attack. But during Sunday’s debate, Trump said if elected he’d appoint a special prosecutor to look into Clinton, and later mentioned she should be in jail.

Since those comments at the debate, he hasn’t backed down. At a Monday night rally in Pennsylvania when the crowd went into a chant of “lock her up,” Trump replied: “Special prosecutor, here we come, right?”

Already with a lead in the polls and an audio recording that is ruining her opponent’s chances, Clinton left Sunday night’s debate with yet another win. According to a scientific poll conducted by Politico, 42 per cent of likely voters said Clinton won the debate, compared to 28 per cent who said the same of Trump. What also doesn’t bode well for Trump—who desperately needs to broaden his voter tent—eight out of 10 surveyed said the debate didn’t change their mind over who they’re voting for.

So who are they voting for? According to a new poll from The Atlantic released Tuesday morning, Clinton has an 11-point lead nationally over Trump—and that’s taking into account third-party candidates that many believe are siphoning off Clinton votes. Things are so good for Clinton at the moment that she’s talking new policy—including a proposed family tax credit of $2,000 for each kid under the age of four—instead of attacking her opponent.

Trump’s especially not happy about McCain.

The very foul mouthed Sen. John McCain begged for my support during his primary (I gave, he won), then dropped me over locker room remarks!

WikiLeaks unleashed some of the Clinton camp’s internal emails on Tuesday, with one suggesting her team was chatting with the U.S. Department of Justice about the lawsuits regarding her private email set-up.

No wonder at a recent rally, Trump said: “I love WikiLeaks.” It’s the best opposition research he gets—and perhaps the only means of opening up a path to the White House.

I hope people are looking at the disgraceful behavior of Hillary Clinton as exposed by WikiLeaks. She is unfit to run.

The return of Al Gore

Former vice-president (and very nearly president) Al Gore made his debut on the campaign trail for Clinton on Tuesday, appearing at a Miami rally to talk about—surprise, surprise—climate change. While Gore wasn’t quite popular enough to win his presidential run, he can potentially sway young voters to Clinton by doing two things: talk about policy issues that matter to younger voters (climate change) and then perhaps dissuade them against voting for a third-party candidate. After all, if it weren’t for about 100,000 Floridans embracing Ralph Nader 16 years ago, perhaps there never would have been a George W. Bush presidency. Gore’s mere presence is a constant reminder of that.

Trump’s newest political attack ad directly targets Clinton’s stamina. It opens with talk about the many dangers in the world—such as ISIS and other war zones— before it transitions to video of one of Clinton’s previous coughing fits and the time she nearly collapsed after leaving a 9/11 commemoration event.

Releasing taxes under audit (not Trump)

Warren Buffett clearly doesn’t want to be mentioned in the same sentence as “Trump” and “tax returns.” So when the Republican nominee suggested at the debate that Clinton supporters like Buffett are taking “massive” deductions to avoid paying taxes like Trump allegedly did, Buffett simply offered up the details of his 2015 tax return. He offset a total of $5.5 million in deductions (more than half of that from charitable donations) and paid $.18 million in federal income tax. That’s not much, relative to his wealth, but Buffett has long claimed the superwealthy like himself should pay more. And, in a final parting shot at Trump, Buffett said that—like Trump—he too is currently under audit by the IRS. Unlike Trump, however, Buffett said: “I have no problem in releasing my tax information while under audit.”

Before the weekend, Ken Bone was just your average undecided American voter. But after getting to ask a question regarding energy policy at the recent presidential town hall debate, Bone quietly became Internet-famous. How? Was it the red sweater? Perhaps it was the moustache? Or the name “Ken Bone”? Regardless, using a disposable camera on stage to take a picture afterwards definitely helped.

Ken Bone taking a picture with his disposable camera so it lasts forever. Legend https://t.co/VU3ChYEaen

So of course Jimmy Kimmel wanted to interview him.