Maclean’s Bulldog, Oct. 14: Trump is losing support. So too is Ken Bone. Our daily roundup from the U.S. election campaign trail. 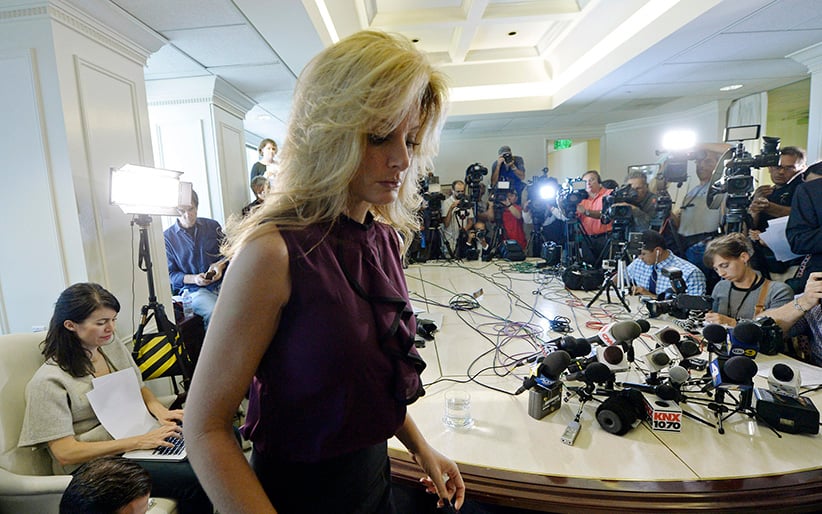 Summer Zervos, a former contestant on the TV show The Apprentice, leaves a news conference after speaking about allegations of sexual misconduct against Donald Trump in Los Angeles, California, U.S. October 14, 2016. (Kevork Djansezian/Reuters)

Oct. 14, 2016: Donald Trump continued to defend himself amid more allegations of sexual assault from multiple women, including one who appeared as a contestant on The Apprentice. Hillary Clinton, already soaring in the polls, got an endorsement from a major Florida newspaper.

Meanwhile, Ken Bone—America’s favorite red-sweater-wearing undecided voter—had his 15 minutes of fame come to an abrupt end after a Reddit ‘Ask Me Anything.’

Trump once bragged to Billy Bush that—because of his fame—he could grab a women without asking; on Friday a former aspiring model came forward to say  that in the early 1990s at a crowded Manhattan nightclub, Trump’s “fingers slid under her miniskirt, moved up her inner thigh, and touched her vagina through her underwear.” She said she shoved his hand away and left where she had been sitting.

Gloria Allred, a high-profile discrimination attorney, also held a press conference with another accuser—a former Apprentice contestant—who spoke out for the first time about Trump. She alleged Trump kissed her aggressively, put his hand on her breast and thrust his genitals as she tried to push him away. Unlike the previous allegations, which claim Trump’s unwanted advances happened decades ago, this one is said to have taken place in 2007.

Trump has continued to stress that all the accusations against him are complete fabrications, and he questions the timing of them coming out a month away from the election. He also mocked one accuser, saying at a rally “she would not be my first choice.”

Meanwhile a former Sports Illustrated swimsuit model came forward to the Daily Mail about a 1993 event hosted by Vanity Fair where she had a seat next to Trump—but asked to be moved midway through the evening because he wouldn’t stop talking about the breasts of the women at the event.

A closer glimpse at The Apprentice, unedited

It’s very possible Americans will never see the hot microphone footage of Trump on-set during his reality show The Apprentice­­­—non-disclosure contracts with a $5-million “leak fee” are a major deterrent—but former employees are shedding a bit of light on what might have been picked up. Speaking with The Daily Beast, three former staffers said Trump repeatedly called Marlee Matlin—the only deaf person to ever win an Oscar for Best Actress—“retarded” and mocked her voice.

Does this kind of action sound familiar? The former Apprentice staffer said it was very much akin to when Trump openly mocked a New York Times reporter for his disability earlier in his presidential campaigning.

Trump continues to be left out of newspaper presidential endorsements. as both the Idaho Statesman and Miami Herald endorsed Clinton. The Idaho paper acknowledged its readership may not like seeing them endorse a Democrat in the very conservative state—not to mention one where the Democratic caucus overwhelming chose Bernie Sanders over Clinton—but wrote: “We live in the real world, with real problems that need real solutions. We need someone with pragmatic approaches that include patience and compassion. We need Hillary Clinton to be the next president.”

But in Florida—a virtual must-win for Trump—the major Miami paper also endorsed Clinton, writing: “The sum of all her flaws amounts to little compared to Donald Trump’s total lack of fitness for the presidency.”

Some actual policy was discussed on the campaign trail today. Trump told a group of Ohio college and high school students how he would cap student loan repayment at 12.5 per cent of a borrower’s income, and perhaps would even propose forgiving all student debt after 15 years for those who don’t miss payments. The details of how this new policy would get paid for weren’t laid out, but Trump was adamant he’d find a way to work something out. “It’ll be a negotiation,” Trump said. One student exclaimed it’d be the “Art of the Deal.”

Trump’s told his supporters that he has evidence that proves the media are out to get him. The proof? Trump’s defence on Friday was that one of the world’s richest men, Mexican billionaire Carlos Slim—who owns a significant chunk of shares in the New York Times and a Clinton Foundation donor—is colluding with the Clinton camp to fabricate stories.

The Times put out a statement explaining that Slim had never attempted to influence their reporting. And, according to CNBC, a spokesperson for Slim said of Trump: “He doesn’t know [Trump]. He’s never met him in any way. He doesn’t know anything about his personal life and, to be honest, he doesn’t care about his personal life. We never get involved in politics in Mexico, much less in the United States.”

The rise and fall of Ken Bone

Thanks in large part to his name, bright red sweater and a question about energy policy at the recent presidential town hall debate, Ken Bone quickly became a star of the 2016 campaign. He appeared on Jimmy Kimmel Live, went from seven Twitter followers to 243,000, and got his own T-shirt.

America, prepare to enter the #bonezone. My official shirt is available for 1 week. Get it at https://t.co/WKSP0H9p9i pic.twitter.com/ts7K0K5WUv

But his 15 minutes of fame was cut off short when he conducted a Reddit “Ask Me Anything”  in which he told the world his Reddit pseudonym and everyone could take a glance into all of his previous comments. Some of his the worst offences—made during a time when his username was more anonymous—included admitting forging car insurance documents to get a job, stating that the killing of teenager Trayvon Martin was “justified” and talking about enjoying looking at the hacked nude photos of Jennifer Lawrence. Prepare to leave the Bone Zone.