Election Daily: The FBI cleared Clinton, but is the damage done? 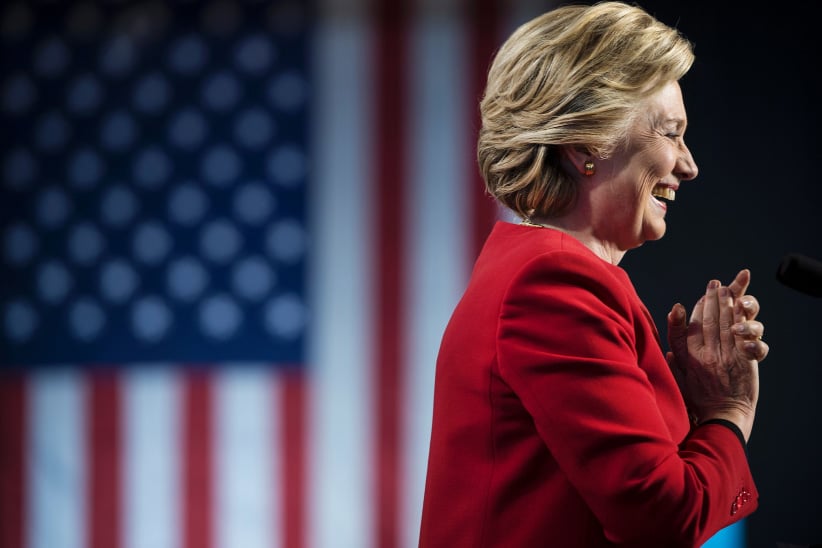 Nov 7, 2016: The polls are done—expect the one that matters: Election Day. Hillary Clinton seems poised to win the national popular vote, but to say that she’ll win Florida, North Carolina, or the right combination of states to put her over the 270 electoral vote threshold is still far from certain. Clinton’s team will be happy that the reopened FBI probe into her emails is over—there’s no case—but the damage may be done.

Donald Trump used a five-stop final day to reach out to swing-state voters in Florida, North Carolina and New Hampshire. And in either a sign of confidence (or a sense of desperation), the Republican nominee added two more stops in what were thought to be Democrat strongholds in Pennsylvania and Michigan. Along the way, he made fun of hip-hop/rap music and called out Jay-Z and Beyoncé.

Here’s our daily U.S. election Bulldog, a regular round-up of what you need to know about this day on the campaign trail. And get ready for Maclean’s election coverage on Tuesday—including a live Skittles map, a live-blog, post-election analysis, and much more. Subscribe to our Facebook page to be notified when we go live!

Finally, some good news for Clinton: she’s fine in the FBI’s books. But is it too late to get that message to undecided American voters?

The FBI announced on Sunday that—just as it had concluded months ago—there is no case against Clinton with regard to her private email server scandal. FBI director James Comey said as much in a letter to House and Senate committee leaders, putting an end to speculation that newly discovered emails on a laptop belonging to disgraced former Congressman Anthony Weiner (the estranged husband of a Clinton aide) contained anything potentially criminal.

“Since my letter, the FBI investigative team has been working around the clock to process and review a large volume of emails from a device obtained in connection with an unrelated criminal investigation,” Comey wrote. “During that process we reviewed all of the communications that were to or from Hillary Clinton while she was Secretary of State…I am very grateful to the professionals at the FBI for doing an extraordinary amount of high-quality work in a short-period of time.”

“We are grateful that this matter is resolved now,” Clinton’s campaign manager Robbie Mook told CBS.”I don’t know why they couldn’t have resolved this behind the scenes and avoided all of this ruckus.”

On the eve of Election Day, many polls suggest Clinton has a small—but by no means safe—lead that make her a favourite to become the next president of the United States. Nationwide polling from Fox News, Washington Post tracking and CBS News suggest Clinton has a four-point lead across the country in a four-way race including the two major third-party candidates. Other polls, like those from NBC News and Monmouth University, see her lead as being more substantial—six points—while a few such as Investor’s Business Daily tracking and the L.A. Times suggest Trump has a narrow lead.

But what truly matters are state polls and winning enough of them to get past the target 270 electoral college votes. In the battleground states that will likely choose the next president: Trump seems to have a strong foothold in Ohio (up seven points in an Emerson College poll); Clinton has a very narrow lead in Florida; and North Carolina is pretty close to a coin flip.

But the best poll of all for Clinton isn’t the one that gives her a six-point edge in Virginia or a five-point lead in Michigan—two states she’s always expected to win—but it’s a New Hampshire poll that saw her in an 11-point lead among likely voters. Why does that matter so much? If Trump wins Florida, North Carolina and Nevada, while Clinton wins Pennsylvania, Wisconsin and Colorado (as she’s expected to), then tiny New Hampshire and its four electoral college votes could be the deciding state.

The final poll will be taken tomorrow and it’s the only one that really matters: when people actually cast a ballot.

Trump goes off script for a brief moment at a rally on Monday and what does he do? He not only mocks hip-hop music but at the same time criticizes living legends Jay Z and Beyoncé who performed for Clinton at a rally over the weekend.

“As they were… singing? Singing, right? Talking? Was it singing or talking, I don’t know. But the language was so bad that many of the people left,” Trump claimed. “Isn’t it amazing that when Jay Z and Beyoncé use the filthy language that they use in the songs, using words that if I ever said those words it would be the reinstitution of the electric chair…and yet with me ‘he’s very lewd.’ ”

Trump: "Clinton got Jay Z and Beyoncé, the language they use is so bad. As they were singing – was it singing or talking – everybody left." pic.twitter.com/KXkx3fFHP9

The word in question that Trump criticized Jay Z and Beyoncé so strongly for using was the n-word. And yet, Trump wasn’t so critical of Don King when the boxing promoter used it during an introduction at an Ohio event to support Trump in September. Back then, Trump simply smirked.

The fireworks display that the Clinton camp had prepared for Tuesday night should she win the election is off. For weeks, there were plans for a celebratory two-minute show over the Hudson River in New York, and while they do have a fireworks permit, New York Police told reporters on Monday, “at this point we believe the fireworks is cancelled,” a spokesperson said.

Where loyalty gets you

While many Republicans have been rather on-and-off with their support of Trump—especially in the aftermath of the 2005 tape of Trump boasting about groping women without consent—the few who stood by his side could see themselves in some pretty high profile roles should Trump win on Tuesday.

And if Trump wins, might we suggest his campaign manager, Kellyanne Conway get a long vacation.

Apparently Trump still controls access to his own Twitter account, though one might be hard pressed to believe it based on the run-of-the-mill “Thank you [insert state here]” tweets or messages about upcoming rallies. For a candidate who has used Twitter to get his message out to the public unfiltered—sometimes even at 3 a.m.—the last few days of social media activity have been rather subdued. A Trump aide refuted a New York Times story suggesting that Trump’s Twitter privileges were taken away in hope of keeping him on message. “No one is taking away his Twitter,” Boris Epshteyn told USA Today. “He’s his own man.”

But he’s also a man who told a reporter, “I’m on message,” and jokingly saying aloud at campaign rallies: “Stay on point, Donald.”

And it’s enough for Obama to send out one last poke at Trump’s expense at a rally in Michigan, where the President said: “If your closest advisers don’t trust you to tweet then how can we trust him with the nuclear codes?”

Recommended reading: If battleground states like Ohio, Florida and North Carolina all fall in Trump’s favour—and should he pull of a minor upset in New Hampshire—Trump may still fall short by failing to win Nevada.

Polls suggest he has a modest lead in the state, maybe one or two points. And yet, the turnout of Democrats to early voting booths—notably Hispanics—has political analyst Jon Ralston saying the vote lead is likely insurmountable for Trump at this point.  “A Buffalo Bills Super Bowl championship is more likely,” he said.

Read Ralston’s piece in Politico about “How the Harry Reid Machine may have killed Trump’s Chances.”