Maclean’s Bulldog, Oct. 24: Clinton teams up with a "nasty woman" and Trump gets his first major newspaper endorsement 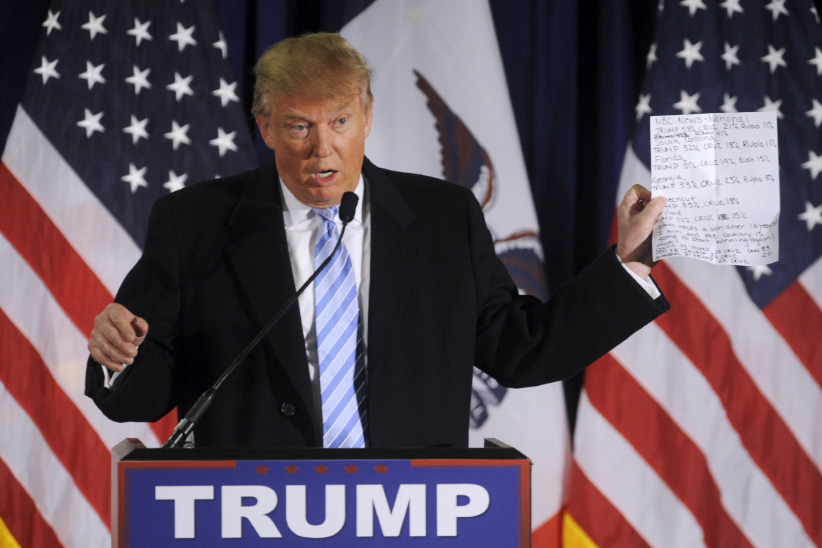 Oct. 24, 2016: Donald Trump is losing in pretty much every national poll and falling behind in most of the key battleground states. Even Texas is no longer a sure thing for the Republicans. And so Trump has a new message for his supporters: don’t believe the polls (except for the few that show him in the lead, one must presume). Meanwhile, Hillary Clinton teamed up with another “nasty woman” in New Hampshire.

If you believe the polls are accurate, Clinton is almost certainly going to become the 45th president of the United States. All the major national polls have Clinton in the lead, some by as high as 12 points; the New York Times Upshot polling analysis says the odds of Clinton winning are about 92 per cent; and RealClearPolitics just changed the status of Texas—usually a Republican stronghold in every election—to a “toss up” for who’s going to win on election night.

So what’s Trump’s response to the polling numbers seemingly stacked against him? He says that Democrats are making up fake polls designed to discourage his supporters from showing up at the voting booth on Nov. 8.

Major story that the Dems are making up phony polls in order to suppress the the Trump . We are going to WIN!

The prospect of Trump winning is not altogether impossible. In fact, one national poll from Rasmussen gives Trump a two-point edge over Clinton. Trump’s hope is that this poll is representative of the nation, while the many, many others are mistaken.

Clinton and Elizabeth Warren, the popular liberal senator from Massachusetts, visited New Hampshire on Monday. Warren’s speech dug into Trump’s previous debate remarks, where he dismissed Clinton as a “nasty woman,” by saying, “Nasty women vote… We nasty women are going to march our nasty feet to cast our nasty votes to get [Trump] out of our lives forever.”

The rally in New Hampshire is strategic for two reasons. First, it can help Clinton solidify support in the state and its four electoral college votes. Second, the Clinton team is also making a play to oust the incumbent Republican senator, Kelly Ayotte, whose re-election bid has become increasingly competitive since she said Trump was “absolutely” a role model for kids—a remark she quickly said was a mistake.

A long link from Clinton to the FBI

Clinton’s never-ending email scandal—and the subsequent FBI investigation—found new life on Monday when it was reported that the political action committee overseen by a close Clinton ally, Virginia Gov. Terry McAuliffe, donated almost $500,000 to the Senate campaign of Dr. Jill McCabe. What’s the problem? McCabe’s husband is an FBI official who later played a role overseeing the investigation into Clinton’s emails.

A spokesperson for McAuliffe told the Wall Street Journal that he supported McCabe because he thought she’d be a good senator (though she ultimately lost in her bid), and McCabe said that her husband had no role in her campaign outside of being a supportive husband.

Trump’s team has jumped on the story, calling it “either outright negligent behaviour by the FBI or a level of corruption that is beyond belief.”

Trump earned his first endorsement from a major newspaper over the weekend, when the Las Vegas Review-Journal backed him to become president.

“History tells us that agents for reform often generate fear and alarm among those intent on preserving their cushy sinecures. It’s hardly a shock, then, that the 2016 campaign has produced a barrage of unceasing vitriol directed toward Mr. Trump,” the editorial wrote, listing his stance on lowering taxes, protection of the Second Amendment, and the importance of selecting the next members of the Supreme Court. “Mr. Trump represents neither the danger his critics claim nor the magic elixir many of his supporters crave. But he promises to be a source of disruption and discomfort to the privileged, back-scratching political elites for whom the nation’s strength and solvency have become subservient to power’s pursuit and preservation.”

An 11th woman stepped forward with an accusation of sexually inappropriate conduct against Trump. Jessica Drake, an adult film star, held a press conference over the weekend with high-profile attorney Gloria Allred. Drake claimed that, 10 years ago at a golf tournament, Trump grabbed and kissed her and her friends in his suite, and when she refused, was offered $10,000—though it was never said outright what the money would be for. (Drake says she declined the cash.)

What party is Hillary Clinton with again?

Clinton may be up in the polls, but that doesn’t mean all Americans know which party she’s running for in the election. According to data from Google Trends, the top trending question about Clinton over the last day was, “Is Hillary Republican?”

Top trending questions on @HillaryClinton in the past day. More data at https://t.co/WNyWeX22Rt pic.twitter.com/EsrjFNysZ8

Saturday Night Live—the late night sketch comedy Trump dubbed “boring and unfunny” and trying to do a “hit job” on him—might have shown the most affectionate view of a stereotypical Trump supporter when last weekend’s host, Tom Hanks, played a Trump supporter competing on Black Jeopardy!.