Elmo vs. the mayor of New York 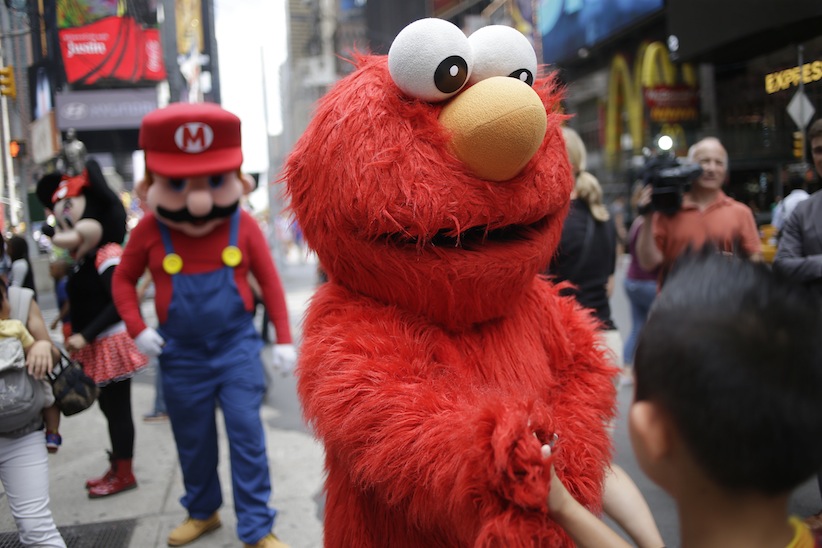 New York City is considering a crackdown on more than a few characters in Times Square.

The city wants to rein in a summertime spike in badly behaving characters, such as the Spider-Man accused of punching a police officer recently.

“This has gone too far,” a frustrated Mayor Bill de Blasio said this week. “It’s time to take some real steps to regulate this reality.”

But that could be easier said than done. Legal experts say proposals for a city law to possibly require licenses and background checks could violate free-speech rights.

At issue is whether the characters can be considered street performers protected by the First Amendment of the U.S. Constitution or are engaged in commercial activity subject to regulation. It comes down to whether the characters merely hope for tips or demand money. Some tourists have complained about being harassed for payment.

“If you can prove that they are there to seek money, not simply conveying a message … they are subject to greater regulation,” said University of California constitutional law professor Jesse Choper.

In about the past year, a Cookie Monster was accused of shoving a 2-year-old and an Elmo was heard berating tourists with anti-Semitic slurs.

There also have been recent reports of a brawl between two Statue of Liberty impersonators, and a man dressed as Woody from “Toy Story” groping women.

Last Saturday, a man dressed as Spider-Man was arrested on charges he slugged a police officer who tried to intervene during a dispute with a woman who offered him $1. Authorities say the crime-fighting hero told the woman he only accepts $5, $10 or $20.

George Washington University constitutional law professor Jonathan Turley said any regulations must be written carefully to avoid arbitrary enforcement. Singling out just those who wear costumes, for example, could be problematic.

“When politicians call for regulating someone in a costume, it’s clearly inane,” he said. “You have people on Wall Street who violate the law, and we don’t subject people in Armani suits to special regulations.”

City Councilman Dan Garodnick, a Manhattan Democrat who is drafting legislation, said the details are still being worked out. “We’re trying to balance First Amendment rights of individuals with the need to protect people from what has become garden-variety harassment.”

In Los Angeles, costumed characters have brawled outside the famed TCL Chinese Theatre on Hollywood Boulevard, vying for sidewalk turf while expecting as much as $20 in tips from visitors.

New York’s regulation push is backed by the non-profit Times Square Alliance, which on a recent night counted no less than 76 costumed characters prowling the square. Another local group, the Broadway League, blames the aggressive characters for a downturn in theatre business.

“They’re making it a commercial enterprise, they’re selling a service and asking for money,” said the league’s Charlotte St. Martin.

Another issue involves copyrights, since most of the costume wearers are not authorized by the characters’ owners, including Disney and Sesame Street.

On a sunny afternoon, Times Square was filled with about two dozen characters, including multiple furry Elmos, a Minnie Mouse, a Hello Kitty and more than one copper-green-skinned Statue of Liberty. At least two characters, — a Minion from “Despicable Me” and one of the Elmos — said they purchased their knockoff costumes, made in Peru, for about $300.

Speaking in Spanish through their masks, several people acknowledged they are living in the U.S. illegally and said they rely on Times Square to feed their families. City officials acknowledged that some of the characters are in the country without legal permission but said they don’t know how many.

Pablo Fuentes, 40, an unemployed construction worker with four children from Paterson, New Jersey, said he works five days a week as a Minion, earning about $55 for each six-hour shift.

“A licence would be good for everybody, for the customer, for us, for you,” he said. “This is a job, and we’re not doing something wrong. Everybody needs a job.”