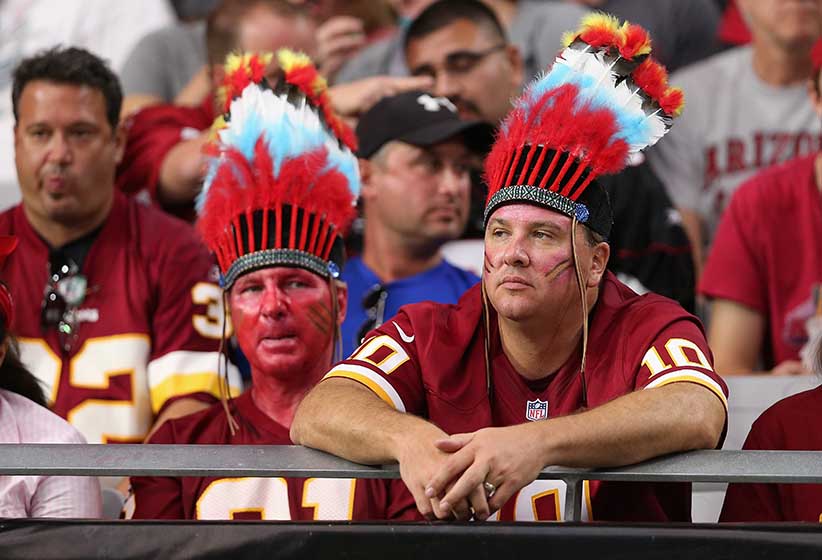 Listen to Emma Teitel read her column, or subscribe to Maclean’s Voices (or our other podcasts) on iTunes or Stitcher for on-the-go listening:

A few weeks ago, I was at a house party, dancing with some of my girlfriends, when a very drunk male acquaintance groped my rear end. When I objected, loudly, one of the drunken groper’s friends—a soft-spoken, peaceable bro (think Benvolio with a beer belly) stepped in front of me. “Relax,” he said. “It was meant as a compliment.” Well, I explained, it certainly wasn’t perceived as one, which means, logically, it wasn’t one. That’s the thing about compliments: Their success isn’t measured by intentions, but by results. If the person on the receiving end of your flattery isn’t flattered, you have complimented no one. This is a truth inebriated men at parties have failed to grasp for millennia. It is also a truth that is lost, of late, on another clueless demographic: fans and owners of the Washington Redskins, an NFL franchise whose name is quite literally an ethnic slur used to disparage Native Americans.

The team, established 83 years ago, has faced increased pressure in recent years from Native American groups to change its name—pressure that team owners have either ignored or dismissed, citing the franchise’s legacy of supposed “respect” for Native Americans (a.k.a. “Relax, we mean it as a compliment”). This month, however, a U.S. federal judge ordered the cancellation of the franchise’s trademark registration—upholding a 2014 decision by the Trademark Trial and Appeal Board of the United States Patent and Trademark Office that declared the Redskins name officially “disparaging to Native Americans.” The ruling doesn’t mean the team is banned from using its name, only that it has lost the legal protections granted by federal trademark legislation.

But team owners, convinced of their moral superiority, intend to appeal the decision right away. In fact, they maintain, in the words of team president Bruce Allen, “the facts and the law” are on the side of their franchise, which “has proudly used the name Redskins for more than 80 years.” Team owner Dan Snyder, employing the logic of the party-groping apologist above, argues that the Redskins name is complimentary to Native Americans. “The Washington Redskins fan base represents honour, represents respect, represents pride,” he said last year. To illustrate this point, Snyder has pointed repeatedly to Native Americans who are linked, positively, to the team’s history: The franchise was named after William Henry “Lone Star” Dietz, its ﬁrst head coach, who claimed he was of Native American descent. (Some contest his claim.) And Walter “Blackie” Wetzel, a former president of the National Congress of American Indians, helped to develop the Redskins logo.

Snyder’s historical justiﬁcation for the team’s name, applied to the groping scenario described above, amounts to this: “You may not be happy that I groped your rear end, but I assure you that my grope was a compliment, justified by the long and storied history of groping—one full of women who are reported to have relished the occasional uninvited pinch on the tush.”

It takes a special kind of ethical blind spot to dismiss the feelings of a present-day offended party because someone else, long dead, saw it your way. “Redskins” is, plain and simple, a racist term, as racist as any ethnic slur under the sun. If we wouldn’t celebrate a sports team called the (insert bigoted, derogatory term here), we should not celebrate this one. But it appears that slurs used to denigrate certain groups (see Native Americans) are taken less seriously when white nostalgic pride is at stake.

Snyder and company would do well to follow the lead of the white Texan man who reportedly had his Confederate flag tattoo removed when, in the wake of the Charleston shootings, he saw an elderly black woman grimace at the sight of it.

When faced with the distress the symbol on his arm caused another human being, nostalgic pride seemed suddenly crude and insignificant. This is the reaction of a normal, compassionate person. Worshipping a controversial flag or insignia doesn’t make one automatically bad or bigoted. People make mistakes; nobody is born enlightened. But continuing to worship such a symbol despite the harm it causes others? Clinging to your racist flag or jersey with a passion and intensity most people reserve for their loved ones? That’s more than a little weird. It’s scary.

Those in favour of keeping the Redskins name as is should ask themselves a simple question: Is the pennant in my childhood bedroom worth causing another person pain? If the answer to that question is “yes,” then they may brandish their team’s racist logo until the law dictates otherwise. But it would be nice if they could be honest about their zeal. They are not upholding an invaluable tradition, and they certainly aren’t complimenting anybody. They’re causing harm.