By Raf Casert and Lorne Cook, The Associated Press June 28, 2016 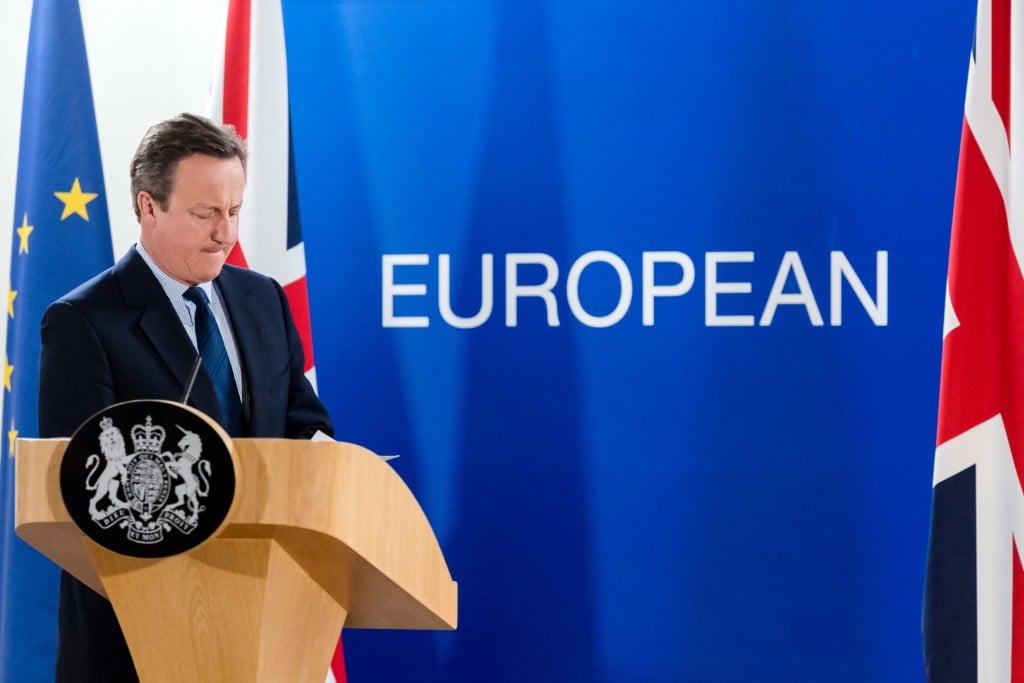 British Prime Minister David Cameron addresses the media during an EU summit in Brussels on Tuesday, June 28, 2016. EU heads of state and government meet Tuesday and Wednesday in Brussels for the first time since Britain voted to leave the European Union, throwing British and European politics into disarray. (AP Photo/Geert Vanden Wijngaert)

BRUSSELS – European leaders pushed Britain toward the exit door Tuesday, warning Prime Minister David Cameron that there’s no turning back after his country’s unprecedented vote to leave the EU and pressing for a quick and clear British departure plan to quell worldwide anxiety about the continent’s future.

Leader after leader rejected Cameron’s pleas for favourable conditions for Britain once it leaves, insisting there would be no cherry-picking of advantageous trade conditions. Yet Cameron frustrated them by refusing to initiate the divorce proceedings immediately, saying he would leave the departure negotiations to his successor.

“Everyone wants to see a clear model appear” for Britain’s future relations with the bloc, he said after what was probably his last dinner with EU counterparts, adding that he “can’t put a timeframe on that.”

German Chancellor Angela Merkel dismissed suggestions that Cameron’s successor might not start the formal EU withdrawal process because of the financial turmoil prompted by the vote and wide confusion about how to extract a country from the EU.

“I see no way to reverse it,” Merkel said after Tuesday’s meetings. She said this is not the time for “wishful thinking.”

Last week’s vote unleashed financial and political turmoil not only in Britain but across the EU, the world’s biggest economic power and home to half a billion people. The unexpected exit vote will rob the EU of its richest financial market, biggest military power and a diplomatic giant.

During the summit, Cameron sat at one end of the oval summit table in blue shirt sleeves, arguing for the best possible exit conditions for his island nation. Other EU leaders refused to negotiate, seemingly eager to kick Britain out as soon as possible to avoid further political and economic turmoil after the shock and emotion of the British vote to leave last week.

“We are not on Facebook, where things are complicated. We are married or divorced, but not something in between,” Luxembourg Prime Minister Xavier Bettel said.

In a special session of the EU parliament hours earlier, there had been cries of campaign “lies” from legislators regretting the loss of Britain, and taunting by “leave” campaigner Nigel Farage.

“You as a political project are in denial,” declared Farage, leader of the anti-EU U.K. Independence Party. “When I came here 17 years ago and said I wanted to lead a campaign to get Britain to leave the European Union, you all laughed at me. Well, you’re not laughing now, are you?”

When the traditional family photo of the leaders at the summit was taken, few were smiling. The common refrain at this unusual meeting was sadness.

Realizing the threat of a rift further tearing at European unity, Tusk said he was planning a special meeting of the EU leaders in Slovakia in September to chart a way ahead. German Chancellor Angela Merkel pledged to use “all her strength” to prevent the EU from drifting apart.

The leaders of Britain’s “leave” campaign hope the nation can still enjoy many perks of the EU internal market for business, while being able to deny EU citizens entry to the U.K. to address Britons’ concerns about unlimited EU immigration.

The leaders of Germany and France, the bloc’s biggest economies, made clear that isn’t an option.

French President Francois Hollande said Britain will have to meet strict conditions if it wants to continue to be part of the single market. “The four freedoms. You cannot have the freedom of capital movement, the freedom of goods, freedom of services and then say, ‘When it comes to people, stay put!’ Well no, it doesn’t work that way,” Hollande said.

Merkel said “Whoever wants to leave this family cannot expect to have no more obligations, but to keep privileges.”

Unshackled from Britain, the other EU members need to plot a common way ahead. Yet differences between founding nations in the west and newer members in the east are increasingly tough to reconcile.

“If the EU cannot solve the migration situation, then the challenges we experienced now in the case of the United Kingdom will grow,” he said.

Central European nations led by Hungary refuse to accept the imposition of EU refugee quotas. Further north, Austria, Germany, Sweden and Denmark have all tightened border controls in response to the arrival of more than 1 million migrants last year. Their entry overwhelmed Greece and Italy.

First, though, the EU needs to get rid of Britain.

EU Commission President Jean-Claude Juncker and other European leaders insist they won’t begin any talks until Britain invokes Article 50 of the EU’s Treaty of Lisbon, which sets in motion a two-year process to split from the group designed to unify Europe after the horrors of World War II.

Juncker said he had banned his policy commissioners from holding any secret talks with Britain on its future until London triggers the exit clause.

“No notification, no negotiation,” he said to resounding applause.

The EU won’t wait, however, to rethink its own future without Britain. With Cameron gone, the other 27 leaders are to meet Wednesday to focus on what they can do to prevent further fracture.