Eyewitness to disaster on Everest

When the avalanche hit Everest, mountaineer Gabriel Filippi sprinted for his life. He emerged to find an unthinkable disaster. 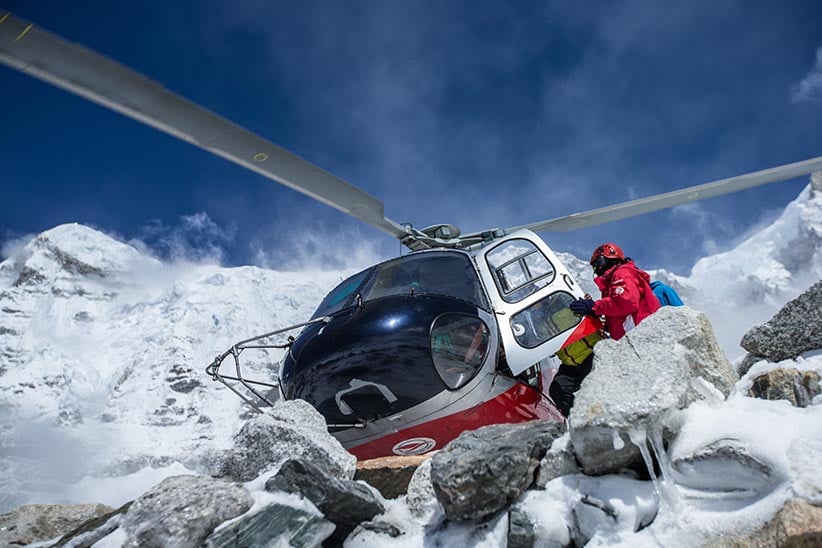 Hours before an earthquake reduced much of Nepal to rubble, Gabriel Filippi woke up at the Mount Everest base camp, made a cappuccino in his tent, ate some porridge and began evaluating his prospect on the mountain. One of Canada’s foremost mountaineers, Filippi had arrived at base camp days earlier, hoping to do what he’d already done twice before: scale the world’s tallest mountain and spend a few moments closer to the sun than any other human standing on Earth.

It was snowing as he exited his tent, as it had been for days. The 53-year-old Montrealer walked around base camp, checked the forecast and sent some emails. The snowfall had slowed every climber’s progress up the mountain, and it already seemed as though the route to the top would become overcrowded once the weather cleared. Filippi had decided that, if he got an opening, he would climb midway up Everest, then veer east, away from the crowd, and tackle the world’s fourth-highest mountain, Lhotse, instead. Forty-six minutes before the earthquake, he sent an email from his phone, detailing the situation at base camp.

“Weather is unstable,” he told a reporter. “Forecast remains the same for next six days, which will take us into the month of May. At that point, there will be only four weeks to finish/start acclimatization and go for the summit. If only one window, I will probably go for a single push from base camp.”

Filippi returned to his tent near the foot of the treacherous Khumbu Icefall, a glacial expanse of deep crevasses and shifting ice walls. More than 140 climbers had already entered the icefall. They’d been leaving in the dark the last few mornings, following in the footsteps of the Sherpa who’d secured ladders and lines all the way up to Camp 1, where some climbers were acclimatizing and resting, while others had begun pushing for Camp 2, which was still 2,348 m from Everest’s peak.

At 11:53 a.m, some 250 km from Filippi’s tent, the earth began shifting by an estimated three metres. Tremors rippled through the Nepalese countryside, toppling temples and buildings in Kathmandu and leaving more than 5,000 confirmed dead in the villages, valleys and streets below. Filippi was awaiting lunch 5,270 m above sea level when the ground started to shake beneath his tent. Scurrying out into the snow, he heard the sound of an avalanche tumbling toward base camp from the slopes of Pumori, which rises above from the west. A massive cloud was quickly moving toward the camp. An ice ridge had given way and all he could see was snow and ice rolling in his direction.

“RUN!” he yelled, as he sprinted toward the icefall, ducking behind a boulder as the snow from the avalanche enveloped him. For a minute or more, he could barely breathe in the driving wind and snow. He stayed hidden behind the boulder, fearing another avalanche might soon follow. When finally he raised his head to look around, he knew he’d been one of the luckier ones. He ran to his tent, grabbed his medical kit and headed west toward the section of camp most damaged by the avalanche. There he came upon what he describes as an “apocalyptic scene. Debris of tents, stoves, electronic equipment, clothes, sleeping bags, food, climbing gear scattered everywhere. In all this mess, people injured or dead, some still running, walking or unable to walk with a broken hip, legs or back. Some severely injured with head injuries . . . blood everywhere. I never faced such a disaster or badly injured people before. Some died in my hands as I was trying to keep them alive with assistance and recommendations of (a) doctor.”

Those who’d managed to escape their tents and hide behind rocks or boulders when the avalanche struck were more fortunate than those who’d been in their tents. Some survivors described climbing out of the snow as being like climbing out of their graves, while others lay critically injured, their bodies and heads smashed by flying rocks and ice.

All through the afternoon and into the night, Filippi and the others who were relatively unhurt by the avalanche ferried those who were injured on stretchers and into a triage of hospital tents. The dead were placed in sleeping bags and carried into a makeshift morgue. The first helicopters arrived at base camp around dawn on Sunday. Thus began a two-day operation to remove both the survivors and the dead from the mountain. 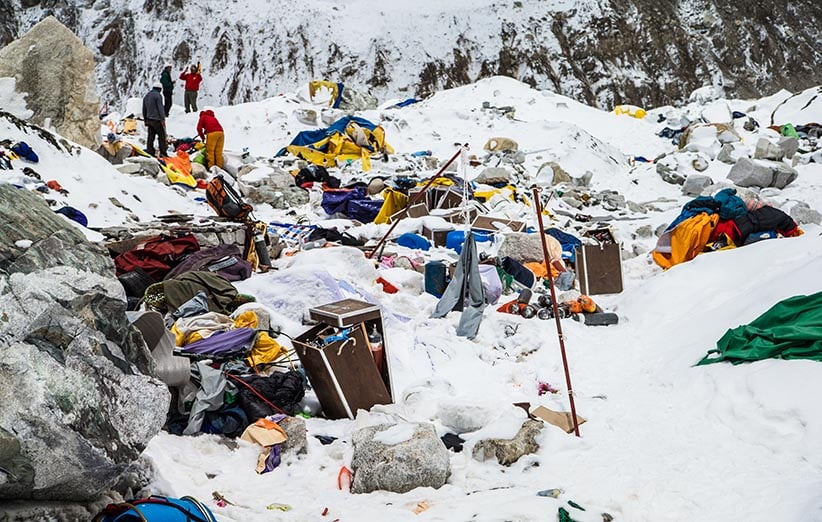 The April 25 earthquake, which hit 7.8 on the Richter scale, created the deadliest disaster on a mountain known as much for tragedy as triumph—a reminder to those on the mountainside that it is the shifting plates and proximity to a fault line that make Everest, which grows about four millimetres per year, what it is. Three days after the initial disaster, 18 climbers and Sherpa were confirmed dead, but that number was expected to increase. Several climbers remained unaccounted for, and some who’d assisted with the evacuation at base camp believed the death toll closer to 30. 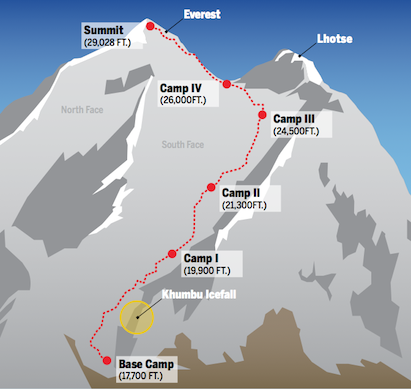 That number includes three Sherpa who perished in the Khumbu Icefall after the initial earthquake. An aftershock caused at least three more avalanches on Sunday. Those Sherpa were part of a government team who fix the route between base camp and Camp I, where 60 climbers had been trapped by the first earthquake. A further 80 climbers were up at Camp II. Also among the dead was an executive with Google who’d been working with a team to create a street-view map of the mountain’s southern face. He was killed when his tent was thrown during the avalanche.

The disaster caused by the earthquake occurred almost 12 months to the day after falling ice triggered an avalanche that killed 16 Sherpa in the icefall. Days after that 2014 avalanche—which caused the deadliest day on the mountain up to that point—teams of Western climbers abandoned the mountain as the Sherpa protested working conditions. As a result, several of those who failed to ascend Everest last year had returned this season, igniting concerns among Filippi and others who worried the southern route would be overcrowded. Those fears were amplified after increased snowfall in the days leading up to the earthquake left so many climbers stuck at base camp.

A day before the earthquake, Ottawa’s Elia Saikaly, a seasoned mountaineer and photographer, posted a photo to his Instagram account showing three Sherpa heading into the icefall around 2 a.m. Saikaly wrote: “I overheard our expedition leader saying: ‘Sending the Sherpas through the icefall is like sending your boys off to war. You never know if they’re going to come back.’ To be quite honest, I’m very concerned about this season on #Everest. There are major lineups in the deadly Khumbu Icefall which will likely translate into lineups higher up . . . I have no idea when we’re leaving or what’s going to happen next.”

By nightfall on Monday, April 27, three helicopters flying non-stop shuttles had evacuated roughly 140 climbers from the mountain. Because of the high altitude above Camp I, only small helicopters were able to partake in the rescue operation, limiting the number of survivors who could get on each flight to no more than three. Ropes and other equipment were also dropped by helicopter to the survivors at Camp I in an effort to help them re-establish a route down through the icefall, but, after the aftershock on Sunday, those trapped at Camp I deemed the icefall too dangerous to navigate and were forced to wait for rescue. 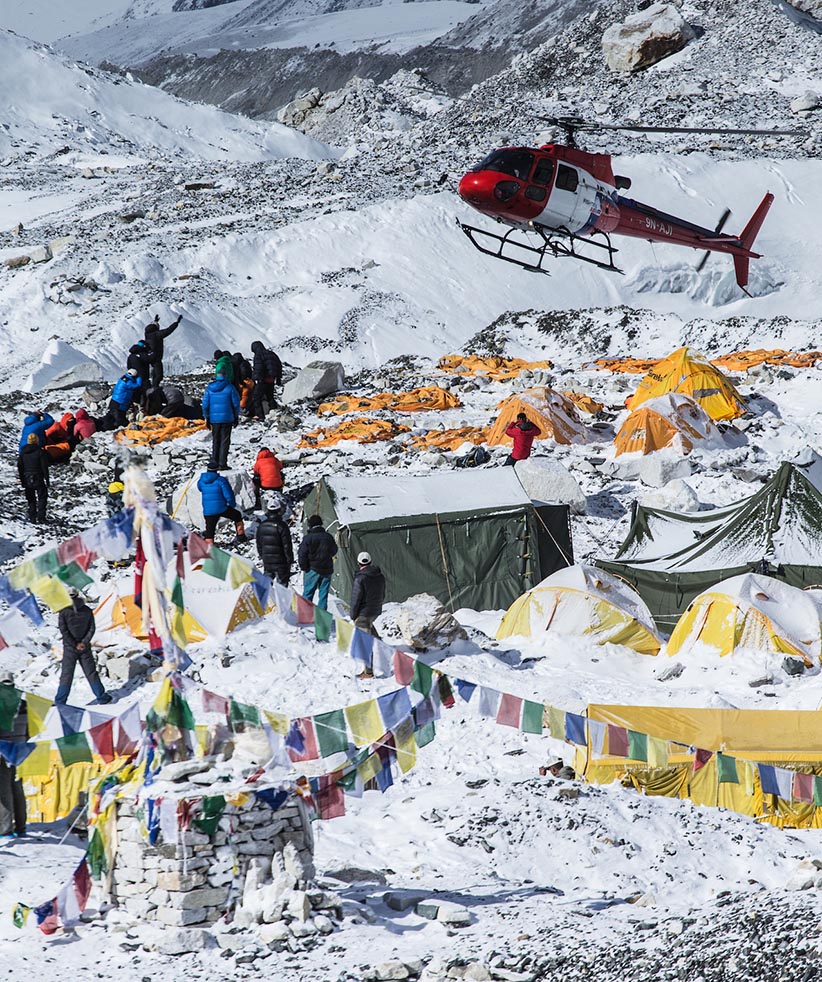 Back at base camp, several climbers began the long trek down into the valley to the village of Lukla, home to what’s commonly referred to as the most dangerous airport in the world. Filippi stayed until he could no longer lend any help to the sick and injured being evacuated from above. Saikaly was still at base camp as of Wednesday morning, Filippi said.

Four days after the earthquake, Filippi sat near the tarmac at Lukla, waiting for the clouds to lift so he could use his cellphone to reconnect with his wife and daughters back home. All the while, he slowly processed all that had happened on the mountain, and waited for an airplane to transport him and other climbers to the greater disaster in Kathmandu. “I hope to be able to help, but I don’t know how I will.”