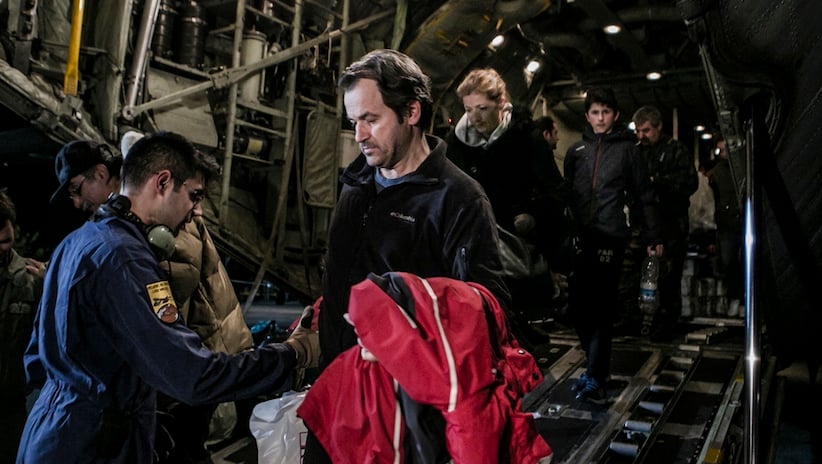 BARI, Italy – Rain and wind lashed the deck of the burning ferry tossing in the Adriatic Sea, and passengers were fighting for the last places on the only lifeboat. Natasha and Nassos Tsonas stood with their two sons amid the chaos, and the only thing left seemed to say goodbye.

They hugged. I love you, they told one another. And they prayed for a miracle to get them off the Norman Atlantic alive.

Suddenly, fire burst up through the deck, and the crush of passengers trying to squeeze into the lifeboat turned heel and fled. Instead of a wall of bodies, what separated the Tsonases from a glimmer of hope now was a wall of flames.

“We’re going to have to run through the fire,” Nassos yelled, “because that’s our only chance to get onto the lifeboat.”

Nothing could have prepared the Tsonas family for the terror it would encounter back home on Corfu, an idyllic Greek island beloved of tourists, writers and artists.

The family’s tourist shop is busy during the warm months, and 14-year-old Dimitri and 11-year-old Sebastian attend school most of the year, so the New Year’s trip was a rare chance for the family to get away together.

They boarded the Norman Atlantic full of excitement about their plans to drive around Italy, Austria and Germany, with a New Year’s Eve celebration at the German spa resort of Baden-Baden.

The family was asleep early Sunday when cries of “Fire! Fire!” came from outside their cabin.

Natasha didn’t think much of the noise. After all, there was no fire alarm – only an announcement for passengers to go to “Station 3” – so things couldn’t be that serious, she thought. Probably just a small fire that they’ve already put out. That’s why there’s no alarm; they don’t want people to panic.

Even when they opened the door to their cabin and saw smoke in the hallway, Nassos was relaxed enough to tell Natasha to get changed before going to the upper decks.

Once the family got there, the magnitude of the threat hit home with sickening speed.

Flames were everywhere, lashing out from the decks like a raging wedding cake. The floors were so hot it felt like their shoes were melting; the air so cold it felt like the frost could kill. Crew members were nowhere in sight.

The boys’ faces contorted with terror, and Natasha was filled with anguish and self-doubt: Why do these little ones have to suffer? Why have I brought them here to die?

But when the flames burst forth in front of them, Natasha’s mind went blank. The family ran for it – and somehow made it through the fire.

The lifeboat bobbed in the sea with 150 passengers on board, and there was room for only a few more. The winds bashing the ferry created gaps between the hull and the lifeboat dozens of feet below; one woman fell into the sea below them.

The boys jumped first. Then Natasha. Then Nassos. They all made it.

It was a taste of freedom – but their ordeal was only beginning.

Twenty-foot waves tossed the lifeboat like a plaything. Passengers vomited everywhere. Everybody was soaked to the bone from the freezing waters.

Natasha banged against other passengers, cutting and bruising her legs. The boys had stopped crying; shock had taken over. Their stomachs heaved as if in a roller coaster as the lifeboat pitched in the waves.

And so it went for three long hours.

And then they spotted another lifeline: the hulking cargo ship Spirit of Piraeus, making its way slowly toward the lifeboat.

Crew members threw down a rope and tried to pull in the lifeboat, but high winds kept knocking the boat against the hull, making it crack. Natasha feared the raft would break in two.

Finally, the crew members pulled them in and dropped a rope-ladder. Passengers began to climb up, one by one.

When it came to the Tsonas family’s turn, they huddled to decide who would go first. First-born Dimitri would lead, followed by Natasha who could help him if he got into trouble, then Sebastian and finally Nassos.

It was a terrifying ascent of 50 feet. Dimitri’s foot caught in netting; his mother was able to reach out and free his leg. They both made it to the deck. Sebastian was close behind, clambering up the rope-ladder. He too made it onboard.

Then the rope attaching the lifeboat to the cargo ship snapped.

The remaining survivors – including Nassos – were hurled back into the churning seas.

Natasha wrapped her sons in warm sheets, and waited. As the cargo ship tried to reach the lifeboat again, she fought memories of survivors being thrown into the sea by the choppy waves and piercing winds, and fears that the banging against the hull would chop the lifeboat in two.

It took maybe an hour to reattach the lifeboat. Nassos climbed up the ladder. He was safe.

On shore in the southern Italian city of Bari, the Canadian-born Natasha is overwhelmed with relief, tempered by sadness for those who didn’t make it.

“You think it would be a moment of joy. You see that in the movies,” she says. “It isn’t like that. We were ill. We were violently throwing up. We couldn’t control our bodily fluids. It was a really, really weird sensation.”

She’s proud of how her boys braved the ordeal, though she frets about the effect the experience will have on them.

For now, she’s just happy to hug them.

“We’ve just been here together,” she says, “not letting go.”

The harrowing flight of the Tsonas family from the Greek ferry that caught fire off the Albanian coast, stranding nearly 500 passengers and killing at least 10, is reconstructed from interviews with Natasha and Nassos Tsonas and accounts from passengers on the doomed ship.