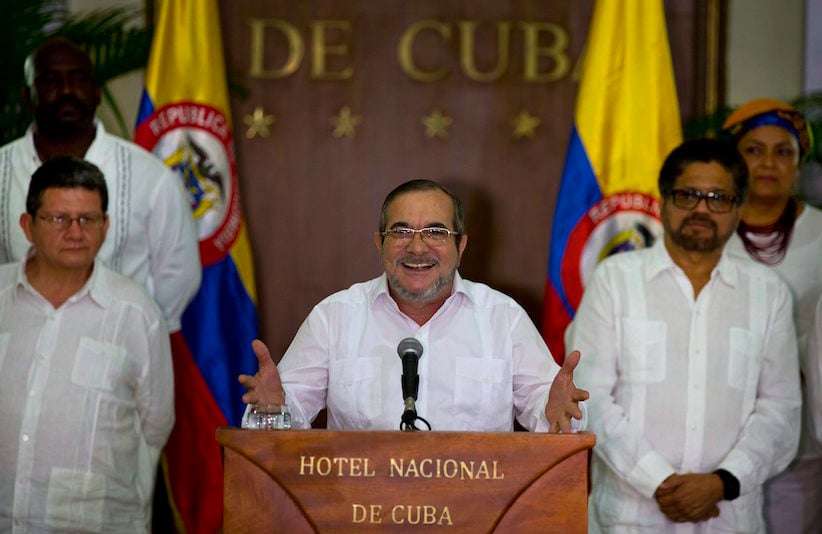 Commander of the Revolutionary Armed Forces of Colombia or FARC, Rodrigo Londono, better known as Timochenko or Timoleon Jimenez talks to the press, accompanied by Ivan Marquez, right, chief negotiator of the Revolutionary Armed Forces of Colombia and Pablo Catatumbo, left, chief of the FARC’s western bloc, in Havana, Cuba, Sunday, August 28, 2016. The commander of Colombia’s biggest rebel movement says its fighters will permanently cease hostilities with the government beginning with the first minute of Monday, as a result of their peace accord for ending five decades of war. (AP Photo/Ramon Espinosa)

HAVANA — The commander of Colombia’s biggest rebel movement said Sunday its fighters will permanently cease hostilities with the government beginning with the first minute of Monday, as a result of their peace accord ending one of the world’s longest-running conflicts.

Rodrigo Londono, leader of the Revolutionary Armed Forces of Colombia, made the announcement in Havana, where the two sides negotiated for four years before announcing the peace deal Wednesday.

“Never again will parents be burying their sons and daughters killed in the war,” said Londono, who also known as Timochenko. “All rivalries and grudges will remain in the past.” Colombian President Juan Manuel Santos announced on Friday that his military would cease attacks on the FARC beginning Monday.

Colombia is expected to hold a national referendum Oct. 2 to give voters the chance to approve the deal for ending a half-century of political violence that has claimed more than 220,000 lives and driven more than 5 million people from their homes

Top FARC commanders are planning to gather one final time in mid-September to ratify the accord.

FARC guerrillas are supposed to turn over their weapons within six months after the deal is formally signed. In return, the FARC’s still unnamed future political movement will be given a minimum 10 congressional seats—five in the lower house, five in the Senate—for two legislative periods.

In addition, 16 lower house seats will be created for grassroots activists in rural areas traditionally neglected by the state and in which existing political parties will be banned from running candidates. Critics of the peace process contend that will further boost the rebels’ post-conflict political power.

After 2026, both arrangements would end and the former rebels would have to demonstrate their political strength at the ballot box.

Not all hostilities are ending under the deal with the FARC. The much-smaller National Liberation Army remains active in Colombia, although it is pursuing its own peace deal with the government.