Ferguson, the NRA and the hypocrisy of silence

Why the NRA’s silence in the tear-gas wake of Ferguson, Missouri is so telling 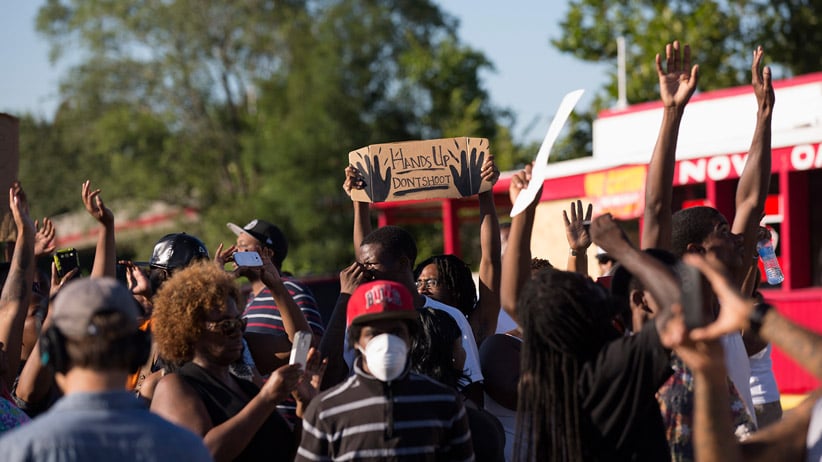 On the morning of Feb. 28, 1993, 80 heavily armed agents from the U.S. law enforcement agency Alcohol, Tobacco and Firearms stormed a compound in Waco, Texas, in an attempt to serve a search-and-arrest warrant to David Koresh, a 33-year-old preacher and leader of a religious sect. Four agents and six Koresh followers died in the ensuing gun battle. A little less than two months later, similarly armed FBI agents rammed Koresh’s compound with tanks, shooting some 400 canisters of CS gas into it. Seventy-four people, including Koresh and 25 children, died in the ensuing blaze.

The National Rifle Association came out, if you’ll excuse the pun, guns blazing. “If you have a badge, you have the government’s go-ahead to harass, intimidate, even murder law-abiding citizens,” said Wayne Lapierre, then the NRA’s executive vice-president, calling the agents “jack-booted thugs.” Along with the 1992’s Ruby Ridge assault, in which government agents killed the wife and son of white supremacist Randy Weaver, Waco became a stump issue for the NRA.

It’s easy to see why. Both incidents fuelled the group’s reigning paranoia that Americans are forever under threat from well-armed, Kevlar-wearing government commandos. We see the results in the NRA’s ensuing campaign today: weak gun laws, a lack of comprehensive background checks and a hobbling of the ATF itself through budget restrictions and politically motivated laws.

It’s why the NRA’s silence in the tear-gas wake of Ferguson, Mo., is so telling. The four-day police operation following the police shooting of unarmed teen Michael Brown has essentially shut down the city of 21,000. The resulting images are a gun-obsessed paranoiac’s nightmare made flesh: Phalanxes of flak-jacketed police officers line the streets, firing tear gas and pointing assault weapons at unarmed citizens, often with tank-like police vehicles behind them. Dozens of people have been arrested, including journalists and municipal politicians, and a media camera crew had its camera forcibly turned off and its equipment torn down. The “jack-booted thugs” haven’t just stormed a private residence or seized a compound—they’ve taken over an entire city.

And yet, there hasn’t been a peep from the NRA about the incident. The Gun Owners of America, the NRA’s even more paranoid offshoot, mentions Missouri only to congratulate citizen gun owners there. Former congressman Ron Paul spends much of his time regaling his flock about big-government abuses when he isn’t giving away assault weapons or asking for money. He, too, has been mum. (A blog post on his website, not written by Paul, decries the “militarization of police,” but chides protestors for not remaining calm.)

This seemingly perfect spectacle for NRA outrage—the shooting of an unarmed man, cops with outsized weapons, mass arrests—is flawed for one reason: Michael Brown was African-American. As such, he doesn’t fit the profile of the typical NRA member and, apparently, doesn’t warrant the group’s paranoid rage it has displayed in the case of Randy Weaver, a known racist who was armed to the teeth at the time of the standoff. The NRA’s lack of rhetoric about Michael Brown, like Trayvon Martin before him, speaks volumes about the group’s other reigning paranoia, this one, race-based.

As an 18-year-old black youth, Brown was less an NRA poster boy for the militarized overindulgences of law enforcement than the unspoken reason why many of its members buy guns in the first place. The NRA is too politically savvy to admit its racial bias; thankfully for us, proud Gun Owners of America member Ron Paul isn’t. “Given the inefficiencies of what D.C. laughingly calls the criminal justice system, I think we can safely assume that 95 per cent of the black males in that city are semi-criminal or entirely criminal,” was but one choice nugget from a series of newsletters carrying Ron Paul’s name from the ’80s and ’90s.

There are pro-gun types who have decried police action in Ferguson. Libertarian blogger Will Grigg wrote brilliantly about how Brown’s killing is both a demonstration of law enforcement’s tendency to use unreasonable force and the “low-grade military occupation” of Ferguson’s black residents. Rand “son of Ron” Paul, meanwhile, called for the immediate demilitarization of police.

Yet the NRA’s silence following the shooting of an unarmed American, and the subsequent police takeover of his town, is louder than hell.