FIFA and the long arm of Yankee law

Why did the US arrest a Uruguayan in Switzerland for taking bribes from Brazil over a Chilean soccer match? 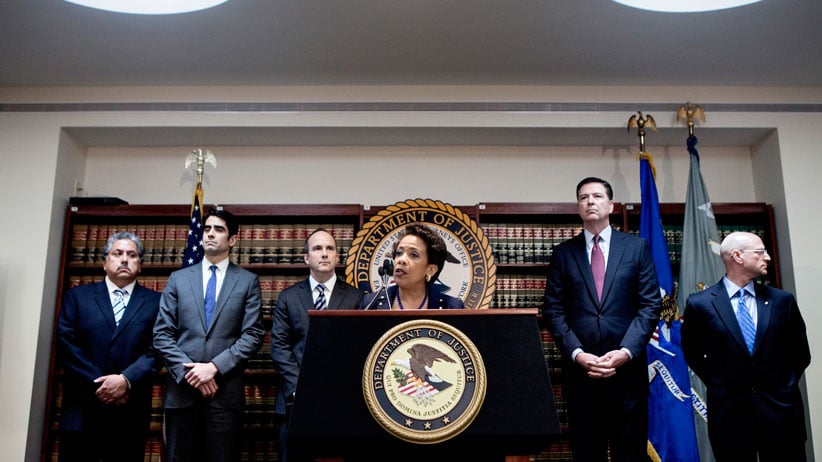 See if you can follow the ball. An American official has Swiss police arrest an Uruguayan, who works in Paraguay, on charges he took bribes from a Brazilian company in return for marketing rights to a soccer tournament in Chile.

This complicated play was executed last month by U.S. Attorney General Loretta Lynch, who charged 14 officials from the Fédération Internationale de Football Association (FIFA) with racketeering, bribery, wire fraud and money laundering. She alleges the defendants exchanged more than $150 million in clandestine and illegal payments. It seems extraordinary. How can American law reach so far beyond its borders, prosecuting foreigners, who are apparently perpetrating foreign crimes, on foreign victims, on foreign soil?

The theory of extraterritorial jurisdiction is an old one. Legal scholars during the reign of the Roman emperor Justinian were the first to argue that some laws were common to all mankind, allowing Rome to prosecute crimes that would be universally condemned, even if they occurred in distant barbarian lands. During the European enlightenment, it became accepted that there were some crimes, such as piracy and hijacking, that, by their very nature, were committed outside the territory of any state. Therefore, nations could extend the reach of their judicial systems, as the British did by interdicting slave traders sailing on oceans a world away. In America, this legal theory was most famously applied during the Nuremberg trials.

The FIFA case, though, is more domestic than it seems. The charges stem from a plea-bargain deal struck by Chuck Blazer, an American and former head of CONCACAF, a Miami-based body that governs soccer in North America, Central America and the Caribbean. After pleading guilty to racketeering and money laundering in 2013, Blazer provided evidence to U.S. prosecutors of widespread corruption in FIFA. He implicated other Americans, and American marketing contracts, and the subsequent investigation uncovered transactions in several American-based banks. So the FIFA charges are not especially extraterritorial after all. Nonetheless, it left many people around the world wondering why it was the United States, the only country that is proudly indifferent to soccer, that finally addressed FIFA’s infamous corruption.

It’s true: Americans remain somewhat puritanical, when compared to other nations. In Africa and Latin America, shameless bribery is a long-accepted fact of life. Indeed, in many countries, it is understood that when someone scrambles to the top of the ladder, to become the national representative to FIFA, for example, he has earned the right to some graft. And while Europeans may be offended by the corruption suffusing their “beautiful game,” they rarely pursue white-collar crime with the same passion America does.

But those unlikely arrests in Zurich are better explained by two other uniquely American attributes. First, unlike Canada or Europe, the U.S. legal system encourages plea bargains. In fact, 97 per cent of federal criminal cases are resolved through plea bargains. It is common practice to arrest someone like Blazer, threaten decades of hard time, then offer leniency if he confesses the sins of everyone he knows. This aggressive tactic makes it far easier to prosecute nebulous crimes where evidence is hard to collect, such as those in the FIFA case. But it is also open to abuse: false testimony or innocent people pleading guilty, which is why plea bargains are rare elsewhere.

Second, the American legal system is steeped in politics. Prosecutors, sheriffs, even judges are elected by the public, and Attorney General Lynch’s appointment was confirmed by the Senate after one of the longest and most partisan nomination battles in U.S. history. In that environment, high-profile cases that justify lengthy press conferences and attract the most news cameras bring a practical value. They ensure name recognition, support and votes, and they define successful careers.

When Lynch first began to pursue the FIFA case, she was the U.S. attorney in Brooklyn. If her primary goal was to safeguard the people of Brownsville or Fort Greene, she would not have spent any time worrying about soccer corruption half a world away. But, according to the political algebra of America, Lynch’s calculations made perfect sense. The proof, of course, is her subsequent elevation to attorney general.

In light of these circumstances, the spectacle of American justice reaching into a distant Swiss hotel becomes less extraordinary. Indeed, more arrests are quite possible, and we may even see the recently resigned FIFA chief Sepp Blatter sitting in Brooklyn’s notorious Rikers Island jail one day. Which may leave many of us hoping that perhaps a few Canadian senators keep an American bank account.