For sale: A fixer-upper on the U.S.-Canada border

Listed at $150,000, it's a two-storey manse with some minor logistical issues: half of it sits in Canada, the other in the United States 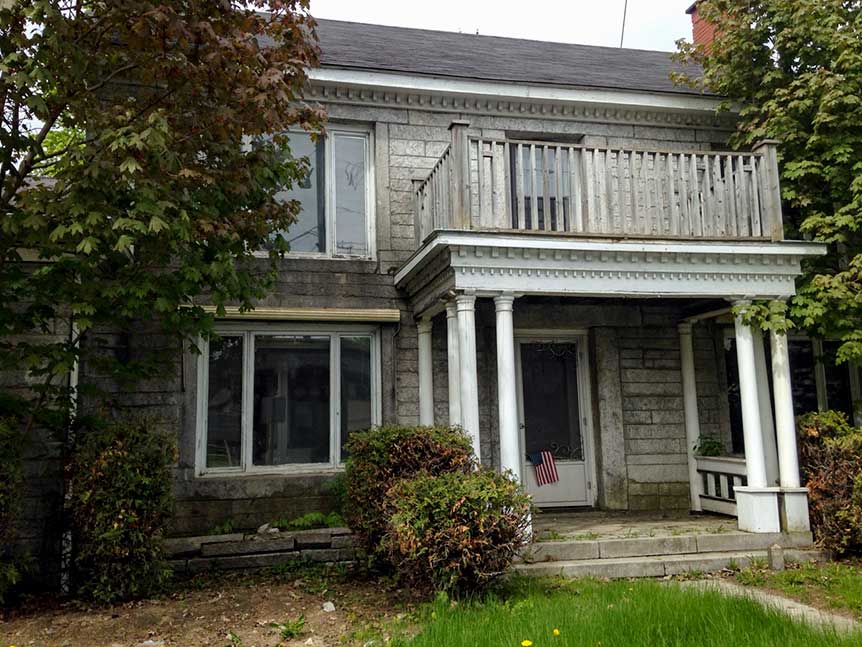 For sale, by owner, at a price barely one-tenth the cost of a closet-sized Vancouver condo or a dilapidated Toronto semi-detached: one of the most unique and historic houses in Canada, except that part of it isn’t.

The building on the market is a two-storey grey stone manse with a tiny obelisk just below the front steps that marks the exact Quebec-Vermont frontier, a stop-or-we’ll-shoot sign out front, and all the woes and wonders of the modern world passing right by its windows—the tourists and travellers, the scoundrels and smugglers, the haggard, footsore human flotsam fleeing Donald J. Trump. It has been a witness to the chronicles of this bifurcated continent for more than 200 years.

“I thought seriously that’s where I would retire,” says the deed-holder who, with his wife, is trying to sell it for US$109,000. “The best thing about it is the safety. It’s nice to have armed men right in front of your house, twenty-four hours a day.”

But the grey stone house resting snug between the Customs posts needs a lot of work, and, at 71, Brian Dumoulin and his wife Joan, both of them dual U.S.-Canadian citizens, feel that they are not up to the task. So they have listed it, thus:

A chance to own property on the Canadian border. It straddles the border, and a small portion of the house is in Canada. Historic building called the “Old Stone Store” was formerly a store and US/Canadian Post Office. Currently 5 living units in need of some fixing up to rent . . .  Canadians or Americans can buy! Sold “as is.” Come take a look!

But taking a look at a house that is bisected by ancient history and modern hysteria is more complicated than it sounds. Coming from the south, prospective buyers park in the driveway in the village of Beebe Plain in the state of Bernie Sanders; from the north, they disembark in Stanstead, Que., and go inside. But if you want to see the backyard, you’ll need a passport.

“When I was a kid,” says Brian Dumoulin, who inherited the property from an aunt more than 40 years ago, “we walked across and just played on both sides without even thinking about it. In that town, the border didn’t really exist. Inside the house, it was fun. My aunt slept in Canada and my uncle slept in the States. They had a Canadian TV and an American TV, a Canadian phone and an American phone. The electricity came from Vermont. The water came from Canada.”

“There’s a trap door that’s sort of a secret—you can drive in the garage on the States side, move your goods through the house and take it out the Canadian side, or vice versa. At one time, there was Prohibition in the States but not in Canada. Another time, there was Prohibition in Canada, but not in the States. During World War Two, Vermont was rationed with salt and my aunt would buy it in Canada and run it through the house.  And there were things you couldn’t get in Canada, like coloured margarine.”

“My aunt had a Buick Roadmaster with a 16-cylinder engine and she took all the seats out. She was a big lady, about 6-foot-4, and the Customs officers were intimidated by her. Today, if you try to tell them off, you get arrested. But she was notorious for running stuff. She made her money on the border. She played the border all her life.”

In 2017, only a fool would try to play with the U.S.-Canada border, which may be why the grey stone house has not yet moved, even with the asking price slashed by half to less than $147,000.  Inside are five apartments—two of them entirely within Canada and accessible from the Quebec-side door. Property taxes are paid, proportionally, to both countries, and the house has two mailing addresses.

“It is an amazing house,” says listing agent Rosemary Lalime of Vermont. “We have had about half a dozen showings, but it will have to be someone young and energetic who is willing to put in some blood, sweat, and tears.”

“It’s a strange situation,” agrees Brian Dumoulin, whose parents were Canadians but who was born in Newport, Vermont, because its hospital was closer than Sherbrooke’s, thus making him a dual-citizen from birth. “It takes someone who understands both countries and the reality since 9-11. Several people were looking at it but they were overwhelmed by the difficulties of the border. It’s really cut and dried—there’s nothing iffy about it—as long as they follow the rules.”

But those rules, since 2001, have become more and more obtuse and seemingly arbitrary in the several hamlets that are bisected by the no-longer-undefended boundary.  In, 2010, a local man was handcuffed and jailed by U.S. authorities for walking across the line to buy a pizza.

“Last year,” says Joan Dumoulin, “we were outside the American side of the house in our own driveway and the Canadian Customs agent made us come in and he asked us what we were doing in a U.S. driveway where he had no authority at all. He basically arrested us for being on our own property!”

“Until 9-11, everybody wanted to buy it and since 9-11, everyone’s afraid,” says Brian, a U.S. Army veteran whose father was a Canadian Customs agent. “It has always puzzled me that the most powerful country in the world is so paranoid.”

Meanwhile, the listing remains active, waiting for someone who seeks to make one home in two countries, or convert the building into the continent’s most eccentric B&B.

“If someone buys it,” Brian Doumoulin is asked, “could it be used for its original function?”