For some, Kos is a holiday island. For Syrian refugees, it's a waiting room.

On the small Greek island of Kos, a wave of desperate migrants were met by European sunbathers, weary locals and totally unprepared officials 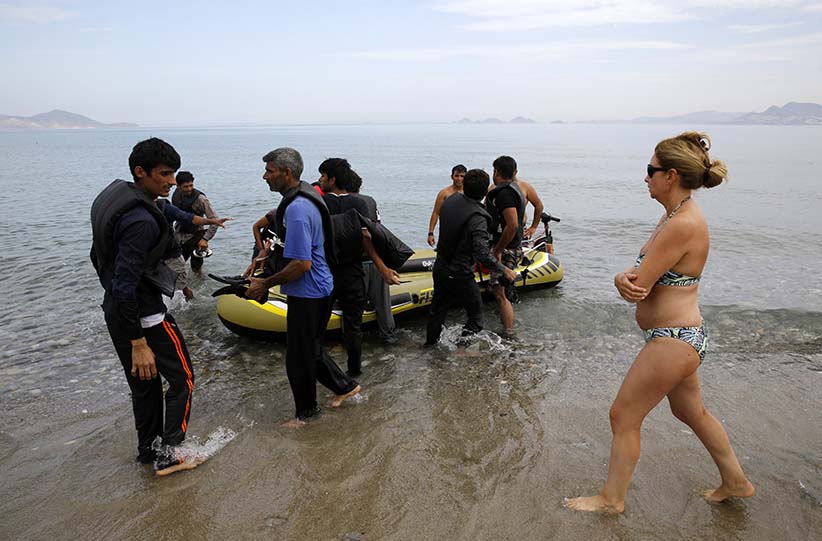 Update, Aug. 20, 2015: The cruise ship Eleftherios Venizelos has left Kos and has docked at Greece’s main port of Piraeus near Athens. This story, written in the fraught week before this development, does not reflect this.

Punctured water wings and sopping lifejackets are piled high on the pier like corpses in a mass grave. Greek coast guards have recovered them from the dozens of rubber dinghies that now quiver on nearby waves. Just beyond, several hundred survivors wait to board the newly arrived Eleftherios Venizelos: the cruise ship that will shelter refugees overlooks the flotsam upon which they came.

Jema Ahmad, a long-haired, 27-year-old Syrian law student who left Kobani when ISIS entered it, knows her solo journey to Germany will be dangerous, but she keeps looking at the families beside her. “Children, women  . . .  what happens to them?” she asks. She doesn’t look across the small harbour, where bartenders pour generous glasses of sangria and women in wedges dance to the electronic music pumping through the night sky.

This is Saturday night in the Greek island of Kos: beloved vacation spot of British, Dutch and German tourists, home to 30,000 islanders and, now, an open-air waiting room for approximately 7,000 mostly Syrian and Afghani asylum-seekers who have come to the island from Turkey so that they might to go elsewhere in Europe. For tourists, the trip between Bodrum, Turkey, and Kos is a 20-minute, $30 ferry jaunt. For refugees, it’s a two-hour, $1,500-or-more death-defying journey. Inadequate reception and coordination on Kos have stranded thousands of refugees on an island where they never intended to stay.

“They don’t want to be here, we don’t want them here,” says Greek restaurateur Kostos Choudros. On this, at least, many residents and refugees find common cause. Unwilling to provide basic support to asylum-seekers for fear of encouraging more to come, Kos officials appear caught off-guard by this summer’s crisis.

“Since last summer we have warned that the situation on the Greek islands is going to escalate,” Stella Nanou, a public information associate for the United Nations High Commissioner for Refugees Greece, explains beside the waiting cruise ship. The UNHCR has argued that Greece needs a central coordination body for refugees. Doctors Without Borders, meanwhile, has long-argued that Kos needs a functioning reception system. But Greek authorities didn’t heed either piece of advice.

By the time February’s waves calmed, 50 to 100 asylum-seekers rode them to Kos almost every day. Some could afford to stay in hotels; many couldn’t. The municipality identified an abandoned hotel outside of Kos Town and told refugees to stay there: hundreds did, without electricity or water. But as temperatures in Greece increased and fighting abroad persisted, arrivals to Kos accelerated. (By Aug. 14, 135,000 refugees had arrived to Greece by sea in 2015, a 750 per cent increase from the same period last year.) In Kos Town, they sleep in roads, parks and huts cobbled together from palm fronds and faded beach umbrellas. Today, along the café-lined harbour, tourists carry beach towels as they stroll beside refugees hauling tents.

The city has been overwhelmed. In the early hours of Tuesday, Aug. 11, riot police rounded up more than a thousand refugees, put them in a stadium and locked the gate. Three officers processed papers while riot police sprayed the crowd with fire extinguishers. By Wednesday night, hundreds of refugees had climbed out, many waiting for those still trapped inside.

Twenty-two-year-old Mohammed Jakub leans against the wall and offers to give others a boost, though he can’t move his right arm and walks with a limp. He was bludgeoned by a baton the night before, he says, and fell from the wall when climbing back over it to deliver food to his young siblings in the scalding enclosure. Many fainted, many were beaten. But Mohammad survived Syria and the journey from it. He knew he’d survive a stadium. “I don’t care about danger,” he says. “Everywhere, danger. This life, danger.”

One block away, diners inspect wine menus at a restaurant dotted with red-checkered tablecloths. Many local business owners say that they don’t know how to help all the refugees who need access to toilets and chargers for their phones. “We are crying for them, these people who risk their lives. But we are also crying for us,” says Konstantina Svinou, president of the Hoteliers Association of Kos.

Hotels cooked thousands of meals for refugees this summer, Svinou explains. Many locals are sympathetic to the refugees, but every business is connected to tourism; this humanitarian emergency, she thinks, will be bad for business. “Tourists, they don’t come to Kos to see this problem. They come to clear their minds.”

Some tourists understand that their affected vacations aren’t the real crisis. “This is reality. We want to see reality,” says Kees Roseboom, an addiction counsellor from the Netherlands, gazing out at a beach where Syrian children splash in the sea they sleep beside.

Not everyone arrives on these beaches alive. On Thursday, Mohammad from Homs, Syria (he won’t give his last name), raises a bullet-scarred arm to point at the boat that carried him here: it still floats in the water just beyond a line of sunbathing women. In a nearby shed, he finds a dinghy exactly like the one that capsized beside his boat. His three friends from university drowned after falling out. Mohammad cries when he speaks of it, turning away from a miniature red tourist-train rolling by.

Tent cities, a grisly hotel, stadium lock-ups and overstretched local businesses have embattled the mayor of Kos Town. On Thursday, Aug. 13, after George Kiritsis repeatedly avoided journalists, Maclean’s, along with reporters from two European publications, found him dining at Olympia Restaurant, near which refugee men had collapsed on the grass. The mayor says that the coming cruise ship would fill all 2,500 spaces with refugees before departing for Athens. Athens begs to differ: the ship will be used for reception and registration in Kos, the central government has said. The mayor previously gambled that refugees would steer away from Kos if it deliberately withheld adequate shelter and supplies, and he lost. But he hopes the ship will be the solution. “A good captain should prove himself in hard times,” Kiritsis says.

On Friday, as the boat docked at Kos Town, the mayor stood smiling on the pier and tried to direct traffic. A supply truck ignored him, nearly running him over.

Nearly 36 hours after arriving, on Saturday night, the Eleftherios Venizelos was still a ghost ship. Iraqis, Afghanis and Iranians are angry that only Syrians are invited aboard. Syrians are angry that the boarding time keeps changing. “Every day, there is a new plan,” says one coast guard, unauthorized to speak to media, as he waits for instructions. “Today I think we are on Plan Z.”

Julia Kourafa from Doctors Without Borders welcomes the cruise ship, saying it will speed up registration. But she calls it a “short-term solution.” Long-term solutions for reception and coordination will require more financial and technical assistance from the EU and leadership from Greek authorities, says the UNHCR.

Until that appears, meagre support for refugees will trickle in from surprising sources. A local retiree stops her poodle mid-walk to buy a family diapers on Saturday morning. A tourist enters a tense standoff between refugees and riot police at the station to hand out bread on Saturday afternoon. And then there’s Ahmad, the Syrian law student. At 1 a.m. on Sunday, as hundreds of refugees chant “Enough!” she’s among the first in line for the cruise ship. But before she steps aboard, she speaks with a Greek official. He breaks into a run, away from the ship and back to a screening tent. She follows. When asked by Maclean’s if she’s all right, Ahmad, one of the few English-speaking refugees here who can provide translation support, calls over her shoulder, “I will help them!”

After 2 a.m., having assisted dozens of other Syrians boarding the ship, Jema finally disappears below deck. Europop and protest chants are still pulsating around the harbour.