Assessment team deployed after earthquake in Ecuador killed more than 400 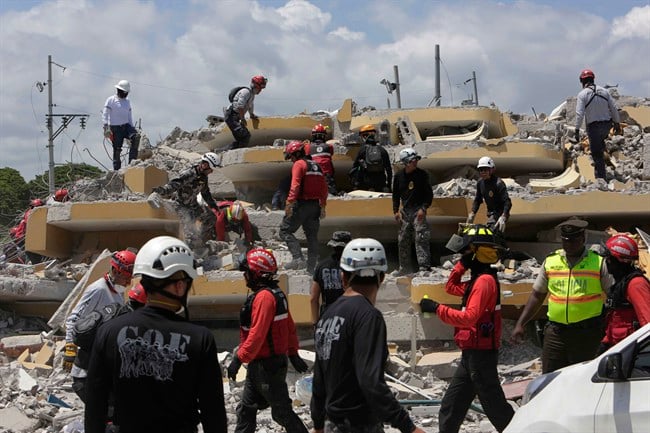 Volunteers search for survivors and bodies inside a hotel destroyed by the earthquake in Pedernales, Ecuador, Tuesday, April 19, 2016. The strongest earthquake to hit Ecuador in decades flattened buildings and buckled highways along its Pacific coast, sending the Andean nation into a state of emergency. (AP Photo/Dolores Ochoa)

OTTAWA – Canada has dispatched an assessment team to Ecuador to help determine what can be done to help in the aftermath of a devastating earthquake that killed more than 400 — including four Canadians.

Jennifer Mawn and her son, Arthur Laflamme, were reportedly killed when the roof of their residence caved in as the 7.8-magnitude quake struck Saturday night.

While the assessment team is typically sent as a precursor to Canada’s Disaster Assistance Response Team, no decision has yet been made on whether to deploy the DART, Bibeau said.

“We are really waiting on the recommendation of the team to make any decisions,” Bibeau said.

Earlier, Bibeau’s spokesman Bernard Boutin said in an email that Canada had received a request for assistance from the Ecuadorian government.

The DART was last deployed to Nepal last May after a devastating earthquake that killed more than 3,200 people. The team’s disaster response capabilities include a field hospital, engineering help and water purification.

“It will be health. It will be feeding people, providing shelters,” she said.

The aid agency Oxfam was already on the ground Tuesday with a seven-person team that was providing help with basic hygiene and clean drinking water.

Oxfam planned to send its first two-ton load of supplies on Wednesday as well.

But Oxfam Canada said Canadians would once again be called upon to contribute to Ecuador’s recovery after the Humanitarian Coalition of agencies raised $8 million last year for the Nepal earthquake.

“Canadians were so generous at that time and we hope they’ll help again in Ecuador,” said Ann Witteveen of Oxfam Canada.

The earthquake, the strongest to hit Ecuador since 1979, levelled buildings and buckled highways along the Pacific Coast of the South American country.

It was centred about 170 kilometres northwest of the capital, Quito.

Global Affairs has asked friends and relatives of those known to be travelling in Ecuador to contact its emergency response centre.

It is also providing consular assistance for the families of those killed.