While far-right candidate Marine Le Pen made it to the second round of voting, she's unlikely to win. But France's problems aren't about to go away. 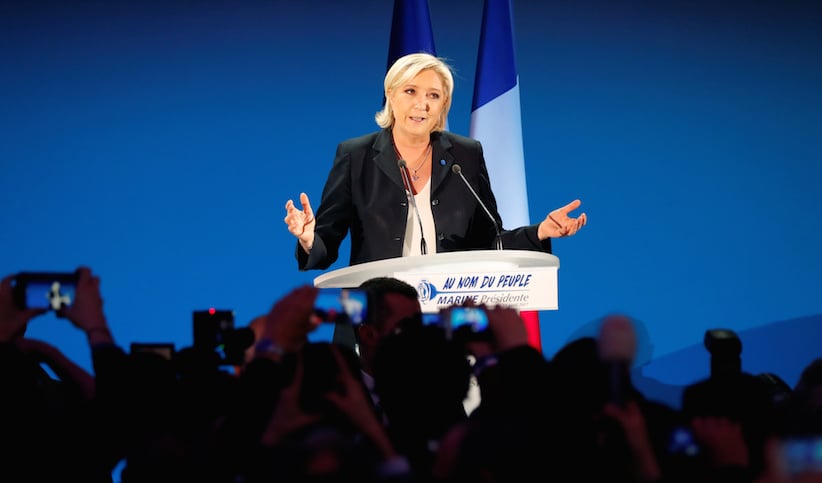 It says here in my Big Book of Foreign Correspondents’ Clichés that we’re supposed to have conniptions every time a member of the Le Pen family makes it to the second round of a French presidential election. It made a lot of sense the first time: On April 21, 2002, Jean-Marie Le Pen, the obtuse old paratrooper who’d called the Holocaust a “detail” of the Second World War, squeaked past the Socialist Party’s terrible candidate, Lionel Jospin, for second place. That was enough to get Le Pen a place in the second-round runoff against Jacques Chirac.

Since then, “un 21 avril” has been French shorthand for a huge political surprise, and pundits of the “Europe is always in crisis” school tend to underplay what happened next: People who’d never have considered voting for Chirac’s Gaullist (roughly, centre-right) RPR party voted for him anyway. “Le klepto,” as Chirac was fondly known, ended up beating “le facho” with more than 80 per cent of the second-round vote.

This time around, everything’s softer around the edges. Le Pen père won a little less than 17 per cent of the popular vote in 2002. His daughter, Marine Le Pen, seems to have won about 22 per cent on Sunday night, en route to her own runoff against the charming, maddeningly unspecific centrist Emmanuel Macron in two weeks. Fascism on the march? Maybe, but only to the extent that a little less fascism gets you a little further. The younger Le Pen has sharply reduced her National Front’s overt anti-Semitism, and her anti-immigrant, anti-Islamist, anti-European Union stances are not always easy to distinguish from, say, those of Nicolas Sarkozy, who was France’s nominally centre-right president from 2007 to 2012. That’s more to Sarkozy’s shame than Le Pen’s credit, but there it is.

In France, analysts often contrast the “Republican” vote with the “extreme” vote. This can be confusing to outsiders. “Republican” here means generally in agreement with the democratic values of modern France, especially as encoded in Charles de Gaulle’s 1958 constitution. Every French president since 1958 would qualify as a republican by this definition, from de Gaulle to François Mitterrand to Sarkozy to, assuming he wins, Macron.

On either side of the republicans are “the extremes,” Communist on one side and vaguely fascist on the other. Traditionally the republican stance has been to urge voters not to support either extreme if it comes down to a clear choice, which is why most Socialists held their noses and voted for their bitter enemy Chirac in 2002: At least they could agree with him about what the rules were.

Usually the extremes have been really easy to spot. In 1965, Jean-Louis Tixier-Vignancour, chief censor of the wartime collaborationist Vichy regime, ran for president and won 5 per cent of the vote against de Gaulle. In 1988 the far left, chronically divided but undaunted, fielded candidates representing the Parti communiste français, the Ligue communiste révolutionnaire, and Lutte ouvrière (Workers’ Struggle.)

The extremes have had good election years in the past. In 1969, with de Gaulle out of the running and the riots of 1968 fresh in memory, assorted more or less Communist candidates won a total of 28 per cent of the first-round vote. In 2002, led by Le Pen, the left and right extremes won about 31 per cent.

And this year? If you add Marine Le Pen’s vote and that of Jean-Luc Mélenchon, the most prominent far-left candidate, you get 42 per cent for the “extremes.” And for the first time, no candidate from either of the country’s mainstream political currents will be in the second round. François Fillon, who was prime minister during the Sarkozy presidency and who is many ways a formidable personality on the centre-right, also seems to have enjoyed hiring family members for made-up jobs, and he never recovered from the scandal. Benôit Hamon, the Socialist candidate, only got to run because France’s current Socialist president, François Hollande, has made such a hash of things he finally decided not to run for re-election. Even a good candidate could not have rescued the party’s fortunes, and Hamon was not a good candidate.

But here’s the thing: what makes Hamon a proper “republican” and Mélenchon an “extreme?” The two used to be pals. They’d plot procedural tricks together at Socialist Party conventions. Hamon stayed in the party as it moderated its positions when in power, and Mélenchon struck out on his own. Mélenchon is to the left of Bernie Sanders, but unlike some of the Communist candidates of the 1960s and ’70s, he had no interest in bringing elections to an end even if he had managed to win this one.

READ MORE: The meaning of a meeting of Europe’s leading nationalist minds

I’m not fond of Marine Le Pen. But this year at least, she is probably a self-correcting problem: just about all the major figures in both the Gaullist and Socialist movements are calling on their supporters to vote for Macron, and he’ll probably win handily.

But then he will have to try to solve France’s problems, which have less to do with “left” and “right” than with opportunity versus entitlement: in the country’s sclerotic labour market, employers are reluctant to hire because it’s too hard to fire, a chronic situation that blocks the path forward for too many young French citizens. Sarkozy was supposed to fix that. He lost to Hollande because he failed. Hollande didn’t even run for re-election because he knew he’d failed too.

Macron’s support is broad but shallow, his political experience almost non-existent. Imagine a younger, more naive Justin Trudeau winning an election with no party to back him, trying to govern a country with more problems than Canada has, under direct and frequent attack from terrorist groups, while well-financed opponents keep repeating beguilingly simple answers: boost everyone’s benefits with imaginary money, or close the borders. Macron doesn’t get to fail for free. His failure would tend to validate the creeping suspicion that France, in some way, doesn’t work—at least not France in Europe, or France with immigration, or France with markets.

The extremes this year were a little less extreme and a little more successful. In five years, they or their heirs will try again. That’s the scale of the challenge the young and untested Macron will face if he wins in two weeks.