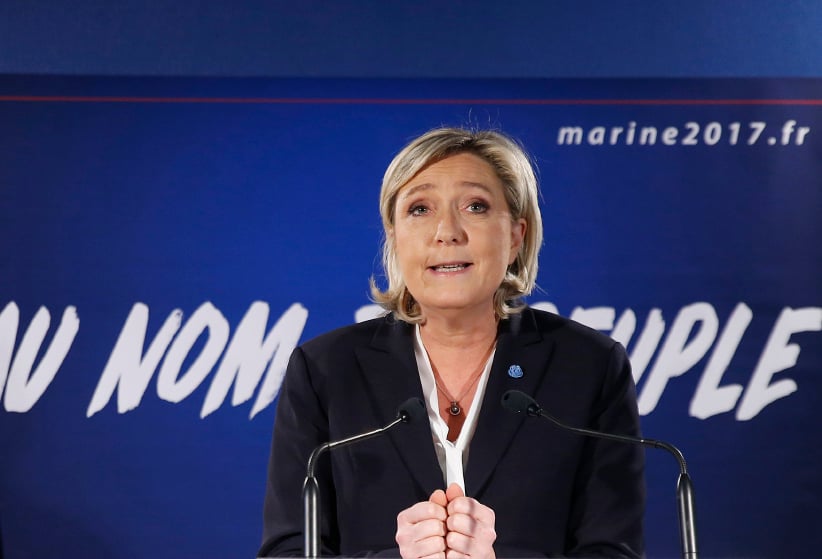 PARIS — Early voting began overseas Saturday in France’s most nail-biting election in generations, and the 11 candidates seeking to become the country’s next president silenced their campaigns as required to give voters a period of reflection.

Opinion polls showed a tight race among the four top contenders vying to get into the May 7 presidential runoff that will decide who becomes France’s next head of state. But the polls also showed that decision was largely in the hands of the one-in-three French voters who are still undecided.

Political campaigning was banned from midnight Friday until the polls close at 8 p.m. Sunday.

Polls suggested that far-right nationalist Marine Le Pen and Emmanuel Macron, an independent centrist and former economy minister, were in the lead.

However, conservative Francois Fillon, a former prime minister whose campaign was initially derailed by corruption allegations that his wife was paid for no-show work as his aide, appeared to be closing the gap, as was far-leftist candidate Jean-Luc Melenchon.

Security was tight — the government has mobilized more than 50,000 police and gendarmes to protect 70,000 polling stations, with an additional 7,000 soldiers on patrol.

Security is a prominent issue after a wave of extremist attacks on French soil, including a gunman who killed a Paris police officer Thursday night before being shot dead by security forces. The gunman carried a note praising the Islamic State group.

Voters made their choices in the Atlantic Ocean territories of Saint Pierre and Miquelon as well as in French Guiana in South America, the Caribbean’s Guadeloupe and elsewhere. Voters abroad could also cast ballots in French embassies Saturday.

The mad-dash campaigning of the last few weeks came to an abrupt halt after the Champs-Elysees gun attack by 39-year-old Karim Cheurfi. Three suspects close to the attacker remain in custody, Agnes Thibault-Lecuivre of the Paris prosecutor’s office said Saturday.

Le Pen and Fillon cancelled their last campaign events Friday over security concerns. Macron did too, but also accused his rivals of trying to capitalize on the attack with their anti-immigration, tough-on-security messages.

In a sign of how tense the country is, a man holding a knife caused widespread panic Saturday at Paris’ Gare du Nord train station. He was arrested and no one was hurt.

Well-wishers paid their respects Saturday at the site of the shooting, which was adorned with flowers, candles and messages of solidarity for the slain police officer, Xavier Jugele. Across from the Eiffel Tower, women from the group Angry Wives of Law Enforcement demonstrated against violence aimed at police.

Some believed French stoicism would prevent a lurch to the right in the presidential vote, even though the attack dominated French headlines.

“These 48 hours are not going to change everything … terrorism is now an everyday occurrence. It’s permanent, 24 hours a day. So we’re not afraid. If we’re believers in freedom, we must live with it,” said Marise Moron, a retired doctor.

“I’m not going to let myself be influenced by people who are trying to frighten us,” Paris resident Anne-Marie Redouin said near the heavily-guarded Eiffel Tower.

Others, fearful that Le Pen has been strengthened by the instability, said they would shift their votes from fringe candidates to make sure to keep the far-right out of power.

“With an attack such as this one, I think the National Front will get a good result. Therefore I’ll change my intention and cast a useful vote — either Melenchon or Macron,” said physics teacher Omar Ilys, 44.

The French presidential choice will resonate far beyond France’s borders, from Syrian battlefields to Hong Kong trading floors and the halls of the U.N. Security Council.

The election is also widely being viewed as a ballot on the future of the 28-nation European Union. The far-right Le Pen and the far-left Melenchon could pull France out of the bloc and its shared euro currency — a so-called “Frexit.”

A French exit could ignite a death spiral for the EU, the euro and the whole idea of European unity that was borne out of the bloodshed of World War II. France is a founding member of the EU and its main driver, along with former rival Germany.

Financial markets are already jittery over a possible Frexit, fearing capital flight, defaults or lawsuits on bonds and contracts. Le Pen’s team is downplaying possible apocalyptic scenarios and arguing that the euro — which is now used by 19 nations — is headed for a breakup eventually anyway.

If Le Pen or Melenchon win a spot in the runoff, it will be seen as a victory for the populist wave reflected by the votes for Donald Trump and Brexit — the British departure from the EU. Many French workers who have lost out by globalization are similarly fed up with establishment parties and attracted by promises of ditching the status quo.

Alternatively, if neither candidate makes it past Sunday’s first round into the runoff, that’s a clear message that populist nationalism is receding.

Macron and Fillon are committed to European unity and would reform labour rules. Macron has framed himself as a bulwark against Trump’s protectionism.