As France tries to wind down the camp, as many as 8,300 migrants seeking to get to Britain now face uncertainty 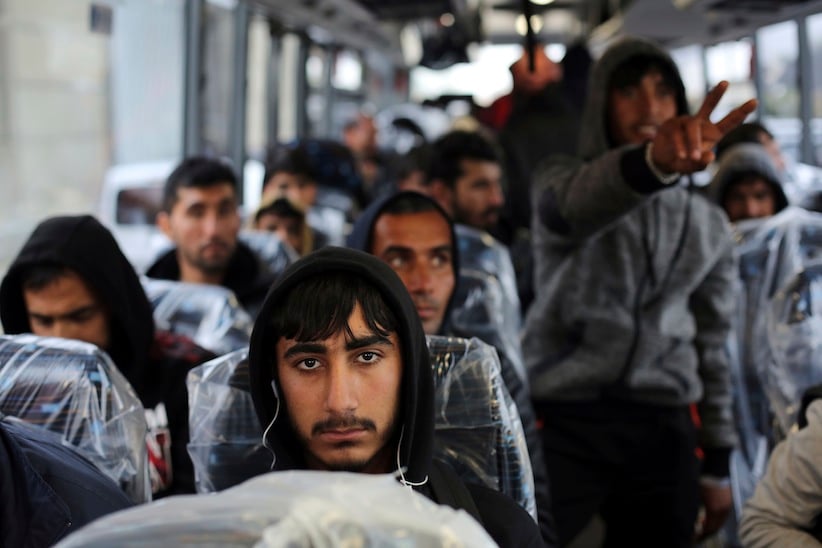 Migrants sit on a bus going to Normandy, as they leave the makeshift migrant camp known as “the jungle” near Calais, northern France, Monday Oct. 24, 2016. French authorities are beginning a complex operation, unprecedented in Europe, to shut down the makeshift camp, uprooting thousands who made treacherous journeys to escape wars, dictators or grinding poverty and dreamed of making a life in Britain. (AP Photo/Thibault Camus)

CALAIS, France—Carrying their belongings in bags and suitcases, long lines of migrants waited calmly in chilly temperatures Monday to board buses in the French port city of Calais, as authorities began evacuating the squalid camp they call home.

French authorities were beginning a complex operation to shut down the makeshift camp known as “the jungle,” uprooting thousands who made treacherous journeys to escape wars, dictators or grinding poverty and dreamed of building new lives in Britain.

Closely watched by more than 1,200 police, the first of hundreds of buses began transferring migrants to reception centres around France where they can apply for asylum. The camp will then be levelled in a weeklong operation. Hotels and even castles are among the hundreds of buildings officials have been converting to migrant housing.

“This is an operation we want to be peaceful and under control. So far it is,” French Interior Minister Bernard Cazeneuve said in Paris.

Authorities say the camp holds nearly 6,500 migrants who are seeking to get to Britain. Aid groups say there are more than 8,300.

The ramshackle camp in the sand dunes of northern France is home to migrants from Afghanistan, Sudan, Eritrea, Syria and elsewhere. After often harrowing journeys across land and treacherous seas, paying smugglers along the way, most reach a dead end in Calais, unable to find a way across the English Channel.

The harsh reality of the move hit migrants on Monday. Some were happy to leave, others were confused or in shock.

Throngs of migrants lined up at the registration centre where they were separated by category, like families, unaccompanied minors or adults.

A group of Sudanese got tired of waiting and returned to their spot in the camp, bags slung over their shoulders and laughing. They said they’d try again on Tuesday.

But basic information was lacking for many. “What should I do?” asked a 14-year-old newly arrived Afghan.

Mahmoud Abdrahman, 31, from Sudan, said he’d go Tuesday, too. He pulled a black knapsack from his shelter to prove that he was ready.

“It’s not good, the jungle,” he said, complaining of inadequate food and water and filthy toilets shared by hundreds.

Ultimately, Abdrahman wanted one thing more than anything else.

Afghan Imran Khan, 35, risks expulsion if he accepts the French plan to move him to a reception centre, because his fingerprints were taken in another European country before he arrived in France. Under European rules, he must be sent back to the country where he first registered.

“I will decide tomorrow (what to do),” he said.

Khan lives in a muddy tent, one of hundreds that are expected to be destroyed by the end of the week as their occupants depart, gradually closing down the camp that sprang up behind an official shelter housing women and providing showers and daily meals.

Unaccompanied minors, many with family members in Britain, were to be housed on-site in containers set up earlier this year as their files are studied in London to see if they qualify for a transfer across the English Channel. The humanitarian organization France Terre d’Asile says 1,291 unaccompanied minors live in the camp.

One 16-year-old Eritrean, Daniel, was heading to the registration centre with his cousin, also an unaccompanied minor. “I’m not happy because it’s finished, ‘the jungle.’ I want to go to the U.K.,” he said.

In Calais for eight months, he said he has tried daily to jump on trucks heading to Britain, like other migrants in the camp. “I don’t want France,” he insisted.

Fourteen migrants have died this year in the Calais area.

The unofficial camp, which sprang up 18 months ago, was previously tolerated but given almost no state help. Aid groups, and hundreds of British volunteers, have provided basic necessities. It devolved into a slum where tensions bubbled, friendships formed and smugglers thrived.

The forced departure of thousands is an enormous task, planned for months.

Authorities have had practice. They dismantled the southern half of the camp in March, a chaotic, even brutal, bulldozing operation that drew complaints from human rights groups.

This time, authorities hope to restore some pride by closing the camp that has been seen as a national disgrace in a peaceful, humane operation.

Officials have said that there will be a solution for each migrant—though expulsion may be among them for those who don’t qualify for asylum. Meanwhile, France will spend 25 euros a day on each migrant in the reception centres, according to officials. It was not immediately clear how long they will be allowed to stay.

Some doubt the camp’s dismantling will end the migrant flux into northern France which predates the slum.

A 2003 French-British accord effectively put the British border in Calais, stopping migrants there and putting the onus on France to deal with their plight.

Various camps have been set up in the region of Calais since the 2000s, with French authorities periodically closing them down.

Now, some fear those determined to cross the English Channel will scatter and create ‘mini-jungles’ along the northern coast in a never-ending bid to outsmart heavy security and high fences blocking their path to Britain.