French workers are resorting to kidnapping and violent threats 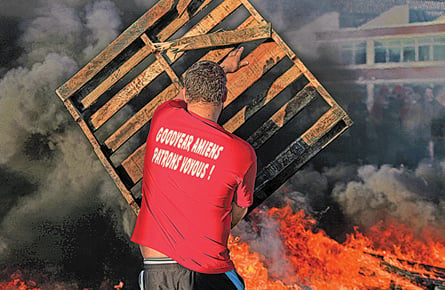 More than one century ago, Alexis de Tocqueville described his mother country of France as “the most brilliant and the most dangerous nation in Europe and the best qualified in turn to become an object of admiration, hatred, pity or terror but never indifference.” Indeed, as other Western democracies have moved along quietly this summer, slowly recovering from the economic crisis, in quick succession France has shocked, exasperated and bemused. Over the past few months, there has been an increase in labour militancy, marking a significant deterioration in the already poor relations between the country’s trade unions and the French government.

In the spring, employees from at least eight companies kidnapped executives, demanding concessions such as better jobs, higher pay and fewer layoffs. In July, workers at New Fabris, a bankrupt car-parts plant, and at Nortel Networks, the insolvent telecommunications company, threatened to explode bottles of gas at their factories if employers did not meet demands for a better severance package. And most recently, angry truck drivers, also concerned about redundancy money, vowed to pour more than 8,000 litres of toxic products into the Seine River.

While all those threats have since been lifted, deep and unresolved problems remain. Says Jonah Levy, an associate professor of political science at the University of California, Berkeley: “There isn’t a tradition of regularized corporatist bargaining, but there is a tradition of citizens having a lot of expectations that the state will take care of them.” But at a time of global recession, the hands of the state—not to mention those of financially besieged corporations—are tied. And that may mean that growing extremism may continue to be an ever more troublesome part of France’s labour relations landscape. As one union representative said to Britain’s the Guardian, “People are desperate. Movements are going to only get more virulent, more violent.”