In the wake of the Paris attacks, thousands of French Jews are fleeing—not to Israel, but to Britain 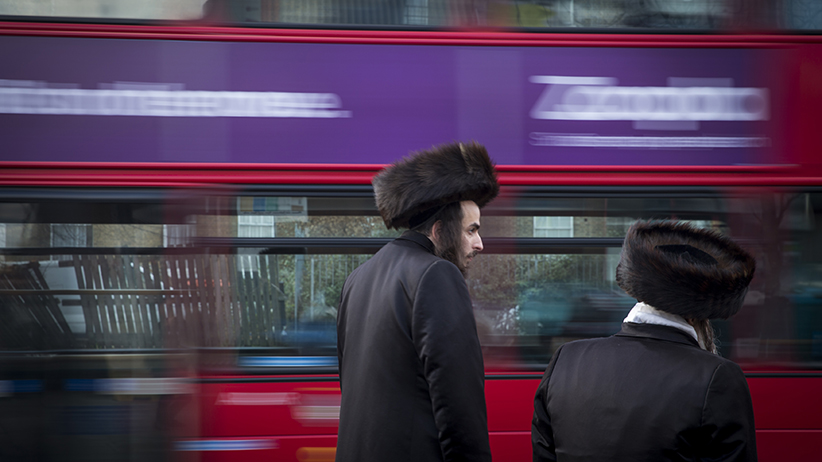 The return of widespread anti-Semitism has become an old story in modern Europe. For a couple of years now, there have been reports of sharp rises in anti-Jewish protests and attacks in countries as culturally varied as Hungary, Belgium, Germany, Greece and France. Gallons of ink have been spilled in recent years chronicling the “new exodus” of Europe’s Jewry to safer cultural ground­—mostly to Israel.

But in the wake of the Charlie Hebdo massacre and subsequent Jewish supermarket attack in Paris, France has come under particular international scrutiny for its incidents of religious hatred. Because of this, many of France’s Jews are leaving for safer shores and a large number are crossing the English Channel to Britain.

Precise numbers are difficult to come by because of porous EU borders, but, last week, the Jewish Chronicle reported that as many as 6,000 French Jews were planning emigrate to the U.K. in the aftermath of the recent attacks. And the Times reported that, of the estimated 20,000 French Jews in Britain, between 4,000 and 5,000 had arrived in the past two years.

In London, Jewish community leaders say the influx is palpable. The St. John’s Wood synagogue in north London has set up a separate French-language congregational service that is now regularly attended by more than 100 people each week. French voices can be heard all over London, particularly in South Kensington, where many French immigrants—Jewish, Muslim and Christian alike—have chosen to settle. And while many French Jews will have come to London to enjoy the opportunities of the economic recovery, some are undoubtedly there because of the rise of anti-Semitism in their homeland.

The Jewish Journal published a study that found a 58 per cent rise in anti-Jewish attacks in France as long ago as 2012. Last summer, during the Israeli bombardment of Gaza, hundreds of Parisian protesters repeatedly attacked two separate synagogues with bricks and ﬁrebombs. Newsweek compared the attacks to a scene “out to the pogroms of czarist Russia” or Europe in the 1930s. Others said it was like the intifada (the Palestinian uprising against Israeli occupation) come to France. It was a disturbing spectre of religious violence, and one that made France’s established Jewish population sit up and take note.

Regine de Frettes, 55, a French Jewish IT business owner, came to work in Britain as an au pair 30 years ago and ended up marrying and settling in Britain. Today, she says her extended family, who all remain based in Paris, are, for the first time, seriously considering leaving France. “My elderly parents are devastated that, twice in their lifetime, they should see this level of anti-Jewish feeling, but they are too old to move. But my younger cousins in their 30s and 40s are all planning to leave for either Britain or America. They don’t want to leave, because they feel completely French, but they just don’t feel safe anymore.” 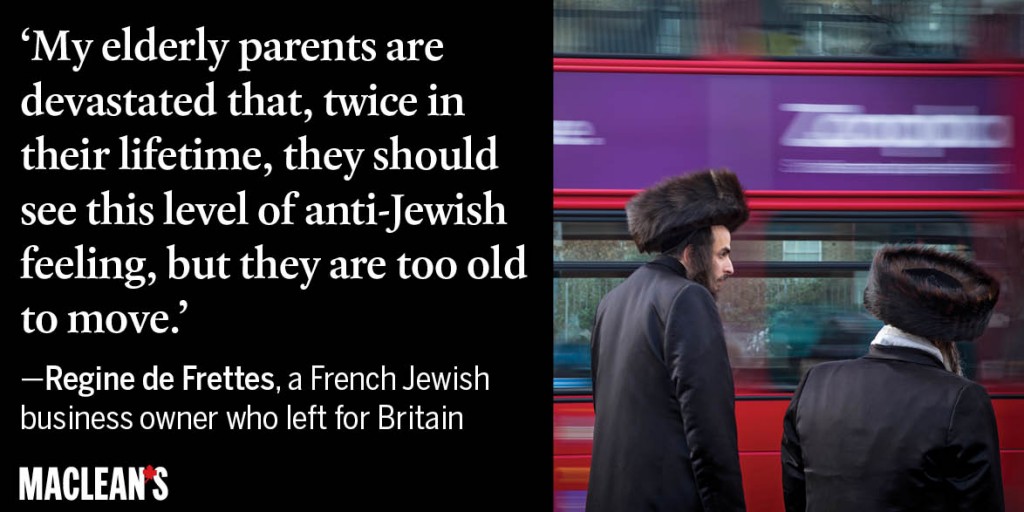 Daniel, a 42-year-old French financier, moved his wife and two small children to London 18 months ago after he was offered a job at a major bank. He asked that only his first name be used, as he didn’t want his British colleagues to know he’d suffered prejudice in Paris. “It’s not something one likes to talk about but, yes, it’s definitely there,” he said of the anti-Jewish sentiment in France. “There were many reasons to move my family to London, but I’m sad to say that was one of the them.”

De Frettes describes how, on a recent trip to Paris for her niece’s bat mitzvah, her relatives advised her family not to hang around on the synagogue steps before or after the service, and warned her husband not to wear his yarmulke on the street for his own safety. Her niece, she says, has already had to change schools because of religious bullying.

A 2012 study found that more than half of Jewish people in France had come to believe that anti-Semitism had become “a very big problem” in their country—a figure that’s undoubtedly much higher today. Comparatively, only 11 per cent of British Jews felt the same.

But recent numbers show this might be changing. Two reports published last week by Britain’s campaign against anti-Semitism warned that more than half of British Jews had considered emigrating themselves, and almost half of Britons held at least one anti-Semitic opinion. The findings were drawn from a YouGov survey of 3,400 Britons that found 25 per cent agreed with the sentence: “Jews chase money more than other British people,” and 20 per cent believe Jews are less loyal to Britain.

But de Frettes, who peacefully practises her religion in a small town in Berkshire, insists that, in contrast to her Parisian family, she has never experienced anti-Semitism in Britain. “I feel it’s a very tolerant and peaceful place to live.” As for her French relatives planning to join her, she says they are making their arrangements and should be arriving in the coming months. “My only hope,” she says, “is that they don’t leave it too late.”