Freddie Gray: The day after the night before 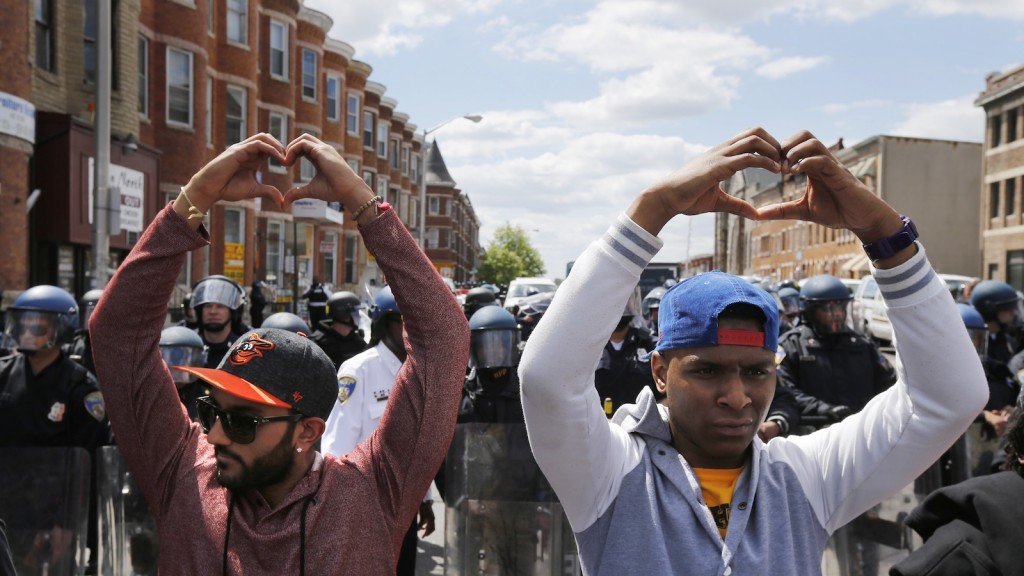 Members of the larkommunity make heart gestures with their hands in front of a line of police officers in riot gear, near a recently looted and burned CVS store in Baltimore, Maryland. (Jim Bourg/Reuters)

It is five short blocks from Presbury Street, where Freddie Gray was arrested, to the New Shiloh Baptist Church, where they held his funeral. On April 12th, Gray was chased down by Baltimore Police. A local resident filmed him screaming in pain as officers picked him up and dragged him to their van.

Rosa Washington watched it from her stoop. She points to the sidewalk in front of her. “They put a boot on his head. He kept yelling, ‘You already stung me!’ but they didn’t stop. They jumped on his leg.”

An hour later, at the police station, Gray had become unresponsive. An ambulance was called, but it was too late, he had slipped into a coma. A week later, Gray was dead, with what the Baltimore Sun says were three broken vertebrae and a crushed larynx. He was 25 years old.

Six officers were suspended and the Justice Department opened a civil rights investigation. Protests grew, and after the funeral they became violent. Local youth sent out a call on social media to attack a nearby mall. In the ensuing chaos, 19 buildings and 144 vehicles were set on fire. More than 15 police officers were wounded and 202 people were arrested.

Rosa watched Gray get arrested from her stoop. “Happens all the time, but never that bad. They stepped on his head.” pic.twitter.com/EGadnvmOdM

Rosa Washington lives in West Baltimore, in the Gilmor Homes, a housing project. These are walk-up apartments clustered around small courtyards.

There are kids everywhere and groups of men standing on corners. “The police are stopping us all the time,” she continues, “but never that bad.”

This is a neighbourhood that is not doing very well. The murder rate in Baltimore is 37 times higher than it is in Vancouver. Within a kilometre of where Gray was arrested there have been 11 people killed in the past six months alone. Almost a quarter of Baltimore lives below the poverty line, and in this stretch of streets it is far higher. Unemployment is particularly high and you can walk down blocks where all the storefronts and the buildings above are vacant.

Shanae Barnes is standing on the sidewalk a little way up the street. She is a college student, and works at a copy shop. “Every day I get pulled over.” She points up the street: “One morning I was walking up to the Vietnamese shop around the corner, police stopped me and gave me a citation just for not having my ID.”

Related: Meet the man trying to bring calm to Baltimore with dance

The Vietnamese shop is called the Hae-Tteuneun Market. It was burnt during the Monday-night riots. Randy Howell is leaning on a light post in front, talking loudly to some friends and watching the store being boarded up. He lived next door, and his apartment burnt down, too.

“I ain’t mad they burnt it down. Enough is enough!” He explains the shop was no good. “They only sold liquor, and cigarettes, no fruit, no fresh meat.” His friend jumps in: “They were just here to rape the hood.” Howell gets angrier and louder about the police, as he points up the street where you can hear sirens.

This is Randy. His place burnt down last night, but he doesn’t care. “Enough is enough.” pic.twitter.com/WIc1KjFUOe

On the corner of West North Ave, where Howell pointed, Marcia Ricks is sitting on a shop front with her grandson, watching the police cars.

Two grey armoured personnel carriers rumble past. An officer in a riot helmet and sunglasses stands in the gun turret and pivots around looking at Ricks and her grandson as they rush by. A block up, you can see a crowd of a couple hundred people milling around in the middle of the road. They face a line of police standing behind shields. Ricks looks at them and shouts out: “All they just gotta do is lock up those cops who killed Freddie and we’d be good!”

Overhead, a National Guard Blackhawk helicopter hovers so low it’s hard to hear her speak. Schools have been closed, and the university is shut down.

Family watching a police standoff: “All they gotta do is lock those cops up for murder and all of this will stop.” pic.twitter.com/YbebAIKrNj 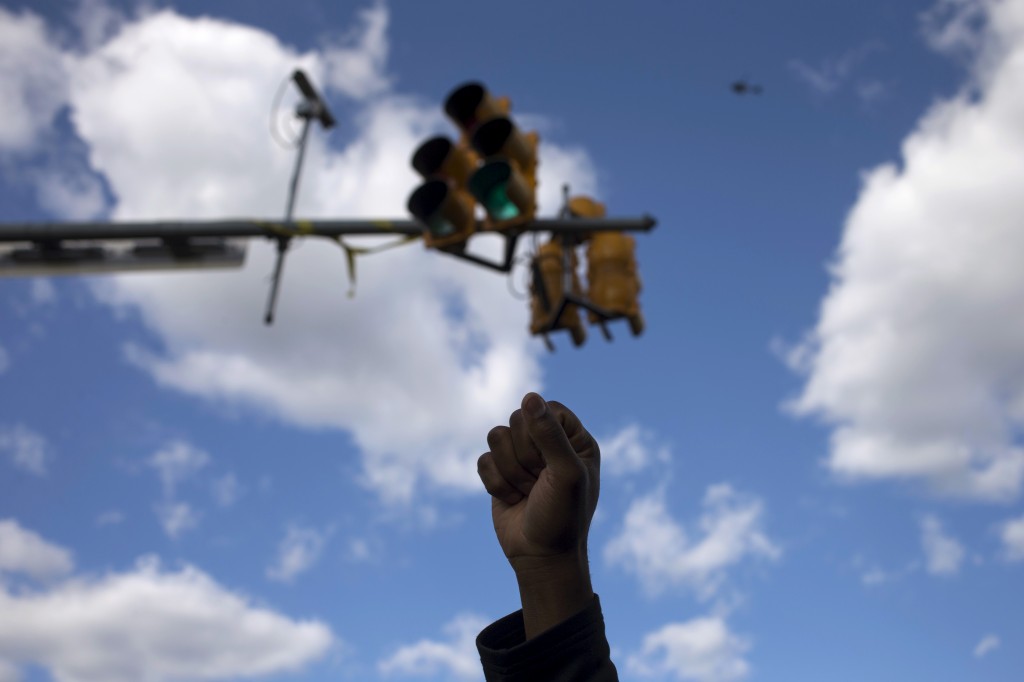 A helicopter hovers overhead as a man protests the death of 25-year-old black man Freddie Gray near riot police who lined the intersection of North Avenue and Pennsylvania Avenue in Baltimore, Maryland April 28, 2015. (Adrees Latif/Reuters)

In some parts of the city, public transport is suspended. There is a curfew. Governor Larry Hogan declared a state of emergency and requested an additional 5,000 police officers from other cities. “I have not made this decision lightly,” he said. “Baltimore City families deserve peace and safety.”

It is unclear if the governor was referring to all Baltimore City families. The police and court documents recorded that Gray had been arrested “without force or incident.” The deputy police commissioner announced that the preliminary autopsy showed he had suffered “a significant spinal injury that led to his death.” His family provided more details, including that his spine had been 80 per cent severed.

In front of police line, a small shop owner opened up, wheeled out a BBQ, & is selling hot dogs while everyone waits. pic.twitter.com/YER2PK2YM4

At the corner of North and Fulton, the All-N-1 shop is still open. If you pass a dollar through the slot in a bulletproof cage, you get a handwritten chit for a hot dog. The owner has put a barbeque out on the sidewalk and is selling lunch to the growing crowd watching the riot police watch them.

The mood is friendly. Kids are running between legs. Some gang members, with red bandanas wrapped around their arms, walk by quickly. You can smell weed in the air. A women next to me points to the police and asks her friend: “Where were they last night when our pharmacy burnt down? They’re just protecting white shit.” 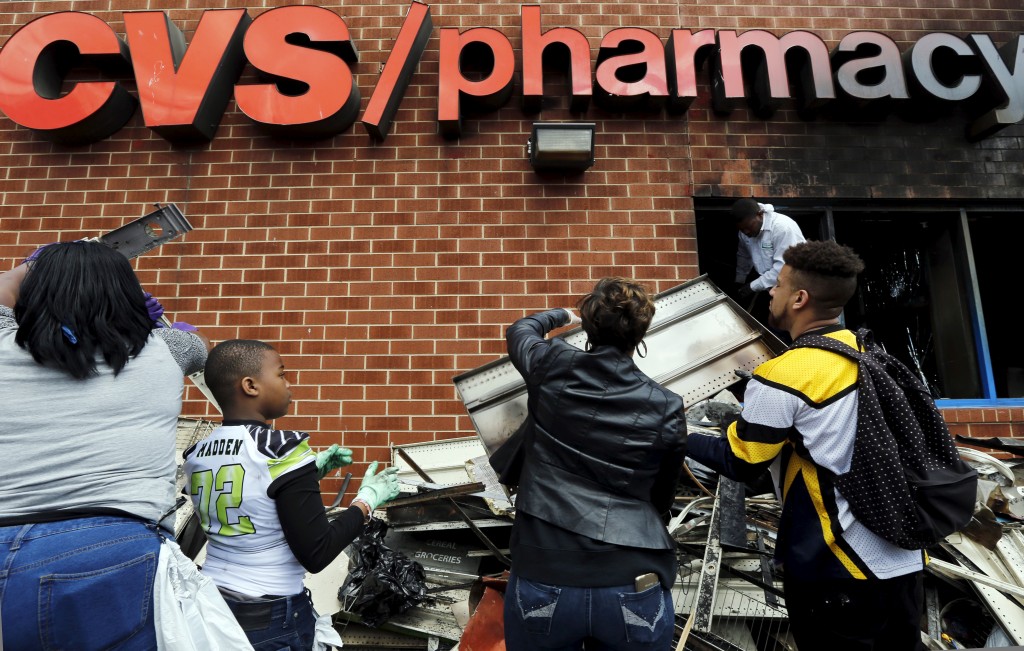 Members of the community work to clean up a recently looted and burned CVS store in Baltimore, Maryland, United States April 28, 2015. (Jim Bourg/Reuters)

As I eat my hotdog, a woman approaches and asks if I’m an undercover cop.

When I assure her I’m not, she immediately starts talking about the mayor, demanding that I write down what she has to say. In 2010, after her predecessor was forced to resign following a conviction for embezzlement, Stephanie Rawlings-Blake became mayor of Baltimore.

She is African-American, has a law degree, and when she came into office she focused on neighbourhoods like this. In particular, she introduced an initiative to deal with all the vacant buildings.

But the woman next to me doesn’t like her. “Watch her at her press conference. Her head is down. She’s reading! She’s just reading words someone else wrote.” Others nod. They point out that the mayor shut down the local recreation centre. The pools are going to be closed this summer because they can’t afford lifeguards.

A little farther north on Monroe St., Tony Pervez and Mohammad Noor are watching workmen put a new door on their shop, the M&N MiniMart. “They took everything,” Noor says. Looters cleared them out the night before, and left nothing behind. “It wasn’t racism, just bad luck,” Noor explains, and he promises they will reopen tomorrow. Pervez nods, then looks up as a police helicopter flies above them in a long sweeping turn, circling over the crowd behind us. 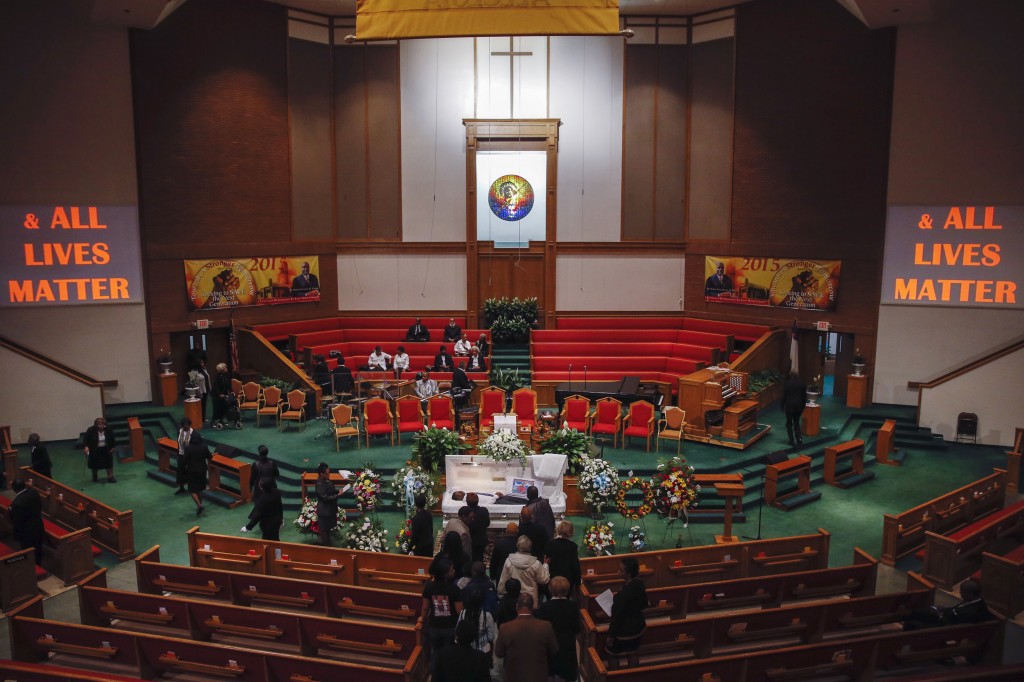 The New Shiloh Baptist Church is a modern building a just one more block up Monroe St. A friendly lady sits at the reception desk, and points me to a chair as I wait for the pastor. Rev. Harold Carter Jr. comes out and greets me with a blessing and a glass of ice tea. The night before, he had helped bury Freddie Gray.

“It’s about the economy. It’s about jobs and unemployment.” He sits behind his desk; on the wall, a flat screen television is on CNN. A live shot from a helicopter shows the crowd in front of the All-N-1 shop has grown.

“We have the worst schools in the city, in terms of the buildings. There are no recesses for the kids. The budgets have been cut and cut. Even gym classes are cancelled.”

Rev. Carter buried Freddie Gray last night. “I’m an optimist. I’m a man of God. I have no choice.” pic.twitter.com/m8e9in3Zco

Rev. Carter describes coming back to the church after the funeral the night before. There were gang members waiting for him: Crips and Bloods.

The police were reporting that the two gangs had “entered into a partnership to ‘take out’ law enforcement officers.” They promised the Reverend this wasn’t true and wanted to work with him to stop the looting. “But the media won’t tell you that.” On CNN, Wolf Blitzer is reporting on whether the Orioles game will go ahead as scheduled.

Back outside, it is sunny. The sky is clear, and the trees around the New Shiloh church are green with fresh spring leaves. A fire truck races by, heading back down towards Presbury Street and the Gilmor Homes, its horn blasting. An ambulance follows shortly behind. Then one, two police cars, their lights flashing. There are more helicopters above, and they seem lower. I walk back down, past the growing crowd on North Ave., past the line of police, back to the Vietnamese shop, then south towards downtown Baltimore, looking for a cab.