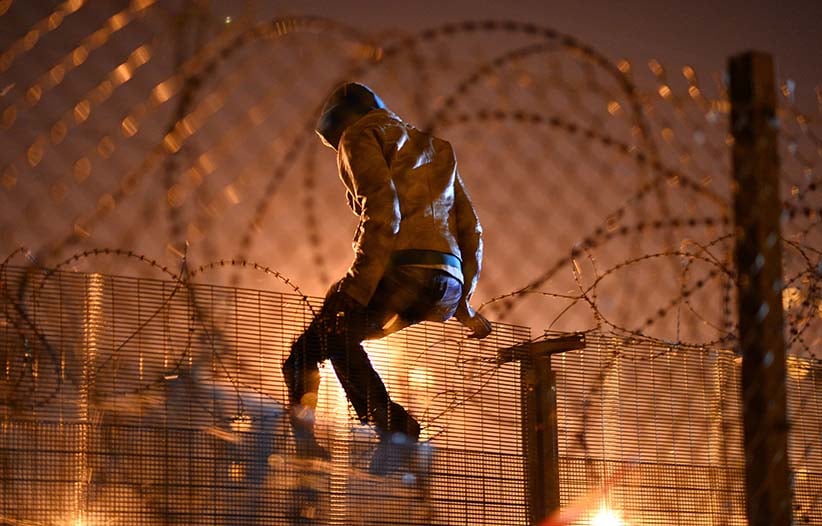 A migrants camped out in Calais, attempts to climb a security fence near refugee camp of Calais, France on August 3, 2015. (Mustafa Yalcin/Anadolu Agency/Getty Images)

Local officials announced the destruction of the camp, where thousands fleeing war and poverty have lived in squalor as they waited for a chance to sneak across the English Channel into Britain. Migrants are being moved to reception centres around France where they can seek asylum.

“There are no more migrants in the camp,” said Fabienne Buccio, a local official in the camp. “Our mission has been fulfilled.”

Migrants were seen milling around after despite the announcement, but authorities said they would stop processing people by Wednesday evening.

Migrants have flocked to the Calais region for decades, but the camp has grown as Europe’s migrant crisis expanded. As it evolved into a massive slum supported by aid groups, France finally decided to shut it down.

As the reality of the mass evacuation took hold, fearful migrants from Afghanistan, Sudan, Eritrea, Syria and Pakistan braced for a new reality. Some pledged to just keep moving.

“This jungle is no good,” said Muhammad Afridi, 20, from Pakistan. “We go to a new jungle.”

The main alley through the camp near the city of Calais burned overnight, leaving skeleton-like hulks on either side of the road. Firefighters delved into the camp’s deepest recesses, trying to prevent a massive conflagration.

Gas canisters popped as they exploded in the heat. One aid group’s truck burst into flames.

Migrants stood and watched. Some laughed.

Steve Barbet, a spokesman for the regional authorities, said one migrant was hospitalized. About 100 migrants were evacuated.

The camp once housed 6,300 migrants, according to authorities, but aid groups said the number was much higher.