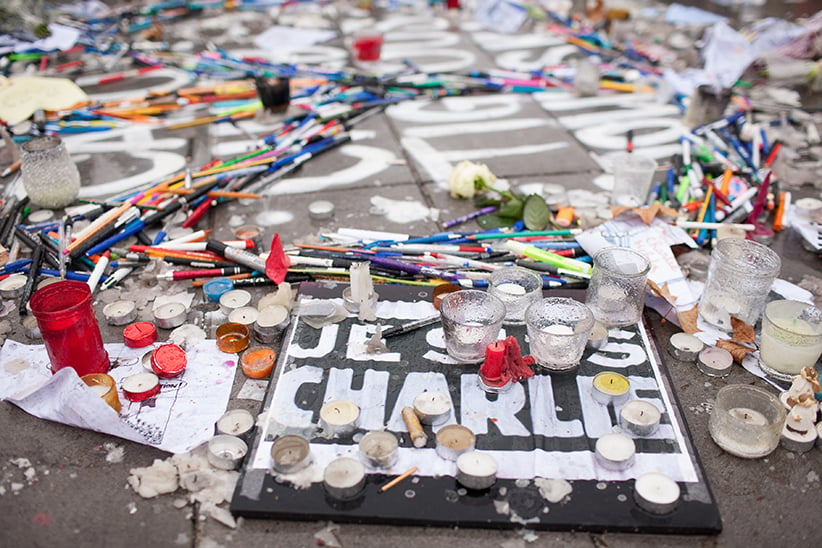 PARIS — French President Francois Hollande has honoured 17 victims killed in Islamic extremist attacks on satirical newspaper Charlie Hebdo, a kosher market and police a year ago this week, unveiling plaques around Paris marking violence that ushered in a tumultuous year.

Tuesday’s ceremonies come as Charlie Hebdo is releasing a special anniversary issue laced with obscene and offensive cartoons, its surviving artists and columnists vaunting their freedom to lampoon everyone from Muslim fundamentalists to children, politicians and Catholic priests.

Victims’ families joined Hollande and other dignitaries near the building where Charlie Hebdo staff were holding an editorial meeting when two heavily armed brothers stormed in on Jan. 7, 2015, killing 11 people. The plaque begins: “To the memory of victims of the terrorist attack against freedom of expression.” 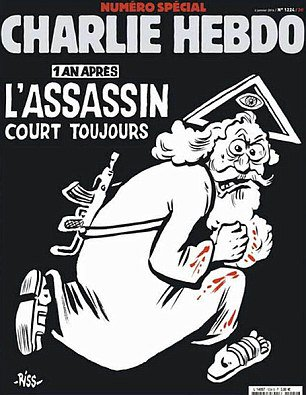 They then paid homage to a police officer killed as he tried to chase down the fleeing gunmen. Spray painted on the sidewalk was a message of support for the Muslim officer, reading “Je suis Ahmed,” or “I am Ahmed,” in the red, white and blue of the French flag.

After the attacks, people around the world embraced the expression “Je suis Charlie” to express solidarity with the slain journalists, targeted for the paper’s caricatures of the Prophet Muhammad.

Hollande then paid homage to four people killed at a kosher supermarket in an attack that revived concerns about anti-Semitism in the country with Europe’s largest Jewish community.

The French president briefly met with some of the survivors of the attack inside the supermarket.

The Charlie Hebdo memorial plaque was hastily covered up after authorities discovered a spelling error in the name of slain cartoonist Georges Wolinski. The black covering was later removed, and a new plaque is being prepared after the embarrassing incident.

Hollande will unveil another plaque on Saturday to honour police officer Clarissa Jean-Philippe, who was killed in the southern Paris suburb of Montrouge by one of the attackers on Jan. 8.

The widow of a bodyguard killed at Charlie Hebdo said on RTL radio Tuesday that she wants an investigation into security measures at the paper. Ingrid Brinsolaro said her husband “saw dysfunctions” and a lack of security in the office and “it was impossible to do his job correctly in these conditions.”

Wolinski’s widow told France Info radio she “gets more and more angry” at security gaps. Marise Wolinski said the entrance of the office should have been “bunkerized.”

Interior Minister Bernard Cazeneuve said he was open to the idea of an investigation, but also defended the government’s efforts to ensure security. Also speaking on RTL radio, he said authorities have dismantled 18 recruitment networks and arrested 11 groups planning attacks, and thwarted six attacks since last spring.

The country remains under a state of emergency after the Nov. 13 attacks in Paris that killed 130 people, and extra security was on hand for Tuesday’s commemorations.