Italian MP Licia Ronzulli, was heralded by mommy bloggers before, and after her ties to Berlusconi were revealed 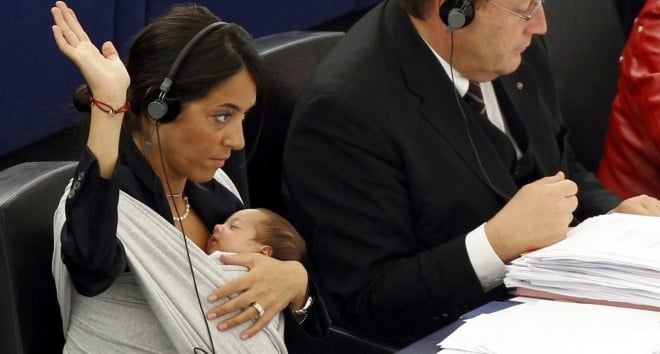 Photos of Licia Ronzulli voting at the European parliament with daughter Vittoria in her lap have elicited a chorus of “aww”s among feminist and progressive mommy bloggers. The images “normalize and empower at the same time,” says Avital Norman Nathman, author of the American blog Mamafesto. But will they still consider Ronzulli a heroic symbol of working motherhood even after they learn of the Italian MP’s close and allegedly shady ties to notorious womanizer and former prime minister, Silvio Berlusconi? After all, Ronzulli has vacationed numerous times at the Italian tycoon’s Villa Certosa, his opulent summer home that features both an amphitheatre and a remote-controlled waterfall—and was a popular venue for his infamous parties.  Turns out, yes, they will.

Ronzulli first brought Vittoria into parliamentary chambers on September 22, 2010, when she was just 44-days-old. The newborn slept peacefully in a sling while her mother voted on improving the rights of working women. Andie Fox, writer of the Australian blog Blue Milk, likes how Ronzulli challenges the stereotype of the “earthy” attachment parenting mother. “Just goes to show you can get a lot done with your baby strapped to you!”

While Ronzulli’s initial intention was not to make a political statement, as she explained to the Associated Free Press in this video, “It’s become a fight to help all mothers around the world, all women who shouldn’t find themselves faced with the choice between their work and their family.” Her words actually echo the title of Chiara Valentini’s new book, O i figli o il lavoro (“Either children or work”), which details how mothers have a harder time working in Italy than anywhere else in Europe.

The latest Italian census showed that more than 800,000 women born after 1973 have been fired or forced to quit their jobs after becoming mothers. This is partly due to the so-called dimissioni in bianco—a discriminatory hiring practice in which new workers sign undated resignations that can be invoked once women get pregnant, thus conveniently releasing their employers from having to abide by Italy’s generous maternity-leave policies.

One of Berlusconi’s first acts upon returning to power in 2008 was to overturn a ban on the dimissioni in bianco that had been passed by the previous centre-left government. So the fact that one of his papi girls, as the women he favours are called, is now the poster woman for the movement against such discrimination is rather rich in irony.

Berlusconi was a witness at the wedding of Milan native Ronzulli and her husband Renato Cerioli, who are both members of his People of Freedom party (PDL). Before turning to politics, Ronzulli worked as a hospital manager and a children’s aid volunteer in Bangladesh. She won a seat in the European parliament in 2009.

In June 2009, Barbara Montereale, who claims Berlusconi paid her $15,800 to attend one of his “Bunga Bunga” sex parties, told reporters that Ronzulli was the one who organized her visit to Villa Certosa in Sardinia the previous January. “She was like a secretary. She would say, Barbara you go in that room, to another girl, we’ll put you in that room,” Montereale told the Times of London. Ronzulli immediately issued a statement denying her involvement: “I wish to clarify that many times, on vacation, I have been a guest at Villa Certosa with my husband and I helped Presidente Berlusconi welcome guests: politicians, entrepreneurs, friends.”

But the feminist mommy bloggers don’t seem to care either way. “I’m reluctant to judge her without knowing the details,” says Fox. “I think all of us are compromised to varying degrees at times to get ahead in our jobs and we all make decisions or choices that we don’t feel great about.” Norman Nathman is similarly willing to turn a blind eye: “The reality is that not everyone is everything we’d like for them to be. So I think you can applaud the action, or in this case the photo, and the message behind that without promoting or agreeing with other parts of their policies.”

Francesca Caferri, co-founder of the nascent Se non ora quando? feminist movement in Italy, echoes the sentiments of her Anglo-Saxon counterparts: “Certainly Berlusconi has really hurt Italian women, so those who support him are not viewed well, but when it comes to reconciling work and motherhood, it doesn’t matter if you’re on the right or the left.”