Philly on Trump: From founding fathers to floundering frother

An unhappy July 4? Talking to Americans about Trump—and the sad state of U.S. politics—in the city of Ben Franklin Vistitors to Independence National Park take photos of the Liberty Bell on Friday, July 4, 2014, through a window from outside as the pavilion was closed briefly for an annual ceremony with descendants of signers of the Declaration of Independence. (AP Photo/The Philadelphia Inquirer, Tom Gralish)

Twelve score and zero years ago—July 4, 1776, to be exact—a suicidal parliament of Southern slaveholders and Northern one-percenters emerged from a non-air-conditioned conference room in Philadelphia and declared war on the British king in the name of equality, happiness and liberty, at least for themselves.

What happened next—five years of skirmishes and reciprocal slaughter and a huge helping hand from the French—ended with the surrender of Lord Cornwallis at Yorktown, Virginia, and victory for the insurgents. Then the same white men marched back into the same room in downtown Philly to try to figure out what to do with their 13 newly ex-colonial colonies.

“Well, doctor, what have you given us?” a woman asked Benjamin Franklin—probably the most famous man in the Western world at that time—when this second conclave finally concluded in 1787 with a six-page constitution. “A monarchy or a republic?” 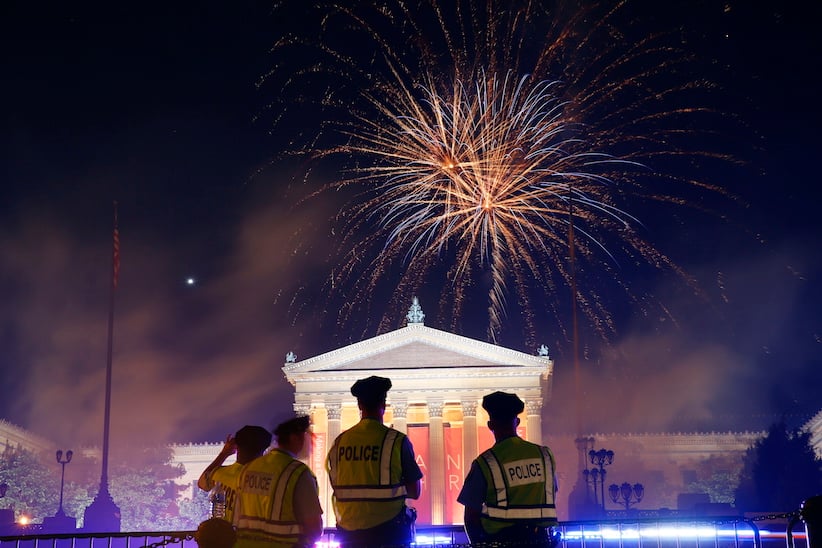 Fireworks explode over the Philadelphia Museum of Art during an Independence Day celebration, Friday, July 4, 2014, in Philadelphia. (AP Photo/Matt Rourke)

Flash ahead to the 240th anniversary of the first Fourth of July, and 330 million Americans are pondering the same question as they stock up on low-carb beer, high-calibre ammunition, Roman candles and legal marijuana (in a couple of states and Washington, D.C.) for the holiday. With the incendiary Donald Trump poised to receive the Republican presidential nomination in Cleveland on July 21—barring a second American revolution among his own pledged delegates—and with Hillary Clinton due in Philadelphia a week after that to accept the Democratic nod for her family’s third term, a reporter comes to the City of Brotherly Love and finds very little of it, especially as far as Trump is concerned.

“How do you think Ben Franklin would react to Donald Trump?” a clerk named Cindy is asked at Franklin’s reconstructed 18th-century post office, a block from Independence Hall, where the rebels’ defiant declaration was written.

“He had the right to bear arms,” she replies. “So he would probably shoot him.”

“He couldn’t be more unqualified if he fell on his head,” Franklin’s successor elaborates. “The comments that come out of his butt are so offensive, so oppressive, and so uncaring, he would be such an embarrassment.

“I don’t think the Founding Fathers could have handled someone so small-minded. These were intelligent men. The world can’t survive Trump, because Trump is a fool. Trump’s an idiot. Electing him would be like sending an astronaut to the moon with no training.”

“How do you think Ben Franklin would react to Donald Trump?” an agent named Christina is asked at the Big Bus Tour booking desk.

“He would have shot him,” Christina says.

“How do you think Ben Franklin would react to Donald Trump?” a staffer named Cathryn is asked at the information desk in the Liberty Bell visitor centre.

“He would run intellectual circles around him, that’s for sure,” she answers, “but he would approve of Trump’s lascivious nature!” 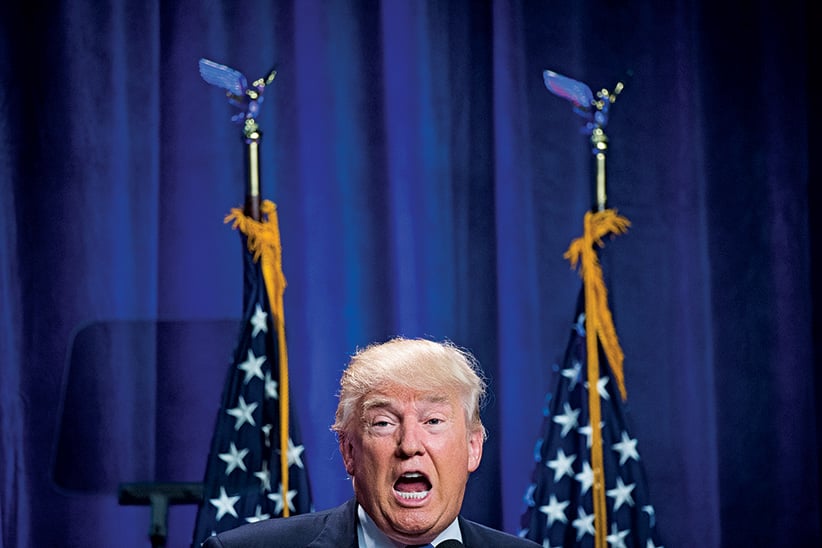 “Many a man’s own Tongue gives evidence against his Understanding,” said Benjamin Franklin, 12 score years ago, presaging the Donald’s oft-fallacious bluster.

It is a defining fixture of American politics and culture that the Founding Fathers of 1776 retain their deific lustre, be it in the production of Hamilton on Broadway, in countless small-town parades and pageants on the Glorious Fourth, or in Philadelphia, where a tourist can “sneak” into Independence Hall after hours with John Adams and George Washington, crawl the city’s pubs with the bibulous and ubiquitous Franklin, or debate the finer points of representative democracy with Thomas Jefferson.

The founders’ parchment Constitution, which has been amended only 27 times in 229 years, still is microscopically dissected in every courthouse and legislature in the land as public servants attempt to regulate the digital affairs of the 21st century according to the tenets of long-dead squires who wrote with the quills of geese.

“They have become archetypes for their ideas, but there’s a core truth to those archetypes,” says Thomas Donnelly, senior fellow at the National Constitution Center, a block from Independence Hall. “It is important to remember that the Founding Fathers risked their lives for an idea. It is important not to sanitize that sacrifice.”

Enter, then, Trump, the Floundering Frother of 2016. With his annunciation less than three weeks away, the Donald finds himself adrift on a sea of troubles, not the least of which is the eagerness with which prominent Republicans are making excuses not to attend their own party’s party. The latest tally of RSVPs to Trump’s Ohio event includes: 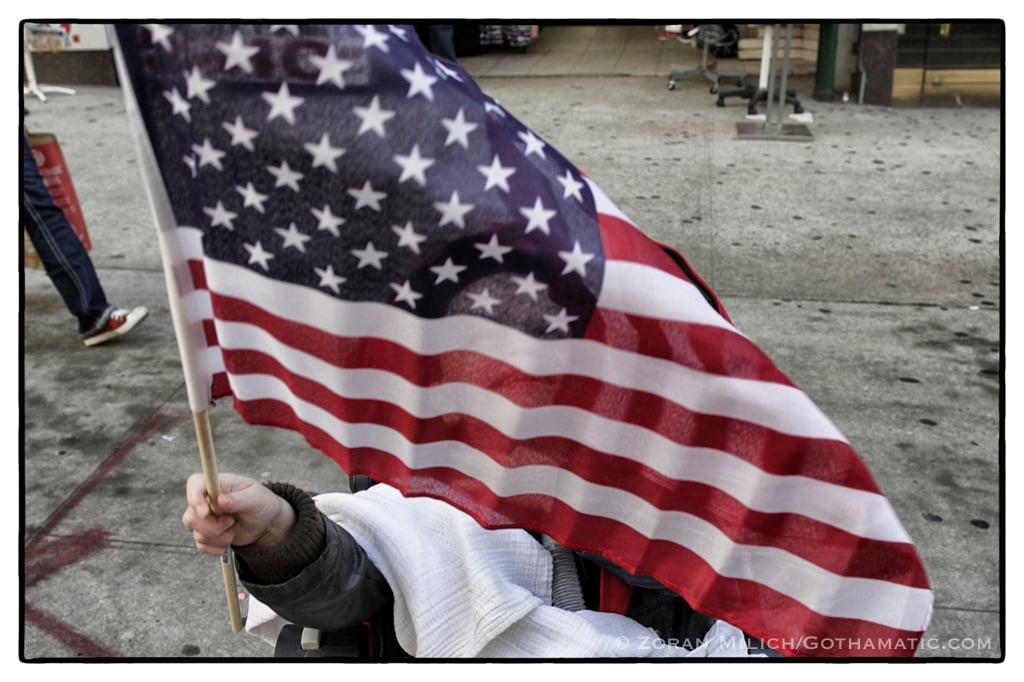 “Keep your eyes wide open before marriage; half shut afterwards,” Ben Franklin advised the swains of his generation. In 2016, obeying Poor Richard’s prescription, nearly every Republican governor, big-city mayor and member of Congress is faking not only blindness, but deafness to Trump’s bombastic rants as well.

Meanwhile, in the Forest City this week, the National Lawyers Guild complained formally to the FBI and the Secret Service that law-enforcement agents have been knocking “on scores of doors at the homes and workplaces of community members, activists and organizers . . . please be aware that the communities in Cleveland you are targeting are uninterested in assisting in your fishing expedition.” A judge ruled that the city’s plan to keep protesters out of the downtown core during the convention violates the Founding Fathers’ protection of freedom of speech, and the Coalition to Stop Trump vowed to hold “the kind of protest that people can bring their families to.”

Also in Cleveland, the American Civil Liberties Union has released a “constitutional playbook” for the clashes to come:

Can police lie to infiltrate an organization?

If a demonstrator “goes limp” in police custody, is that resisting arrest?

Can police use force to disperse a protest?

Philadelphia, not to be outdone, is preparing the gymnasium of the 19th-century Holmesburg Prison—infamous as the dungeon in which psycho-pharmaceuticals and even chemical weapons once were tested on inmates—to bivouac protesters, should they overflow the city’s other jails. But the city council has moved to decriminalize such minor offences as “blocking traffic” and “failure to disperse,” and Mayor Jim Kenney told a press conference in Washington, “What’s the sense of having a democracy if you can’t say what you think and protest when you want to?”

It is a question that Ben Franklin himself might have asked, 240 Fourths ago. As always in July, the Founding Fathers are on everyone’s mind.

“We are a republic and the founders were very nervous of pure democracy,” Mitt Romney said at a conference Aspen, Colo., this week. “John Adams wrote famously that every democracy commits suicide. Every democracy kills itself.”

Any constitutional republic, Benjamin Franklin predicted in 1787, “Can only end in despotism, when the people shall become so corrupted as to need despotic government, being incapable of any other.”

To many Americans, never since the Civil War has the republic been so existentially threatened, not only by a billionaire gold-bricker but by his little-loved rival as well.

“Is Hillary honest? I don’t know,” shrugs Cindy at the Ben Franklin P.O. “After hearing about her email controversy, it kind of gives her a black eye as far as her character is concerned.”

“When I speak of the candidates, the tourists all say, ‘Ugh! Those two people!’ ” laughs David Cross, a former criminal-defence attorney who guides tour groups along Philadelphia’s history-soaked sidewalks in his trademark star-spangled bow tie.

“How do you think Ben Franklin would react to Donald Trump?” Cross is asked.

“He would be more horrified by Clinton than by Trump,” is his answer. “What would have upset him was the idea of someone becoming rich by being a politician. Trump got rich by being a businessman, but she got rich from politics.”

The tour guide surveys the modern landscape of the city where it all began and predicts a summer of clamour, calumny and anger.

“There’s a reason that I have time-travelled to the year 1787,” says Bow Tie Guy. “I’m much more comfortable there.”