From the sword to the pen: Terrorist recruiters turn to magazines 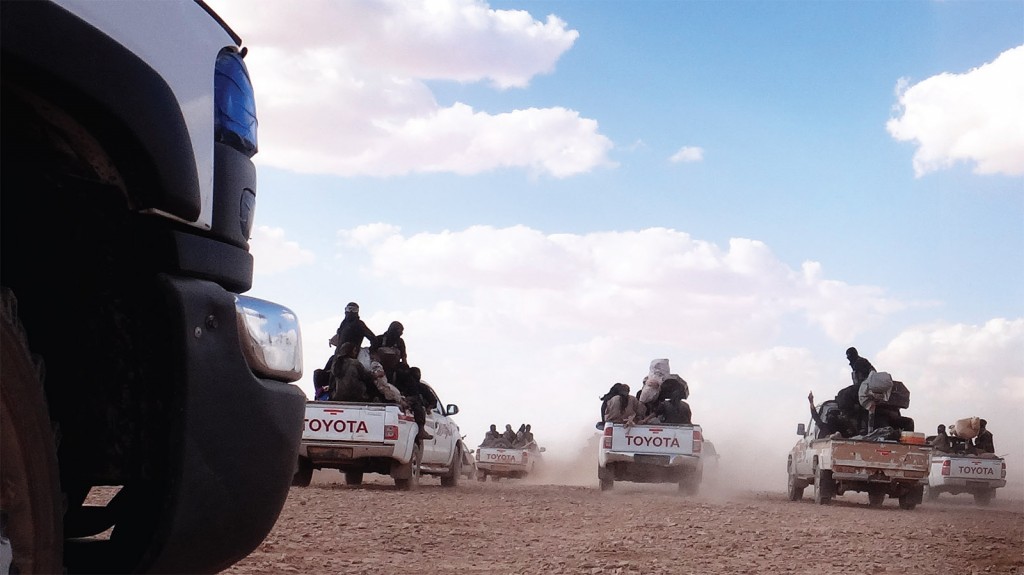 An image from Dabiq’s third issue.

The first public confirmation of the death of Mohammed Emwazi, a Kuwaiti-born British citizen, came in a Jan. 18 obituary that few Westerners would have seen. It lauded him as an “honourable brother” known for his “mercy and generosity,” who had escaped the “much-overrated MI5 British intelligence agency” to Syria. To his detractors, Emwazi was “Jihadi John,” the infamous knife-wielding militant featured in Islamic State’s graphic execution videos of James Foley, Steven Sotloff, David Haines and Alan Henning. The fawning tribute appeared not in an Internet video diatribe but rather in Dabiq, Islamic State’s slickly produced English-language magazine.

In an effort to recruit militants from Western countries, ISIS has turned publisher. It publishes propaganda materials in multiple languages online—English, French, Russian, you name it—and has media bureaus in its Syrian and Iraqi territories. Dabiq is a reference to an apocalypse, the final war between Islam and Christianity. (Dabiq is also a Syrian town 40 km from Aleppo.) Rival organization al-Qaeda has had its own online English-language magazine, Inspire, for several years now.

Despite seemingly similar goals, the two publications are different in terms of content. Dabiq is more aggressive in its push to convert readers to followers, and in its drive to establish an Islamic caliphate. There are currently 13 issues, and a new issue comes out every two months or so, glorifying atrocities committed by ISIS. Prominent ISIS-affiliated social media accounts share the links. Inspire too is easily downloaded and shared. It invokes 9/11 for inspiration to potential jihadis, with lessons in bomb-making. The two magazines provide a fascinating glimpse into the ethos and ground-level strategies of two competing organizations that are succeeding in drawing converts to their message of terrorism. 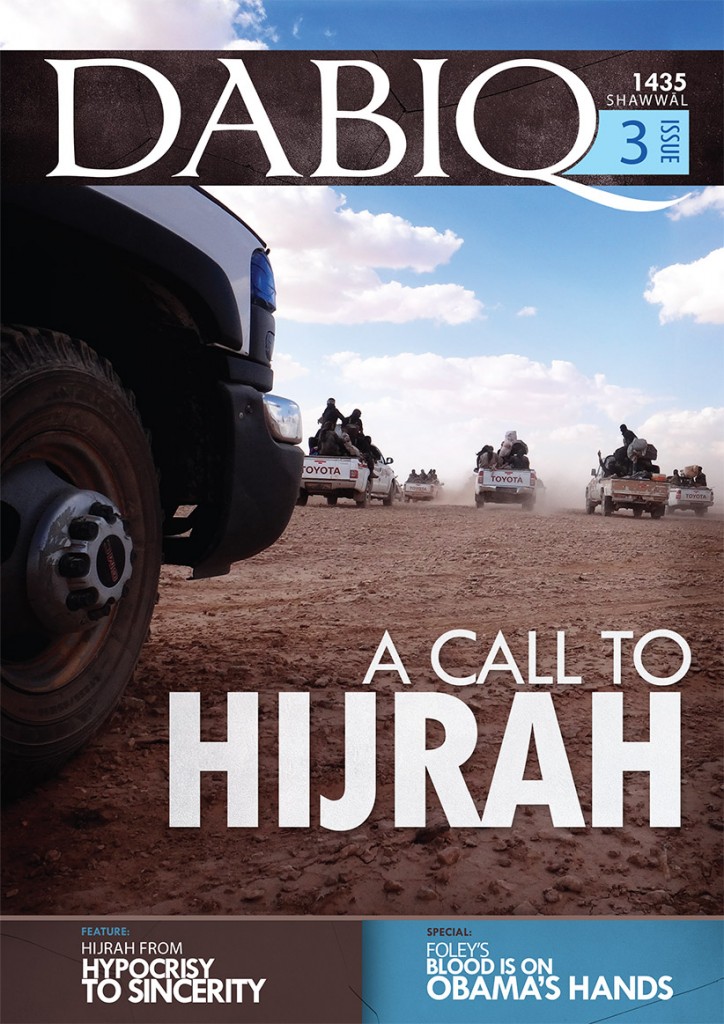 Shiraz Maher, a senior fellow at the International Centre for the Study of Radicalisation at King’s College London, says Dabiq has been a successful recruitment tool in ISIS’s arsenal: “Dabiq is one part of Islamic State’s attempt to recruit Muslims in the West by offering snapshots and insights about life inside their caliphate. It also allows the group to explain itself, either by offering a rationale for its activities or by boasting of past attacks such as those in Paris last November.”

The articles in Dabiq are often long-form essays, filled with repetitive religious quotations from the Quran or quotations from high-ranking ISIS officials. The essays usually call for Muslims to come to ISIS territory. The most recent issue had an editorial glorifying the husband-and-wife attack in San Bernardino, Calif., that saw 14 murdered, and encouraged other couples to “strike the crusaders in their own lands.” Unfailingly, there are articles about how the West has destroyed and humiliated the Muslim people now and in the past, and references to the betrayal of the 1916 Sykes-Picot Agreement abound. Obsessively rehashed reinterpretations of ancient history—Quranic battles, the Crusades, etc.—are related to news events in the Middle East. The aim is to establish that history is on the side of ISIS, and that its mujahedeen are merely seizing their destiny as prophesied. 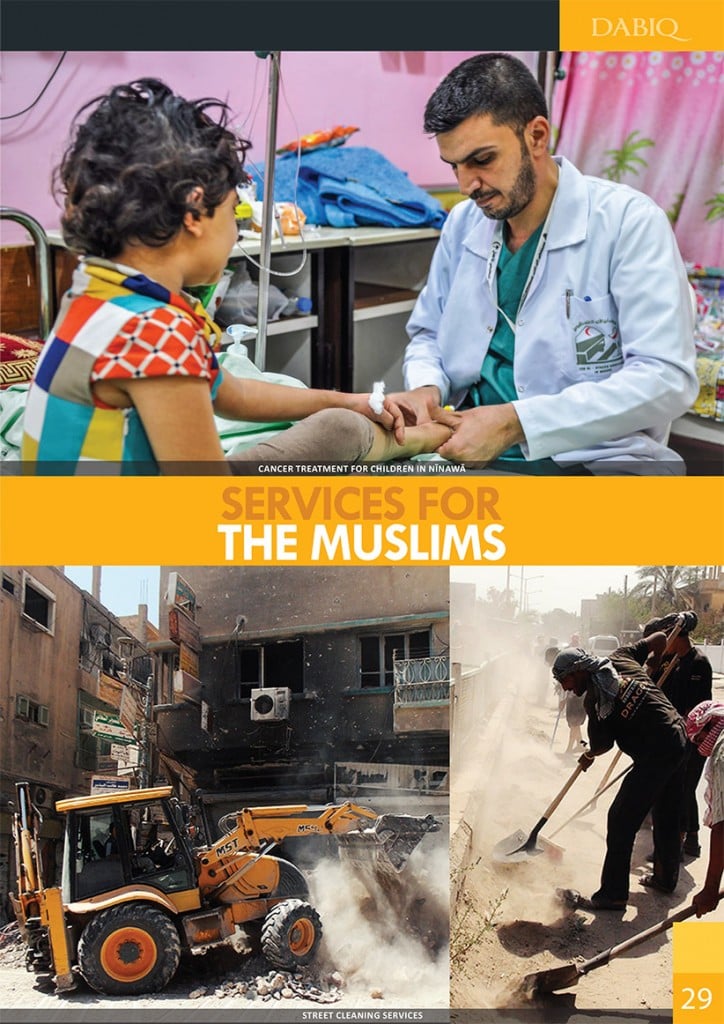 To better build that nation, Dabiq ran an ad in the launch issue asking for doctors and engineers to come to Islamic State. Multiple articles in each issue detail how ISIS “helps orphans” and “empowers local communities.” There are photos of cheerful ISIS officials handing out food to the needy. By the third issue, published in late summer of 2014, there was a section with information explaining how to get in touch with the editorial team. The editors were looking for feedback, and ways to engage with potential recruits abroad. The stories in Dabiq repeatedly state that Islamic State is a real nation and a dangerous military power. There is an editorial awareness that Western intelligence agencies could be reading the magazine, and so articles boasting of military victories are often accompanied by pictures of their victims.

Initially, the photos were graphic enough to upset a non-partisan reader, but not so graphic that they might upset a potential fresh recruit. That’s changed, with the addition of screenshots of executions from ISIS videos. Recent issues are more strident in asserting that dissenters (including Muslims) best not criticize ISIS rule, or they too will suffer a terrible fate.

Some of Dabiq’s content is aimed at the more religiously educated Muslim population. There is even an occasional section written by women for women, encouraging Muslim sisters to emigrate to the caliphate, with references to the work and “equal opportunity” available to them. 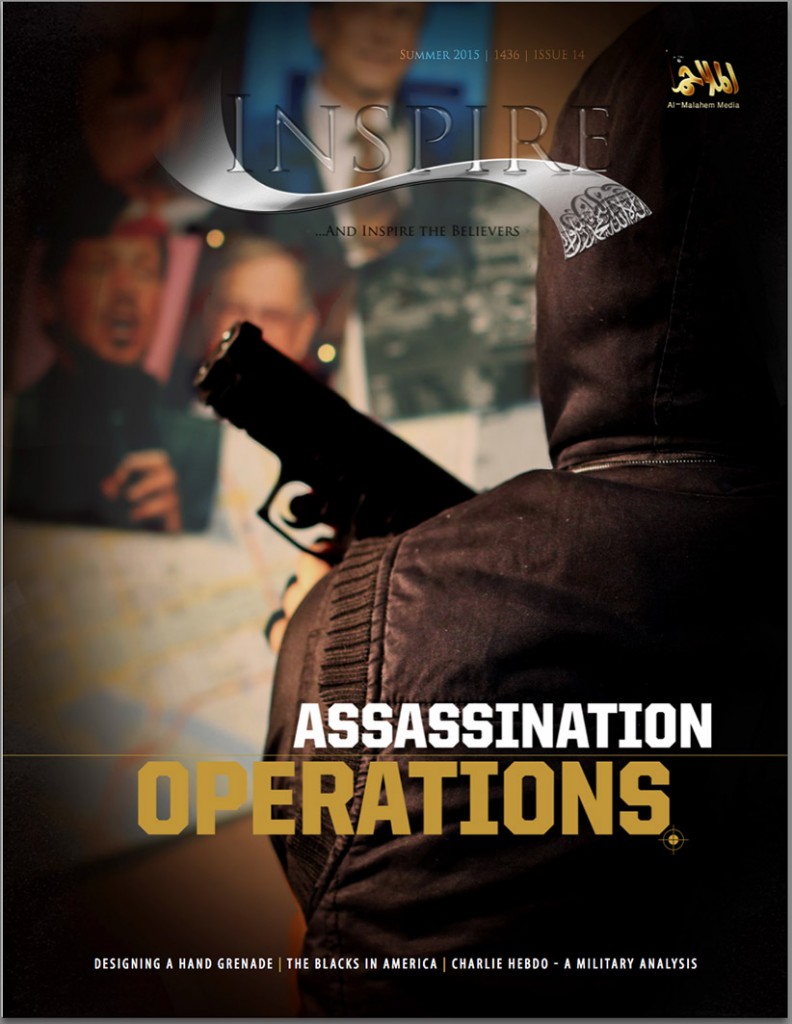 In comparison, al-Qaeda’s magazine, Inspire, relies less on stories and more heavily on images, and the photos tend to be pictures from 9/11—usually photos of smoke engulfing lower Manhattan or the airline hitting the first tower—or photos of al-Qaeda “martyrs,” rather than its maimed enemies. There are punchier headlines, such as, “What do breakfasts have to do with airplanes?”

Inspire keenly documents what it refers to as “those in the West” are saying about al-Qaeda. Every issue features excerpts of legitimate news outlets discussing al-Qaeda, criticizing Western regimes, or Inspire magazine itself. In the 12th issue, a quote is pulled from the Times of Israel describing content in Inspire: “The issue features tweets from ‘the mujahadeen in the Arabian Peninsula’ celebrating the bombings and includes a section lauding the Oklahoma tornadoes.” Photos of Noam Chomsky appear often and he is quoted on Western involvement in the Middle East or on the treatment of Muslims in the West. Again, in the 12th issue, a quote attributed to Chomsky—“To some degree it matters who’s in ofﬁce, but it matters how much pressure they’re under from the public” appears in a section entitled: “Echoes behind enemy lines.” Al-Qaeda editors want readers to know its mission is not exclusive to Muslims, and their promotion of a global “revolution” through a veneer of intellectual conversation is one way to do that.

Inspire remains focused on a strategy that worked for al-Qaeda in the early 2000s: targeting civilian planes. There are graphics that ridicule the Transportation Security Administration, and one includes a chilling statistic, accurate or not, that while 95 per cent of all plots are thwarted, five per cent are not. The editorial team at Inspire encourages its readers to challenge those odds. As al-Qaeda does not recognize the caliphate established by ISIS, there are no calls to come and establish a utopian Islamic society. Rather, there is encouragement for violence wherever a reader might be.

Discussion of jihad, of course, is more than talk. It is simultaneously an incitement to commit terror, an education in how to do it and a permanent electronic record of the sufferings of the targets of terror. In the new era of social media, the Internet is literally another battleground. Rafi Green, director of the Middle East Media Research Institute’s Jihad and Terrorism Threat Monitor, proposes making it harder for jihadis to use hosting websites, and to hold social media sites accountable for materials they post and share. “This is not a matter of free speech, but life and death, since these magazines openly call for people to go out and kill other people. The longer something is online, the more harm it does. The possible harm and damage to society outweighs the possible benefit to intelligence in this case.”

The idea of closer supervision of online terrorist materials is jarring. Yet there are long-established legal rules that the right to free speech does not include the right to incite crime. Incitement, however, is exactly what Islamic State and al-Qaeda seek to do in their online communications­—and not everyone in the West is immune to their calls.