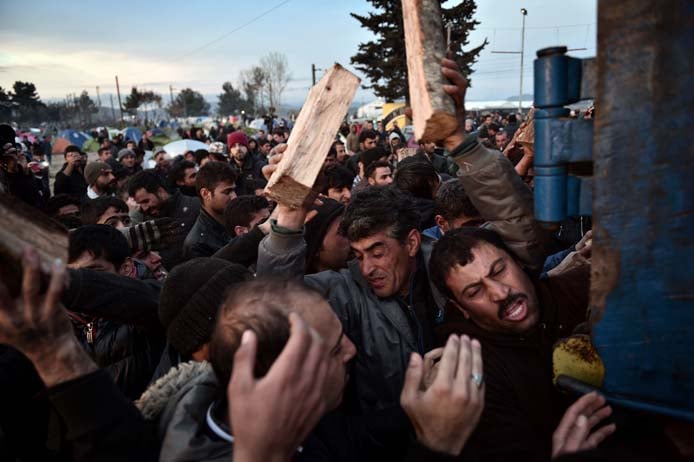 People rush to get firewood in a makeshift camp of the Greek-Macedonian border near the Greek village of Idomeni on March 6, 2016, where thousands of refugees and migrants wait to cross the border into Macedonia.(Louisa Gouliamaki/AFP/Getty Images)

Has Europe suddenly turned heartless? Or is it just waking up to the reality that it has failed to collectively manage this drama?

“It is not sustainable anymore that no one’s playing a common game,” said Yves Pascouau, a migration expert at the European Policy Center. “We need to fix this and really need to move ahead.”

But not all Europeans see this as a problem they must share. Worried about their own weak economies, concerned that their national values are eroding, many say war in the Middle East and poverty in Africa are someone else’s responsibility.

Compassion had the upper hand just six months ago, as the number of Syrian refugees soared and the photo of a dead 3-year-old on a Turkish beach galvanized volunteers. Border guards greeted weary travellers with a hearty “Welcome to Germany,” and Chancellor Angela Merkel inspired other nations to do the same. Players on the Munich field promoted integration, holding hands with a refugee child on one side and a German child on the other.

Then, the refugees kept coming, along with economic migrants from Senegal, people fleeing repression in Sudan, and many, many others. Amid the swelling tide was a handful of violent extremists, who found common cause with angry young men whose families arrived a generation earlier.

Paris was attacked. Women were assaulted in Cologne. Attitudes shifted, creating a turning point in the crisis that has dominated Europe for the past year and will define its immediate future.

Now, resentment of the open-arms approach is driving support for a German nationalist party that made gains Sunday in three state elections. On the margins, extreme anti-immigrant youth in the French port of Calais torched tires and blocked migrants from the centre of town this weekend, decrying a “veritable invasion.” Sweden, which has taken in more migrants per capita than any other country, has suffered a spate of arson attacks on asylum centres and other sites.

“Europe is at a critical crossroads,” said Prime Minister Alexis Tsipras of Greece, the first stop for migrants braving the sea crossing from Turkey. Extreme right forces, he said, “are the real threat for Europe now.”

Governments are cracking down, too. The route hundreds of thousands of migrants have taken through the Balkans effectively closed over the past few days, one nation after another shut its borders. Some 42,000 people are now stranded in overwhelmed, debt-weakened Greece, including 14,000 desperate souls languishing in a fetid field in the border town of Idomeni.

Some European leaders consider the unilateral border closures to be a threat to a continent meant to be borderless and based on consensus. But proponents say it’s the only way to show migrants with little chance of winning asylum that smugglers are peddling a false dream of easy prosperity in Europe.

Even Merkel now makes clear that she doesn’t plan a repeat of last September’s move to let in the migrants who had piled up in Hungary.

She still insists on a Europe-wide solution that addresses the causes of this massive migration. But her government has been tightening controls—declaring that several Balkan nations and North African nations are safe countries of origin, making their citizens ineligible for asylum—as it tries to reduce the influx of migrants who have little chance of winning permission to stay.

Deterring those migrants is central to the complex EU migration plan being worked out this coming week. The idea is for Europe to send back to Turkey anyone from any country who doesn’t qualify for asylum or has tried to evade the rigorous asylum application process. For every person sent back, EU countries would take in one confirmed Syrian war refugee.

“The policy of waving (people) through is over,” German Interior Minister Thomas de Maiziere told ZDF television Thursday. “We want to reach solutions. And a solution is that we end these illegal ways to Europe, and so break the business model of the criminal smugglers.”

The coming warm season may provide answers. With the Balkans route closed, others may emerge—and an even more dangerous journey from lawless Libya across the Mediterranean to Italy may offer renewed promise.