Colby Cosh on why Germany is the new favourite team 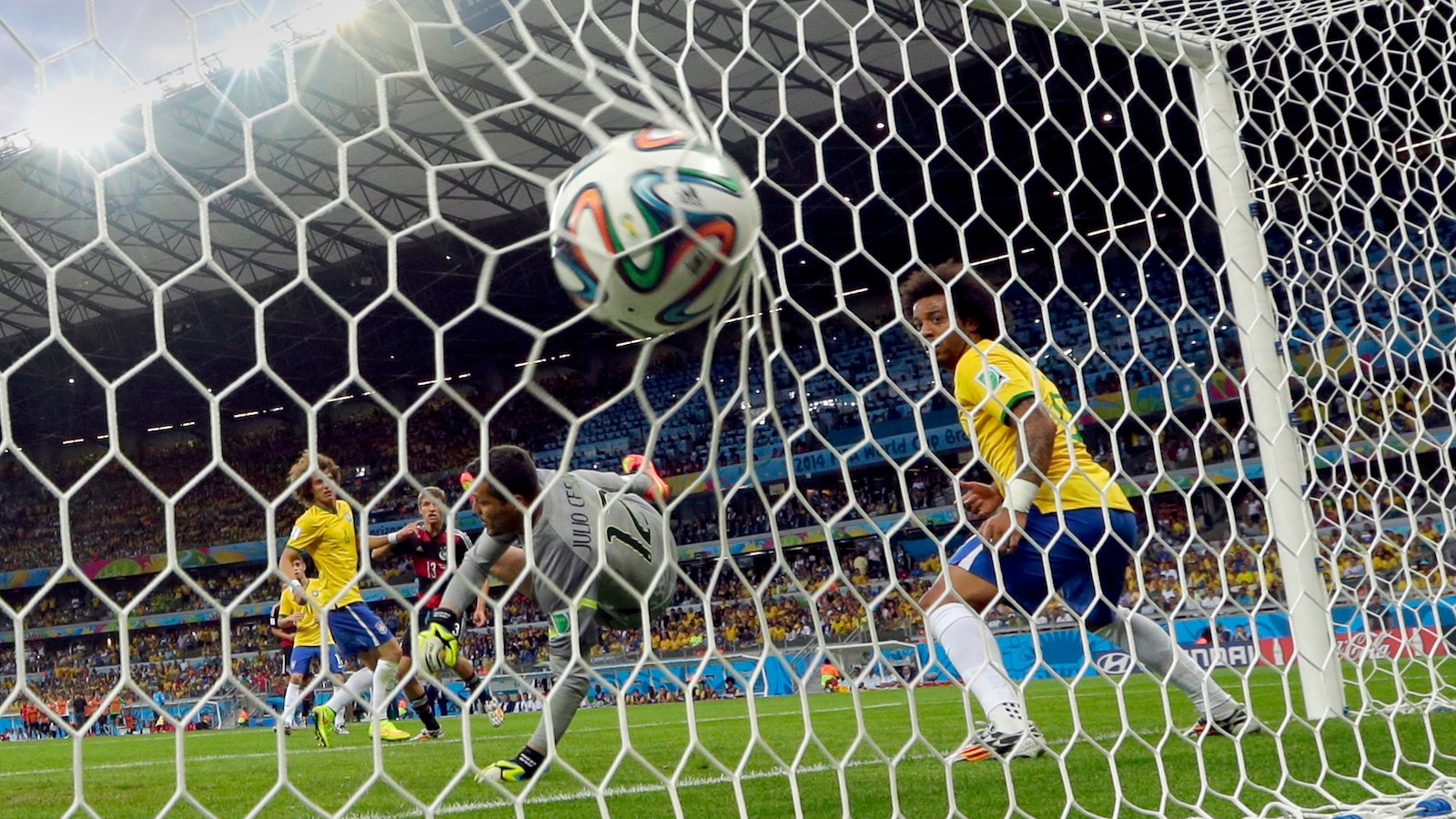 It’s already being called “The Mineiraço”. Yesterday’s 7-1 slaughter of Brazil by Germany in the semifinals of the World Cup seemed an awful lot like a historical turning point, and the political ripples are already being discussed. Perhaps they are not even confined to Brazil, although the recriminations there are bound to be awesome: the government spent untold billions on a golden stage for Brazilian glory, and ended up with the sporting equivalent of the Challenger disaster, if Challenger had crashed intact into a packed stadium where the Pope was giving a homily.

What seems most remarkable to me is not the match itself but the prelude. I grew up in a colony of Anglo-Saxon Soccer World in which Germany was inevitably cast as a cartoon villain and Brazil was everybody’s second-favourite national side. Brazil were what Canada fancies itself to be in hockey: the native “speakers” of the prestige dialect of the game—a national noblesse, possessing self-conscious power to establish, dictate, and impose its ideal form on lesser breeds. (Even Canadian children who played soccer were dimly aware of this: the rich ones would signify their coolness by wearing Brazil kit to practices, as I’m sure Bulgarian youth hockey players must signify to their mates by flaunting expensive Crosbiana.)

The headlines associating Brazil with “the beautiful game” must come to tens of thousands over time, and reporters in every country have long sat still and scribbled dutifully while Pelé anointed this player or that player as worthy of his legacy. It is different now: Pelé’s obnoxiousness is openly recognized, and Brazil no longer plays particularly elegant soccer. (This World Cup has been high-scoring, and very short, by historical standards, on ugly “negative” football.)

Anglo Soccer World seemed to be very much leaning toward Germany in the run-up to the Mineiraço. No doubt this is partly because we are getting ever further from the Second World War. Germany has been mostly tame, friendly, and progressive for 70 years, the Biblical specification of a human lifetime. The length of this period is approaching the duration of the trouble to which German hyper-German-ness subjected Europe between the Battle of Sedan and the Holocaust. It is hard to see any lingering trace of the old ills of the German national character in contemporary Germany.

Indeed, the crisis of the European Union has tended to throw Germany into an ever-better light. Sometimes it is as if we are witnessing a fresh division of Europe into the ethnic hemispheres recognized in the 19th century—hedonistic “Latin” and stoic, hardworking “Teuton.” In the Anglo world Germany is increasingly considered, perhaps as much as the Nordic countries once were, to have aspects of humane capitalism quasi-permanently figured out. It is seen—we colonials still can’t help seeing these things from the vantage point of London—as paying for the European project by means of its productivity, and getting little but rudeness in return.

And yet it displays zero reluctance to go on paying! It does so cheerfully, confidently. One recalls the bitterness with which Margaret Thatcher, not so long ago, greeted German reunification. How fantastically unkind, even unnatural her reaction now must seem even to the most committed Thatcherite. If people like myself, descended from multiple generations of German-killers, can find themselves favouring a multi-ethnic, creative gang of soccer-playing Germans against the formerly soulful and inventive Brazilians, the psychic rehabilitation of Germany must have come pretty far. And no one seems to have begrudged them their blitzkreig of Belo Horizonte, not even the Brazilians themselves.