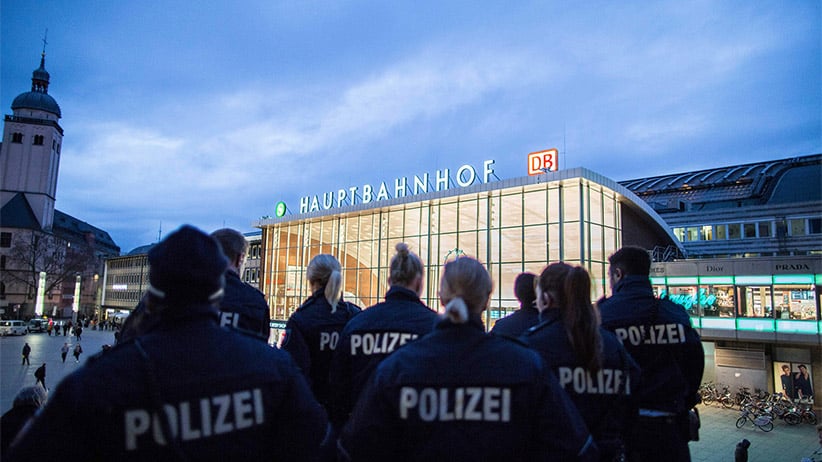 Police officers survey the area in front of the main train station and the Cathedral in Cologne, western Germany, on January 6, 2016. (MAJA HITIJ/AFP/Getty Images)

Authorities say 561 criminal complaints have been filed in connection with the assaults, with about 45 per cent involving allegations of sexual offences, and most of the suspects identified so far are foreign nationals. Many asylum-seekers who commit crimes currently avoid deportation because the danger they face in their home country is considered greater than the reason for deporting them.

“With this proposal we are significantly lowering the hurdles for the possible expulsion of foreigners who have committed crimes in Germany,” Interior Minister Thomas de Maiziere told reporters in Berlin.

The changes, which have to be approved by the Cabinet and Parliament, would mean that even a suspended prison sentence would be grounds for deportation if someone is found guilty of certain crimes. These include homicide, bodily harm, sexual assault, violent theft and serial shoplifting. Youth sentences would be covered too.

A sentence of more than one year would further increase the likelihood of deportation, de Maiziere said.

“That’s a hard but right response by the state to those who are seeking protection here, but think they can commit crimes” without consequences for their right to remain in Germany, he said.

Justice Minister Heiko Maas said that public pressure following the Cologne assaults had played a role in getting the plan agreed so quickly.

“We owe this to the victims of these serious crimes,” he said, adding that the measures were also necessary “to protect the overwhelming majority of innocent refugees in Germany. They don’t deserve to be lumped together with criminal foreigners.”

Maas said that changes also would be made to Germany’s sex crime laws to ensure that victims who are caught by surprise, or who fear greater physical harm if they resist assault, are better protected.

“This too is the kind of situation we had in Cologne, where people were confronted with a horde of men,” he said.

Police say most of the suspects in Cologne are believed to be foreigners, including at least some asylum-seekers. Many were described as being of “Arab or North African origin.”

On Tuesday they appealed for anyone with photo or video material taken that night to upload it to them so that they could evaluate it as part of their investigation.

Algeria’s prime minister, Abdelmalek Sellal, said during a visit to Berlin on Tuesday that “we as the Algerian state and people say that, if this is confirmed, it is unacceptable for us.”

Beyond the question of foreigners who commit crimes, Germany is keen to ensure that migrants who aren’t granted asylum leave the country as quickly as possible.

Chancellor Angela Merkel said she and Sellal discussed the increasing number of Algerians migrating illegally to Germany in recent months and agreed to step up police co-operation. She said that very few Algerians are granted asylum in Germany and so “in many cases, the question of sending them back is on the agenda.”

Sellal noted that the two countries have had an agreement to return Algerian nationals living illegally in Germany since 1997. He stressed, though, “that it must be proven that they are Algerians, and that can lengthen the matter.”

Separately on Tuesday, a top German police official said he doesn’t believe the New Year’s Eve assaults in Cologne and elsewhere were linked to organized crime.

Holger Muench, the head of Germany’s Federal Criminal Police Office, told RBB Inforadio that “the same conditions were in place at different locations,” with crowds of people gathering to celebrate the new year.

“I am not saying that there was no organization, but it is not organized crime,” he said. “That would have a different quality for me. We would be talking about … hierarchical groups.”

However, “what we see here is perpetrators communicating with each other and making arrangements … and of course we must recognize better where they do this, how they do this,” Muench said.