Greece: No country for young people

Many of the brightest minds in Greece are leaving the country for opportunities abroad. That will only make it harder for the economy to ever recover. 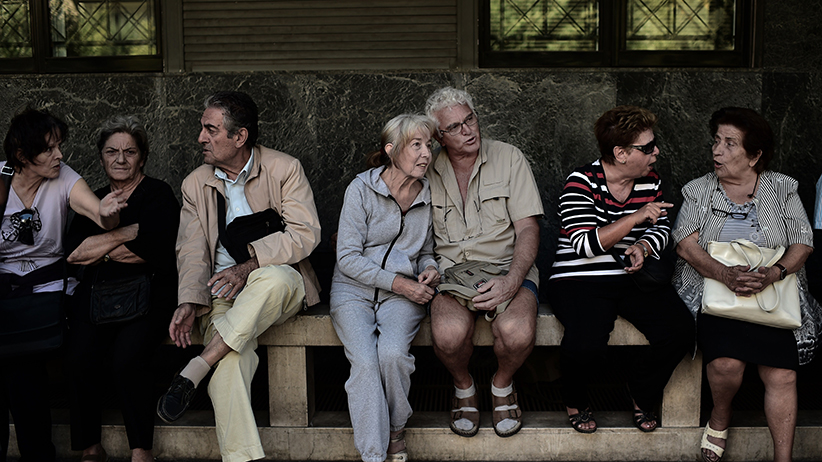 In 2007, on the eve of the global financial crisis, a protest group in Greece comprised of recent grads rallied around a symbolic number for a generation of youth: 700. Describing young Greeks as overworked, underpaid, overtaxed and debt-ridden, the group called itself “Generation 700 euros” (or G700 for short), for the average monthly wage in the Mediterranean country. (At the time, that worked out to a little more than $1,000.) After taxes, that figure fell to 600 euros (around $855), barely enough for young people to support themselves.

They weren’t alone. Across Europe, protest groups warned that youth didn’t have the resources to get ahead. In Spain, they were called the “Milleuristas,” in France, the “Generation Précaire.” But in Greece, which, in the wake of the financial crisis, became ground zero for the European debt crisis—and which once again is at the centre of debt-repayment talks that threaten to unravel the eurozone—the outlook for young people was at its most grim, and has only gotten worse.

Today, the G700 no longer exists. For one thing, many of today’s young Greeks can only dream of a paycheque that size. Since 2011, the government has shrunk the minimum wage by 32 per cent to just over 500 euros, before tax, fuelling the rise of the so-called “Generation 300 euros.”

“[The old name] started sounding like a joke after a while,” admits Thanassis Gouglas, one of the founders of the group. At the same time, several of the organizers have themselves left the country to kick-start their careers abroad. “You have a crisis where now everyone’s a loser and a victim, and it’s not just the younger generation,” says Gouglas, now a doctoral fellow at KU-Leuven Public Governance Institute in Belgium.

By now, the world is all too aware of Greece’s economic struggles. The 172-billion-euro ($244-billion) bailout, provided by the International Monetary Fund, the European Union and the European Central Bank as the debt crisis threatened to escalate in 2010, came with a set of austerity requirements designed to cut Greece’s deficit and force reforms. As a result, since the start of the crisis, the Greek economy has contracted by 25 per cent, and the country’s debt load now stands at 175 per cent of GDP.

Young Greeks have been hit particularly hard. While overall unemployment has more than doubled since the crisis began, those between 15 and 24 are twice as likely not to have work. Youth unemployment in Greece now stands at 50 per cent.

But as jobs have evaporated, many young people have simply left the country altogether. In doing so, they’ve taken crucial skills and education with them, imperilling not just the country’s recovery, but its long-term growth prospects. A study released last year by Endeavor Greece, an entrepreneurship organization, estimates that since 2008, roughly 200,000 Greeks have found jobs outside the country, with close to 60 per cent of them below the age of 35. Eurostat, the European statistical agency, says Greece has now become a net exporter of people.

Gouglas says that while the recent election of the left-wing SYRIZA government has given Greeks hope that the country’s fortunes will change, the focus has been mostly on the terms of the bailout. “The problem is that now, five years into the crisis, the dominant narrative of why Greece is in the state that it’s in has nothing to do with our narrative,” he says.

Related reading: How austerity in Greece is threatening the Eurozone again

By many accounts, that narrative is of a country that eats its young.

Nefeli Kousi is one of that group. Rather than search for a job at home, she plans to move to Switzerland in March. The 25-year-old, born and raised in Athens, is moving for a six-month internship at the CERN lab, also called the European Organization for Nuclear Research. She has already spent a year there on an internship during her bachelor’s degree in informatics and communications at the University of Athens. And while she plans to return to Greece briefly to finish her final exams and graduate in September, she hopes to stay abroad for at least the next five years. “In order to realize my potential, I think that I will have to be outside Greece,” she says. “I felt in the first two or three years of university, that I really need to go away. Because the best are gone, the good are trying to go, and if I’m left behind, I’m left behind. That’s not good.”

Eventually, Kousi would like to return to Greece to start her own company, and thinks many who are leaving feel the same. But the problems facing the country’s economy are enormous, she says, including widespread corruption and companies that abuse rules meant to increase workforce flexibility by exploiting young workers for ever-lower pay. In one case, she says, she was offered a tech-support job with a contract that explicitly said the company did not recognize any of her academic qualifications—not even her high school diploma.

Some of the biggest challenges come from a gap between how older Greeks see the future of the country, and how many young people see it. “We have this saying, ‘Get a little degree, get a little job, get a little family, get a little life,’ ” Kousi says. “On the other hand, our generation can see that this is not feasible.” And so, as more bright young Greeks leave, others wonder why they should stay.

These are some of the problems Markos Kiosseoglou, the general manager for Reload Greece, a hub for youth entrepreneurship, hopes to tackle. But he does so not in Athens, but from London, where the organization is based and where many young, well-educated Greeks have moved.

Over bougatsa, a traditional dessert of cinnamon-dusted pastry and custard, in a newly opened Greek restaurant near King’s Cross station, Kiosseoglou says his organization has grown as the diaspora of young Greeks look for ways to connect to home. “There is a trend now that young people abroad want to help their country,” he says. The group started in 2012, just as the G700 was shutting down. It brings in successful Greek entrepreneurs and provides mentors and training for those who want to start their own businesses. Few are able to find good work at home, he says, even if most—including himself—want to return. “I think ideally, everyone wants to go back,” Kiosseoglou says. “This is why we started Reload—to create the process, or the environment, that can allow us to connect to Greece and go back.”

He’s optimistic, he says, as he has watched the start-up scene mature over the last few years and local coverage of new businesses, from snail farms to ride-sharing services, explode. “The only way to solve this is to start something of your own.”

When Reload Greece first launched, Kiosseoglou says, the organization’s goal was to convince people to go back to Greece and start businesses. That advice has evolved. Now the aim is to help people start businesses abroad that can then allow them to go back, invest and provide jobs.

It’s a sentiment that Endeavor, which typically deals with more established entrepreneurs, echoes, even as it tries to raise interest in investment in Greece. “It makes no sense to force people to stay in Greece, since there are no jobs or promising prospects for them here,” says Haris Makryniotis, Endeavor’s Athens-based managing director. Instead, he says, the organization must maintain connections with Greeks abroad while trying to keep a crucial minimum of talent in the country “at all costs.”

Gouglas, for his part, says the start-up scene can produce new innovators, and hopes the new government will put strong reforms in place. But he remains skeptical that the necessary change is on the way.

After all, the story—if not the numbers—behind the G700 has not changed one bit.