Greece is running out of time—and trust

Can Greece deliver on its reform promises in exchange for financial rescue? The EU isn't so sure 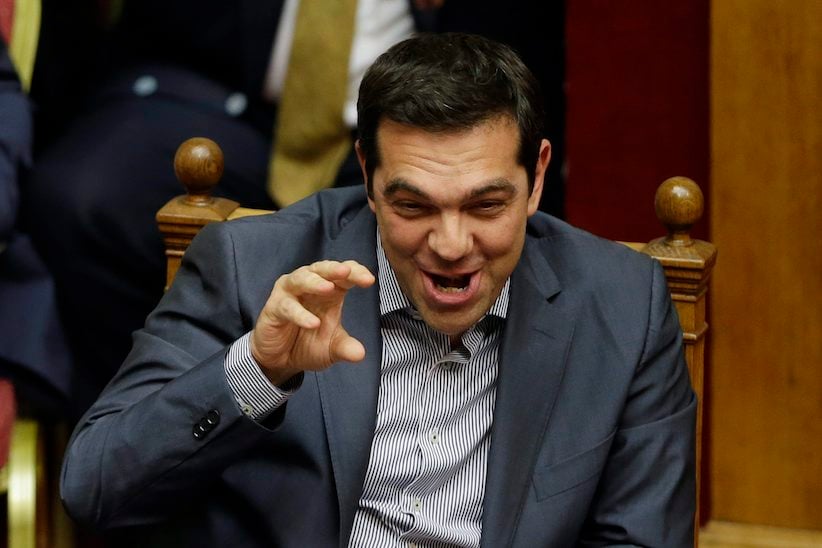 Greece’s finance minister was locked in talks with skeptical creditors Saturday, trying to persuade them that the Greek government can be trusted to deliver on its reform promises in exchange for a financial rescue securing the country’s future in the euro.

After convincing the Greek parliament in the early hours of Saturday to back a harsh austerity package to stave off financial collapse, the Greek government is facing a difficult task getting its European creditors to support its three-year bailout request. Over and over, finance ministers and top officials of the eurozone said the same thing as they arrived for a key meeting on Greece’s bailout proposals—we don’t fully trust you.

Greece, they said, needed to do a lot more than just publish a 13-page plan of reform commitments before they could sign off on another multibillion-euro bailout deal that would keep the country afloat and prevent its exit from the euro.

“We are still a long way out, both on the issue of content as on the tougher issue of trust,” Jeroen Dijsselbloem, the eurozone’s top official, said on his arrival at the meeting. “On paper it is not good enough yet—and even if it is good on paper, then we still have the question: will it really happen?”

Greece is running out of time to convince its creditors. A Sunday summit of European Union leaders could be its last chance to prevent the collapse of the banking sector and an inevitable exit from the euro currency.

Greece’s banks have been shuttered for the best part of two weeks and daily withdrawals from ATMs have been limited to a paltry 60 euros. The economy is in freefall and the country faces a raft of big debt repayments.

Early Saturday, Greek Prime Minister Alexis Tsipras cleared one hurdle. Lawmakers in the Greek parliament overwhelmingly backed a package of economic reforms and further austerity measures, in the hope that it will convince its European partners to back a third bailout of the country. Greece has made a request to Europe’s bailout fund for a 53.5 billion-euro ($59.5 billion) 3-year financial package.

Still, the measures proposed, which include changes long-demanded by creditors, such as changes to pensions and sales taxes, don’t appear to be enough, just yet. Following months of deteriorating relations, creditors are demanding firm legislative action to back up the proposals.

German Finance Minister Wolfgang Schaeuble, who has taken a hard line on Greece over recent months, said the Greek government will have to do a lot more than just say it wants to reform if it’s going to get more money.

“We will definitely not be able to rely on promises,” he said. “We are determined to not make calculations that everyone knows one cannot believe in.”

Schaeuble was clear in who he blamed for current crisis. He put that firmly on the shoulders of the radical left Syriza government that was elected in January on an anti-austerity prescription. The “hopeful” economic situation regarding Greece at the end of last year has been “destroyed by the last months,” said Schaeuble who anticipated an “extraordinarily difficult” meeting.

The German finance minister was at the centre of a report in Germany’s Frankfurter Allgemeine Sonntagszeitung that he has proposed a temporary, five-year euro exit for Greece as a way out of the crisis. However, Theodoros Mihopoulos who heads Greek Prime Minister Alexis Tsipras’ office, said in a tweet that the report “is completely denied.”

Greece hopes enough progress will be made at Saturday’s finance ministers meeting to allow EU government leaders on Sunday to formally back a bailout program. The summit of the European Union’s 28 leaders has been billed as Greece’s last chance.

The eurozone ministers have to give their blessing to Greece’s bailout request to the European Stability Mechanism. Traditionally, eurozone ministers agree by mutual consensus. The task facing the new Greek finance minister, Euclid Tsakalotos, is to convince his skeptical counterparts that Greece deserves another bailout, which would be its third in five years.

Greece has received bailouts totalling 240 billion euros in return for deep spending cuts, tax increases and reforms from successive governments. Though the country’s annual budget deficit has come down dramatically, Greece’s debt burden has increased as the economy has shrunk by a quarter.

The Greek government has made some form of debt relief a key priority and will hope that a comprehensive solution will involve European creditors at least agreeing to delayed repayments or lower interest rates.