Image of the Week: A furious Michigan governor responds to an alleged kidnapping plot by two of the violent fringe groups the U.S. president indulges 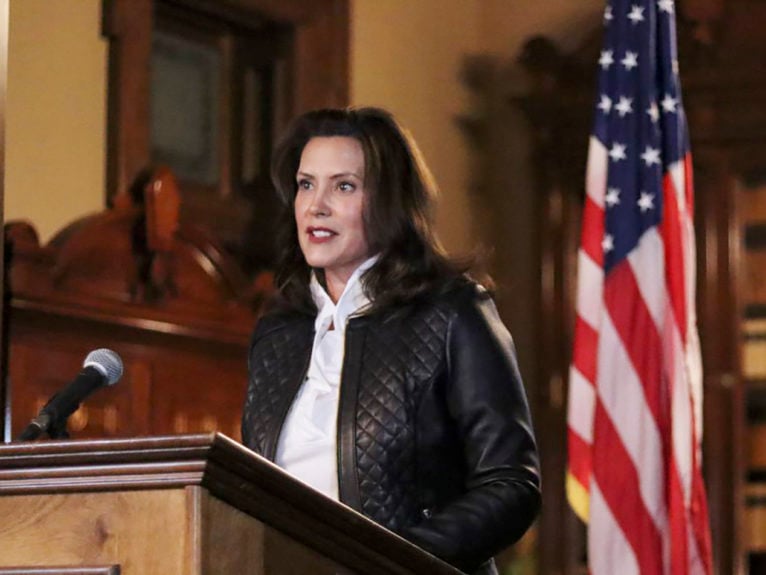 Whitmer speaking in Lansing, Mich. after the arrests. (Michigan Office of the Governor via AP/CP)

During this locked-down summer, many of us passed the time by picking up new hobbies. Some took up knitting. Many baked sourdough. Others spent several months planning a tactical kidnapping of their state’s governor because they believed she has “uncontrolled power” that must be checked by a vigilante militia to spark a new American civil war. Yes, instead of basking in Michigan’s too-short patio season, members of a militia group with a name ripped from a Marvel comics knockoff (the Wolverine Watchmen) spent several months training with firearms and plotting to kidnap Democratic Governor Gretchen Whitmer. Whitmer and the FBI, we now know, were aware of the plot early on, and just this week thwarted the men’s plans and arrested several of the men. Yes, this is an incredibly silly story. But it’s also genuinely frightening. For months, onlookers have worried—with increasing justification—that America could be headed for a new civil war. President Donald Trump’s refusal to promise a peaceful transition of power, should he lose re-election on Nov. 3, could galvanize millions of his supporters who believe the election is rigged. He blithely shrugs off, if not encourages, white supremacists and violent militias like the Watchmen, whose stated goal with the kidnapping, according to a state affadavit, was “civil war leading to societal collapse.” Rather than castigate their alleged federal crime, Trump victim-blamed Whitmer in a series of tweets that kicked off with an attack on what a “terrible job” she’s doing. Republicans and Democrats can debate whether Trump is actively courting these fringe conspiracy theorists. But one thing is certain: his refusal to outright condemn these people has given them an opening to, in the president’s own words, “stand back and stand by.”