Hamburg taught the world that the U.S. no longer matters 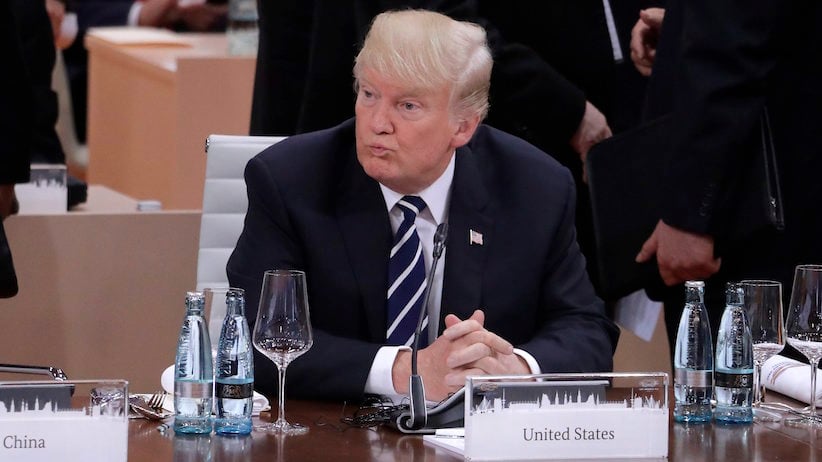 U.S. President Donald Trump waits for the beginning of the first working session on the first day of the G-20 summit in Hamburg, northern Germany, Friday, July 7, 2017. The leaders of the group of 20 meet July 7 and 8. (AP Photo/Markus Schreiber)

Summits are rarely noteworthy. That’s not to say we don’t take note. There are always hundreds of journalists, and every speech and communiqué is widely reported around the world.

But typically, the real substance of these meetings was worked out long ago, in email exchanges between diplomats and bureaucrats and in the occasional high-level meeting. The host nation scripts out every minute, all the official statements are agreed to in advance, and the press and participants know exactly what will happen and what will be announced before any of them even arrive.

And, on the surface, the same thing could be said of the G20 summit in Hamburg that concluded this weekend. We knew Trump would probably not agree to a communiqué supporting climate change action and we knew the rest of the gathered nations would not agree to water it down.

Nonetheless, it was still a remarkable moment when, in the very last minutes of the summit, it was revealed that 19 countries had signed the statement and the United States, alone, refused. In the world of diplomacy, this sort of impasse is incredibly rare and almost always avoided.

A year in advance, when the host nation begins to prepare for the event, they invariably choose a theme that the other countries will support. Diplomats shuttle back and forth to identify “announceables” everyone can agree upon. At bilateral leader meetings or ministerial summits, the details are further honed so there are no surprises, so all the participating delegations sing from the same song sheet.

Usually, the summit is only considered a success if any dissent is kept discreetly behind closed doors and not even hinted at in public. Even a seemingly innocuous statement such as “The Prime Minister and the President had a frank and open exchange….” is considered to be a sign that things went badly off the rails.

So, even though we knew it was coming, the fact that the United States stood alone in Hamburg, isolated from both its allies and rivals, is significant. It showed that the new Trump administration’s “America First” foreign policy actually means “America Alone”. And it reinforced the increasingly widely held belief that the decline of the United States is accelerating.

Decline, of course, is a relative term. By most major indicators, the United States is doing better now than it was a year ago. Employment is up, the stock market is doing well, and yet another new iPhone is only months away. Almost all of the long-term trends which have made America one of the healthiest, most successful nations on Earth, show no signs of abating.

But in terms of global power, the United States has far less influence now than it did a year ago. In fact, one could argue that Washington’s ability to promote American interests has not been this handicapped since the 1920s.

President Obama presided over a nation that seemed unwilling to assert itself against the rising influence of countries like China and Russia. Cosmopolitan soft power was preferred to traditional hard power. Secretaries Clinton and Kerry spent more time nudging and cajoling, then they did leading. Red lines were abandoned.

There is no question that by the end of Obama’s second term, the relative power balance between Washington and Moscow, Brussels, and Beijing had shifted. The United States was still the most influential nation in the world, but it was not as dominant as it had once been.

Under President Trump, in only six short months, that dominance has all but collapsed. Even mid-sized countries like France and Canada are running circles around Washington. And when the most important countries in the world gathered in Hamburg, no one really cared if Washington was going to play ball or not. The world has already moved on.

In fact, it is quite likely that the summit participants would have been willing to expend more diplomatic capital to ensure Italy was on board than they would’ve have spent on the U.S. Why? Because from Putin to Merkel everyone knows the President of the United States either doesn’t know what he is talking about, can’t deliver on what he promises, or is quite likely lying anyway. And that is indeed a noteworthy and historical milestone in world history.