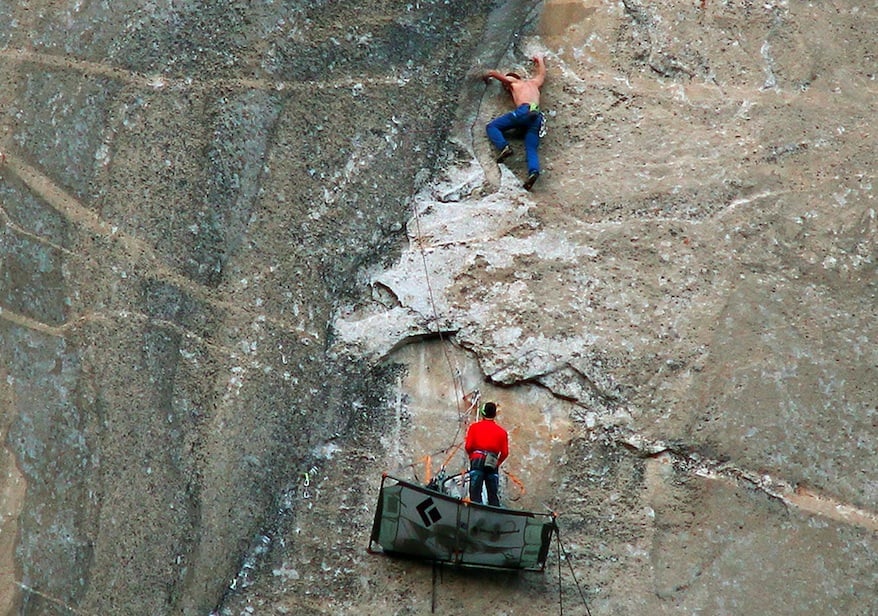 In this Jan. 7 photo provided by Tom Evans, Tommy Caldwell, top, climbs what is known as Pitch 17 with Kevin Jorgeson handling the line. (AP)

SAN FRANCISCO — Hands torn and bleeding, the second of two men attempting a grueling climb up a half-mile (800 metres) of sheer granite in California’s Yosemite National Park cleared one of the ascent’s most difficult stretches after days of failed attempts and waiting.

Growing crowds of onlookers at the foot of the Dawn Wall at Yosemite’s El Capitan peak broke into cheers — and some tears — Friday when Kevin Jorgeson finally grasped a razor-sharp hold that had eluded him, clipped an anchor to secure himself, then shouted in triumph, according to online accounts by colleagues at the scene.

Just finished the last 5.14 pitch on the #DawnWall.

“Pure joy,” Jorgeson wrote afterward on his Facebook page, next to a photograph showing his bloody, bandaged hands.

Jorgeson, 30, of Santa Rosa, California, and Tommy Caldwell, 36, of Colorado, are two weeks into what is billed as the first free climb of the vertical Dawn Wall to reach the 3,000-foot (900-meter) summit of El Capitan. Free climb means the men are climbing without the aid of pegs, ropes or other gear to help them ascend, although they are using safety gear to guard against what could be deadly falls.

Friday’s climb keeps Jorgeson in the effort, after Caldwell moved several segments ahead of him. Caldwell is now 2,000 feet (600 metres) up, about 1,000 feet (300 metres) from finishing. Support crews have said they hope the two men will reach the top by the middle of next week.

The last few days have been some of the most memorable climbing days of my life. Yesterday I finished the last… http://t.co/v7S9XDyFAb